-
Day 82. Mangalore, India. 94, partly cloudy.
Last night the Italian restaurant was transformed into an Indian restaurant, so we ate great Indian food there 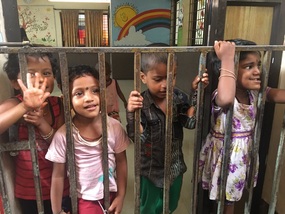 Children in Day Care
. As it was a buffet, we got done in time for a whole set by Clive, our fun piano bar player. We then went to the 4th performance of the production crew doing Elton John. We just can't let them down! This morning we sailed into Mangalore. In every cruise port in Indonesia and Malaysia, we were docked at a beautiful new, high tech cruise port. Here we pulled up next to a concrete pier, flanked by what looked like a burned out old warehouse. That kind of set the tone for the day! To be fair, the portion of the inside of the warehouse that we had access to, had been renovated and looked OK. Our tour took us first to a Cashew factory. This was a pretty big operation, and, perhaps the nicest part was seeing the beautiful children in the day care center. Other than that, the workers are 90% women, working 9 hours a day, mostly in huge non-air conditioned halls, hand shelling the nuts for $4-5 per DAY. How nice is that? Also the odor was pretty appalling. Next, apparently the Chamber of Commerce had been thinking, because these next stops were probably the only three properties in the city that are well maintained and manicured 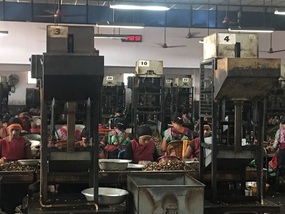 Women workers in Cashew Factory
. Honestly, riding through the downtown was pretty unbelievable, with the trash and the filth everywhere. However, our next stop was at an incredibly beautiful Christian Chapel. The entire interior, except for a few stained glass windows, was hand painted fresco. Even the columns were painter to look like marble. It was done between 1899-1900 by one artist. Very beautiful. Our next stop was at a private residence; kind of a nicely maintained mansion, with manicured grounds, on maybe 1/16 acre within the inner city. The owners greeted us, showed us around their house and serves refreshments. Our tour brochure claimed we would be meeting "a typical Mangalore family" here. No way was this "typical"!! Our final stop was to a very beautiful and quite large Hindu Temple complex. We were back to the ship by 1:00 for lunch, where we got to give Mathew a little something, as he will be seeing his wife and son overnight when we are in Mumbai. At 3:30 we attended a humorous lecture on Cricket. We watched the sail away with cocktails on our balconies, and went for a late dinner 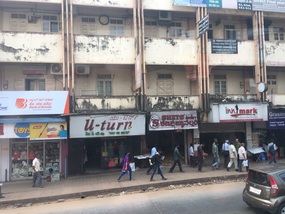 City street
. Being too late to catch the show, we ended the evening with a nightcap on the fantail.


Day 83. Goa, India, 88, mostly cloudy ( good thing as the cloud cover kept the heat down)
An aside, apart from the other issues, India is a bureaucratic pain in the butt!! The process of getting our visas last fall was a nightmare, but in addition to that, in each port we have to do additional paperwork, that has to be individually distributed to us before we disembark each morning. This process takes maybe an hour, to get everyone who is going ashore cleared.
Goa is an oasis in India that never came under British rule, but remained under Portuguese control throughout the colonial era. It, maybe coincidentally, maybe not, is also a bit of an oasis in other areas too (which isn't saying that much). We arrived at 8:00, but, for those bureaucratic reasons, didn't get off till maybe 9:15. We were greeted on the concrete pier -without a burned our warehouse, in fact with no warehouse at all- by an Indian version of a Mariachi band, and a King and Queen who gave the women a rose 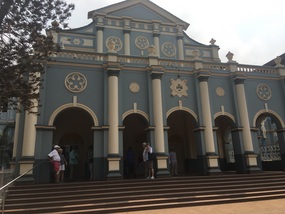 Church in Mangalore
. So for starters, they were trying very hard to put us in a good mood! Our "Highlight of Goa" tour, led by a really excellent tour guide named Mario, took us for 45 min. through numerous villages to Old Goa. The villages were a lot better maintained than what we have seen. The standard of living seems higher, the properties larger and cleaner and the streets somewhat garbage free. Many houses were painted (that in itself an improvement), in bright colors. Between villages, the filth remained apparent. In Old Goa we toured two neighboring 16th Century Catholic Churches. Quite lovely. We then went to a private residence for refreshments of local delicacies , and again, wanting to put us in a good mood,
beer was included! Our final stop was to a local fruit/vegetables/flower market. Of the 28 on our bus, only 9 opted to get off and tour the market, and all 9 unanimously agreed, no actually demanded, to skip the scheduled 20 min. of free time there. We got back in time for a mid-afternoon snack and beer, before DB and BS headed to the spa to try to steam out, then scrub out the smell of India, which seems to be in our pores and in our hair 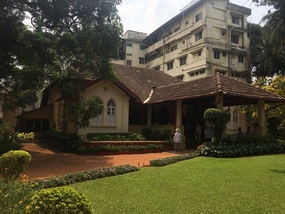 "Typical"home, more typical apt. Bldg.
. We had the requisite sail away cocktails on our balconies, then on to Ola's station in CR for dinner. We caught the last two tunes at the piano bar before the show, which was by an excellent performer who played 8 different instruments, sang and tapped. He was very entertaining -just great!

Day 84. Mumbai. 86. Partly Cloudy. Very humid.
We arrived in Mumbai at 10:00 Once again, everyone on board had to do another face-to-face inspection with Indian authorities before we were cleared to go ashore. This took 2 hours. But, we didn't care because we had decided to cancel our tours today. Our first tour was to be a 6 1/2 hour tour to 4 temples, one mosque, a synagogue and a cathedral. Canceling that was a no brainer. The second one really did sound great - "Mumbai by lights". It was starting at 6:30 and was a 4 hour tour to a night market, a "Bollywood" movie and a nightcap at a trendy nightclub. Only problem is they lock the gate to the port at 10:30 PM, and if you aren't in, you ain't getting in! The possibility of spending the night at a last minute hotel in Mumbai was kind of unappealing! (Another aside..clearly we are not loving India, but, to be fair, the people we have had contact with..the tour guides in particular and even our crew from India, have all been wonderful, smart, witty, caring people) Anyway, we had an unscheduled afternoon of FPA. Not a bad thing! Plus, on board, the staff has planned an evening of a fabulous Grand Deck BBQ under the stars on the pool deck, complete with live music, singing and a dance party, with our production cast.
Other Entries
-