Mumbai and 2 Days at sea 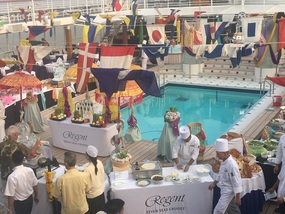 Grand BBQ
. So colorful, fun..just great sounds, scenery and smells ( so, we definitely made the right choice). After, we even caught the first set at the piano bar, before retiring. Today, the guys are staying home and D&BS ventured out on a tour to Elephanta Island, a UNESCO World Heritage site. First we boarded a very rickety boat at a pier next to the Gateway to India Arch, and the historic Taj Mahal Hotel. We traversed the harbor for an hour before arriving at Elephanta Island. Here, two temples that had been carved into the solid basalt rock mountain between the 5th-8th centuries were unearthed by the Portuguese in the 1600's. One is Hindu and the other is Buddhist. We only visited the Hindu temple. ( Apparently the other is nor well enough preserved for tourists). After arriving, we boarded a tram for a 1/2 mile ride down the pier to the base of the mountain. We then trekked up 180 steps carved into the rock and several areas of fairly steep incline, before reaching the cave. This whole way, probably 500 yds., was shaded by tarps and lined with local vendors 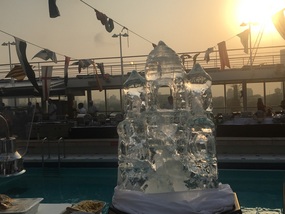 Tan Mahal ice sculpture at BBQ
. This is a very popular tourist attraction, and we were very fortunate to be among the first to arrive, having left the ship at 8:00AM, so it wasn't too crowded. A bit winded and hot, we finally arrived at the cave and it was so worth the effort. It was totally mind boggling, sort of a Hindu version of Stonehenge, or Easter Island. The Temple, now a monument, was huge, a 90'x90' hall, perhaps 40' tall. There were rows of geometrically precisely placed columns and on the walls were many, many huge intricate carvings depicting the major elements of the Hindu religion. And all of this was carved out of solid rock with a hammer and chisel, and no auto-Cadd, in the 5th century. Phenomenal..they make one feel very small and insignificant. One little hitch was that this Island is quite strategically placed in Bombay Harbor, so was used as a fortress by the Portuguese in the 1600's, and the soldiers apparently liked to use the carvings on the walks for target practice, so, not all images are well preserved, but many are 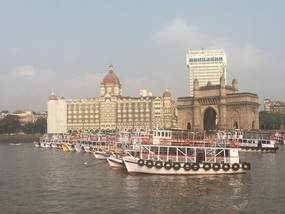 Gateway to India and Taj Hotel
. Our guide took us to the major images and explained the significance of the elements in the depictions. That took about 45 min. After that we had about another 45 min. to explore on our own, and get back to the boat, for our rickety ride home. In the harbor, visibility was 1-2 miles, due to haze, fog, smog, or God knows what in the air. There are ships anchored everywhere; in our limited viewing range we could see at least 40 oilers, barges and shipping containers. And the water was murky brown, again, littered with trash. Best not to look at the water. But, that's apparently, India, and the Elephanta Cave experience was positively mind blowing, making the trip here totally worthwhile. D&BS found it necessary to hit the steam room and showers at the spa again to cleanse. We had dinner at Sette Mari, then on the the show, the 4th performance (one each leg) of "World Beat" by our production cast. They change it up a bit each time, and this one was really good. 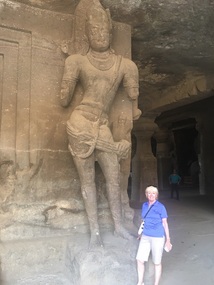 Sculpture in cave
. At Sea. 84, sunny, breezy, seas 1-3'.
We woke up to clean blue water, and a beautiful day! We had breakfast in CR, then DB and BS walked a mile, followed by poolside til, the morning lecture on the early explorers of the world. Jamie's noontime game was individual -DB won. What we win is points, redeemable for Regent logo hats, shirts, etc. we have so many points now we will have to buy another suitcase to bring home all the stuff! We had lunch by the pool, but our table just happened to be in a wind corridor and we managed to loose 4 drinks, mostly into DB's lap, before we moved to a calmer table. We had a nice quiet afternoon of FPA. At 6:00 was the " Krew Kapers" show, and the crew performing are just so sincere, and there is a whole lot of talent amongst them! Our favorite Ola, is one of the stars. After that show, we had a drink, followed by dinner in CR with Paul and Rose. We then went to the later show, the second by the one guy, Danny Elliot, who plays a zillion instruments, sings and dances, and was very entertaining.

Day 87. At Sea. 84, sunny, seas 3-5'.
Another spectacular day, weather wise. After breakfast, there was an early lecture on Piracy, yesterday, today and tomorrow. It was fascinating, as our amusing lecturer focused on female pirates of the past. There are fascinating stories, and one infamous female pirate, Ann Bonny, who got caught and escaped hanging ( because she was pregnant) may well have escaped prison and settled down in Charleston, SC. He concluded the lecture with "today"piracy, as we are and will be in pirate ridden waters for the next 10 days. He was very amusing, as well as serious. There are probably already "security advisors" a.k.a. Israeli commandos on board. Also apparently in the next few days, we will have a drill on pirate alert levels and what to do, although supposedly the pirates are not that interested in cruise ships anymore, and the waters are patrolled by international navies. After that lecture, we went to a cocktail making seminar, complete with samples. On to Jamie's noontime game (BS cashed), followed by a French lunch by the pool. What's "French", but Frog Legs- savored by BS and DE, sampled by G, and totally YUK! to DB. A note: We are learning a lot about the world, it's history and it's people and also a lot about ourselves on this journey. Tomorrow we will arrive in Dubai, having gone 1,200 miles from total abject poverty to total opulent wealth. We are learning a lot! We enjoyed some afternoon, FPA, then attended a cocktail performance by our very talented troubadour/lecturer. We enjoyed dinner at Prime 7, got out in time for a complete set at the piano bar, and retired before the evening show. Lovin' these sea days!
Other Entries
-