-
Day 88. Dubai. 80-98.Sunny, but low humidity, so it didn't feel too hot.
It's Sunday, so champagne breakfast, which D&BS had, literally, but the boys actually did eat something 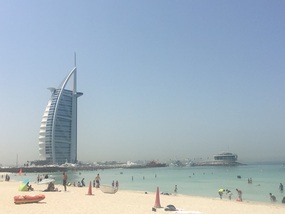 Dubai
. We sailed into Dubai arriving at 10:00. The water was calm and clear(!), but it was disappointedly smoggy, so we got a very hazy view of the skyline. Our first tour today was "Discover Dubai" and we do believe we got a great overview of this beautiful city. Firstly, it's cleaner than Disney World! Not a scrap of trash anywhere. How refreshing was that! We stopped for a photo op at a beach overlooked by the iconic hotel, the Burj Al Arab, then on to the
Jumeirah mosque for another photo op. We then went to a really unique museum that chronicled the history of Dubai through dioramas. Next we boarded a little "Abra" for a ride across Dubai Creek. There, in Old Town we visited the spice and gold markets. Of particular note was..markets..and they were totally clean! We got back to the ship too late for even a late lunch, so settled for a beer, before a quick change and off on the evening tour. This was a special event for the World Cruisers, so some 300 of us went to this magnificent "camp" in the dessert, where we were treated to dinner and wine, plus, camel rides, Henna tattoos, and entertainment including belly, fire and emerati hair dancers 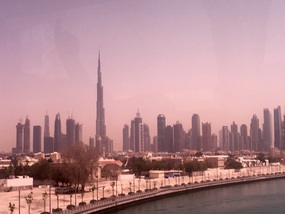 Dubai skyline, tallest building
. DB &BS rode the camel. What a kick, but getting off was a pretty hysterical! Thank God no one took pictures! We got home at 10:00 and happily retired.

Day 89. Abu Dhabi. 80-98. Sunny and again, fairly low humidity.
Our tour today was "Abu Dhabi City Tour", and we certainly did get a good look at the city. We started by driving to the Sheikh Zayed Grand Mosque, which is astoundingly beautiful. This is a giant white marble, graceful and complex structure. Everyone had to be dressed in accordance with a very strict code, so our guide went over us with a fine tooth comb, doling our shawls to women who's pants were too tight or not quite long enough, or shirtsleeves not covering our wrists. We then went through the first checkpoint where BS was banned, because her shirt was too transparent (not!). But our guide found one last shawl to wrap her in, so they let her by. At the next check point, we got through the scanners and were outside in the bright sunlight half way up the white marble stairs when a guard came running after the group and pulled Dori out, claiming her pants ( black and tan elephant print fat pant, same as BS and several others had on) were transparent, so she was banned 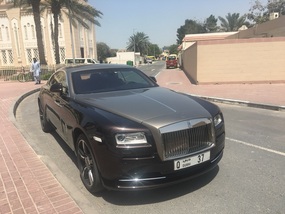 Rolls w/$80K vanity plate
. Our guide came back, but had no more shawls. She pleaded with them and pretty soon the supervisor came out and they had Dori on a pedestal with the bright sun behind her, and three of them looked her over and over, and in the end declared, that with the bright sun behind her they could make out a shadow of her legs in the pants, so, no good, OUT!! Don, ever the gentleman, left with her, and they sat on the air conditioned bus, along with 7 others who didn't even try or want to go in, for an hour, while the others proceeded on the tour. Our guide the previous day had told us the reason for the dress code was that the men don't want any distractions when they pray. Certainly, the possibility of a faint shadow, only in bright light, of a 71 yr. old fat lady's legs would have been a terrific distraction, so I really can't fault them. On the tour, guards followed the group, pointing out if a women's head cover slipped too much, so much so that George and BS were fearful of raising their arms to take pictures; George because no tattoos were allowed and he had on a short sleeve shirt and BS because she her sleeves were loose fitting and she worried her wrists might show

Abra boats
. After the Mosque, our tour continued with several photo op stops, and the city really is clean, new, and beautiful. Of interest, in both Dubai and Abi Dhabi, unlike Singapore and Australia, there were NOT, cranes, cranes, cranes everywhere, so perhaps these cities are no longer exploding. Also, the laws, customs, rules and regulations are pretty overwhelming to us Westerners. It's almost a police state. For example, there are no homeless, because the government takes care of the 10% of the population that are citizens; for the ex-pats, you will never become a citizen, and can only come if you have a job, and if you lose your job, you are deported! Very simple! Who can, how to, and how much booze one can buy annually is another totally regulated matter, and its regulated in a cast system way, based on your wages. All in all, not our cup of tea ( because we'd rather have a beer!) We got back to he ship by 1:00; had poolside lunch, followed by naps for all. We did sail-away cocktails on our balconies, and Earnhardt had Barnes over for salad and pizza. We just weren't up for anything more than a relaxing quiet night.
Other Entries
- 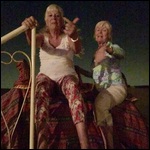