At Sea and Oman

-
Day 90. At Sea. 86, partly cloudy.
We had a very busy day today, starting with breakfast in CR, then a very interesting lecture by an archeologist on the "Ancient Near East, Part 1" , the beginnings of civilization in the Mesopotamia area 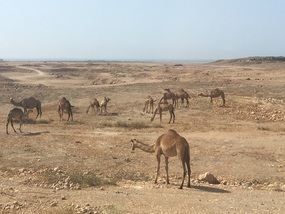 Camels
. Immediately following that was a lecture "The day you life changed-climate change circa 535 AD". This was about perhaps what, where how and why the earth was suddenly thrust from thriving and advancing civilizations, into the Dark Age. Very fascinating! Next Jamie's noontime game ( only DE cashed), then poolside lunch. We also had an afternoon lecture about Marco Polo, and how he pretty much single handedly started the Great age of exploration and trade. Not much nap time today, as we had to get ready for the "Block Party" ( cocktails in the hall) followed by a Virtuoso cocktail party, hosted by newly embarked and owners of our very own Island Travel, Jim and Marty Buckley. We had dinner in CR with Kidds and Fishers, then cause we won't be allowed outside at night for the next 5 days ( see below re: piracy) we skipped the show and had an after dinner drink enjoying the night air on the fantail. 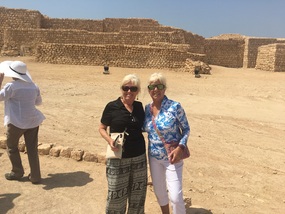 At archeological site
. They are circulating as if they are guests, except they are 50 yrs. younger than any guest, and are incredible fit! Lots of tattoos on one of them-not too hard to pick out. Anyway, the scoop is they are all American retired special forces, who contract this work and do it 3-4 months a year. They will be on board til Israel, through the gulf of Oman, the Red Sea, the Suez Canal to the Mediterranean, or almost two weeks! Yesterday a high speed zodiac pulled up along side our boat, and we came to a halt in the water as firearms and ammo were transferred to our ship! (Abu Dhabi does not allow firearms to be loaded, so we had to do it this way). Out first activity today was a pirate drill. We had to evacuate our rooms, with our balcony doors locked and curtains drawn, and we were kept/locked in the hallway. We were told, (we didn't have to this for drill purposes) we might be instructed to lay down as the captain might be going to take evasive maneuvers, and the ship would be pretty violently rocking from side to side 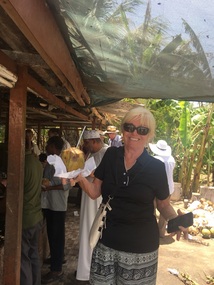 Coconut milk
. This drill lasted about 20 min. We were also instructed that for the next 5 days, we are in a sunset to sunrise blackout. All exterior decks ( e.g. The fantail) will be closed, all unnecessary exterior lights off and curtains drawn throughout the ship. We are to keep our cabin lights off when we are not there, and our curtains drawn. Apart from all that excitement, today there were three lectures. The morning lecture was on Alexander the Asia Major General. We followed that with Jamie's game ( took team 2nd), then a Tex-Mex lunch at the pool. The afternoon lectures were The Ancient Near East Part 2, and Navigation Through the Ages. We had trouble keeping our eyes open in the first one, so all skipped the second. That gave us a little more time to shower and dress for Formal Optional, then on to the Captains Welcome Party. We ran back from the Captains Party, jumped into something comfortable and ate in at Barnes.

Day 92. Salalah, Oman. 86. Sunny.
Salalah is definitely like no place we have been, ever seen, will be, or imagined. It's very different in many ways from the other Arab states. Our tour "Arabian Heritage", took us first on an hour drive along the coast to the tomb of Bin Ali ( didn't catch who he was, but perhaps the person who brought Islam to Oman ?). Next we drove to an archeological dig of the city ruins of Samhuran, then on to Taqa Castle and finally to a fruit stand for a drink of coconut milk. It was all fascinating. But, for us, these stops were not the defining part of our tour. More importantly , our guide was very good and gave us a really good overview of the recent history of the country and its cultures. The country was definitely third world until in 1972 when the current, British educated King, deposed his father, took over and revamped the entire country. For example, before 1972, only boys went to school, and school was only through grade 6. Today everyone goes to school and it's free through PhD, complete with a stipend for those post grads! We happened to have our lecturer, the archeologist, on our bus, and she certainly knew the questions to ask! The scenery along the way was so unusual; the closest resemblance might be to the high desert of southern Utah/New Mexico, with frankincense trees instead of sagebrush. Everything from the landscape to the architecture was white/sand colored. No other colors. We saw several herds of free roaming, but domesticated camels. We saw very few people anywhere, including "down town" Salalah, yet there was roads and bridge construction everywhere. Our guide claimed that the country was growing, but not as fast as the other Arab states. They are trying to proceed in a controlled and managed fashion. It looked to us like they are building the infrastructure with the ultimate goal of attracting lots of 5 star resorts. They definitely have the natural resources for that, in that they have miles and miles of pristine beaches, a much more moderate climate that the rest of the Gulf region (year round temps range 70-90), and they are not only more relaxed in their religious tolerances, but are a neutral country and have no organized terrorist enclaves. And clean; Oman is so clean they have people cleaning the camel crap off of the highways. If you are caught littering ..1 week in jail and 300 hours of community service ( presumably cleaning camel crap off of the highways!)
We had a sail-away show by our troubadour, then a few martini's with the piano bar guy, before dinner in Prime 7. Still awake, we went to the show, " Great American Song Factory" (4th time) by our kids, the production cast. As we keep saying, we have to go. It's like, if you were their mother, could you not go to see your kid perform? Plus, they are really, really good! We are now looking forward to 4 days at Sea before the final sprint!
Other Entries
-