-
Addendum:
Errata: we said parts of the path into Petra were 200 yrs old 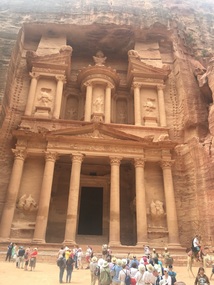 The Treasury, Petra
...missed a decimal...that's 2000 yrs. old! And here is a better picture of the Treasury.
Also re: yesterday, we had an armed guard on our bus and following us on the tour. Also, about 60 of the crew also got to go to Petra. We were so happy for them ; Ola, in particular, as well as several other of our favorites; this was the one place many of them really hoped they could see, and they did! We believe that Regent really takes good care of the crew. We have "free"tours, but Petra had a surcharge to us of $159. The crew paid a total of $60 to go, when the entrance fee alone is $70!

Day 98. Safaga, Egypt. 90, sunny.
We arrived at 9:00 and left for tour 9:45, so got to sleep in a bit. Our " Desert Jeep Safari" tour took us in a 17 Jeep caravan(ours was #2) with each vehicle holding 4-6 passengers. We drove an hour along a shoreline highway, passing many, many high-end beach resorts. We were enclosed, on benches, facing each other in the back of our Jeep, and our cowboy driver and a tour guide rode up front. Our driver knew a very little English, but he had an excellent command of the "F" word, as in "F**king police! ! ! You have f**king police in you country too?" He liked to play music from an Egyptian radio station really loud, he was probably 60, didn't believe in highway lanes, drove like a bat out of hell...we just loved him!! Anyway, after this drive up the highway, with the Red Sea on our right and desert, then mountains on our left, we suddenly turned into the desert 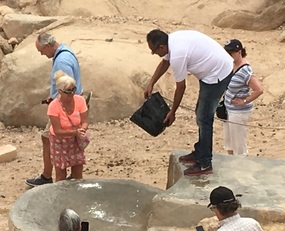 At Bedouin well
. We were on a sort of desert road for maybe 5 miles, then we turned off onto ruts in some places, and just plain desert in others, for another 5 miles. By now the caravan had sort of broken up with Jeeps all over the place. The caravan reconvened at a desert well, where we got to see that work. From there we went into the Bedouin camp that owned this well, for a sampling of the Bedouin life. It was all really interesting. A young girl did a bread making demo. She was probably 14, and we are pretty sure she was married. We saw the huts where they live and got to peek inside. Two young men did a traditional dance and three old men played hand made instruments. There was an "optional" camel ride, and only one of us literally jumped on that offer. After about 1 1/2 hours in the village, we reboarded our vehicles and headed back out of the desert to home. Our loose cannon driver didn't disappoint us on the way home either. He got quite the kick out of giving us a thrill! Back home we went to a cocktail show by our Troubadour, had another cocktail at the piano bar, had dinner in CR, then retired early as we have to get up at the crack of dawn tomorrow 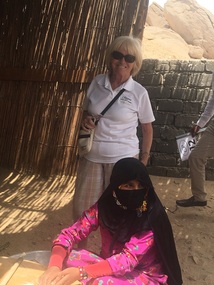 Day 99. Safaga (Luxor), Egypt. 90, partly cloudy and breezy.
We were overnight in port, as today is the reason we are here-excursions to Luxor!
To get to Luxor from a cruise port takes 3 1/2 -4 hours, so the excursions were all scheduled to leave at 6:45, planning on getting back by 8-9pm. So off we went at 6:45. We traveled through the desert and over the Red Sea Mountains for a few hours before reaching the outskirts of the area that is fertile from irrigation from the Nile. Then through farm land and villages for another few hours. Interesting scenery, with many security checkpoints along the way. Again, we did have an armed security person on our bus. Once we were in the valley, we pass loads of wheat fields, donkey carts, and on pretty much every corner, which was every mile or so, there was someone, and not a police someone, with a rifle on his lap or over his shoulder. Finally, around 11:00 we arrived at our first stop, the Luxor Temple. We spent about an hour with our very knowledgeable guide, exploring this magnificent structure dating from 1300-1100 BC..that's BC!! After the poverty we had driven through, it's hard to imagine 5 star hotels here, but there are several in Luxor, and we had lunch at one, the Achti Resort. After lunch we drove another 45 min. to the Valley of the Kings. There are some 66 tombs that have been discovered here, but only 5 are currently open to the public. Our ticket allowed us to explore any three tombs, and our guide led us to the ones that were, in her opinion the best ones to see from the perspective of the level of preservation and size 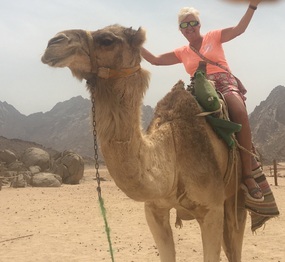 Camel rider
. All three were different in many ways, but just spectacular. It's so hard to imagine these huge tombs being carved out of granite and elaborately decorated with drawings and carvings, from floor to ceiling, including the ceilings, and all this done in that 1300-1100BC the frame. Pictures tell the tale, but no cameras allowed in the Valley of the Kings. After our extensive visit here, we had two more photo op stops, at the Hatshepsut Temple and at the Colossi of Memnon, before beginning our trek back to Safaga. We got back, along with several other tours, around 8:00 pm, but knowing this would happen, we had a "come as you are" Italian buffet upstairs. Well, they were slammed with people and we were lucky to get a table outside, which no one else wanted cause it was cool and breezy. No problem. Shortly the head waiter appeared with wool blankets..so here we were, all 4 of us, in Egypt, in April, where it was 105 the day before we got there, wrapped in blankets, eating Italian! Actually the wind died shortly and after dinner we had a drink on the fantail without the blankets! An amazing day!

Bedouin dancers and musicians
. At Sea. 75 and breezy. Overcast.
We were on our way to the Suez Canal, which we approached and anchored at around 10:00pm tonight, to be in queue for a 5:00 am entry into the Canal tomorrow morning. Our at sea day started with a Good Friday "Passion of the Christ". We then had a great lecture on the long and short of the canals around the world, as we are about to enter the Suez Canal. Our archeologist entertained/informed us most of the afternoon with a lecture on Masada, then a film on Jerusalem. Now off to a Virtuoso cocktail party, then.... Ok, someone had suggested to Jamie that we have an "Elephant Pant Party" 'cause so many of us had bought Elephant pants. Well Jamie took it to a whole new level and made it a "99 Arabian Nights" party on the pool deck. Everyone wore all the stuff they bought and will NEVER wear at home! What a kick. Dinner in CR. Home, nighty, night!!
Other Entries
- 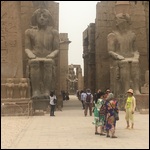