-
Day 105. Rhodes. 65- 75. Sunny.
Last night the Hilton Head contingent had a special surprise Southern dinner in CR for the Buckley's 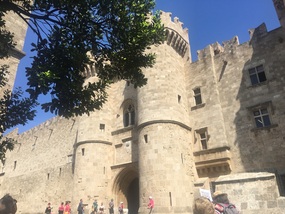 Entrance Grand Masters Palace, Rhodes
. They will be leaving us in Athens and have been a tremendous asset to us all, both technically and personally. We arrived in Rhodes at 10 am and it's obvious we have made it back to civilization! There are 4 big cruise ships in port. ( It is Easter week and all the European kids are out of school). The water is a beautiful clear turquoise, and the weather is perfect. Our travel Agency, Virtuoso, had an exclusive tour planned for us here today. About 34 of us left shortly after docking and were taken on a scenic drive along the coastal outer walls of the city, then up Mt. Smith to view the ruins of the Acropolis of Rhodes. We then descended the mountain and began our walking tour of the Old City. This City has structures dating from the 3rd century, 5th century and the 14th century. It had been preserved and renovated over the ages. The city is walled and moated by three moats. It is all quite unusual and beautiful and one could well spend several days exploring this fascinating city. Our tour took us touring the Grand Masters Palace, with its superb collection of floor mosaics dating from 3rd-5th century 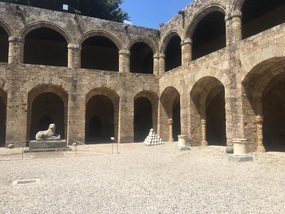 Hospital of the Knights, Rhodes
. We then walked through narrow cobblestones streets to the Hospital of the Knights, which we also toured. We continued on through narrow streets lined with shops, where the vendors do NOT accost the passing tourists, to a wonderful little cafe, with tables set up outside under a canopy of trees, for lunch. Lunch consisted of a multitude of Greek tapas, followed by a main course of a veal stew over rice, dessert of baklava and ice cream, and of course, unlimited wine. It was wonderful. After lunch, most of us opted to wander on our own through the shops before making our way out of the city, with then a short walk back to the ship. Were were pretty tired and not at all hungry, from our big, late lunch, so we had a few sail-away cocktails in the room then room service of soup, crackers and cheese and chocolate ice cream. Yum! We watched a fun movie "Who gets the Dog"..

Day 106. Santorini, Greece. 65-75. Sunny am, cloudy pm.
Everyone said, "Just wait, Santorini will blow your socks off" and everyone was right 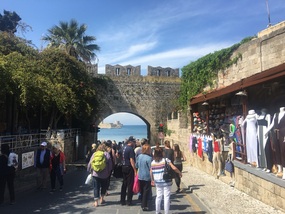 Gate of the Virgin Mary, Rhodes
. This place is so unusual and so beautiful! We left the ship by tender at 7:45am to the port of Athinios, where we boarded busses, climbed the cliff and traveled over the top of the world to the town of Oia, high on the cliff, where our guide oriented us then set us free to roam on our own for 1 1/2 hours. We first went to the "must see" overlook of the town and it's beautiful blue domed churches and chapels. We spent some time roaming through the unique shops ( again with very passive salespeople). We still had 1/2 hour, so we found a roof top cafe/bar and had a local "Red Donkey" beer while looking out from what seemed like a mile high, over the town and Caldera of Santorini. Just magnificent. From Oia, we drove to the highest spot on the island, Profitis Ilias for a photo op. Wild flowers were in bloom and prolifically covering the rocky slopes, making the scenery even more spectacular. Then we went to Prygos village were many climbed the many steps to see a castle and others (us) found a local cafe and

Caldera of Sanorini
...guess what! Our next stop was for a "snack" at a local restaurant, before proceeding to the town of Fira. Here we walked quite a ways up to the town center, then we were set free to wander, shop, eat, drink or whatever we wanted, for however long we wanted before making our way to the cable car which took us to the tender at the bottom of the cliff. Taking donkeys down the 600 steps was another option which was tempting for one of us, but sanity prevailed. We wandered in Fira some, getting back to the ship 4:00ish. Another thing that made our visit here so special was we were the only ship in town, a very unusual occurrence during tourist season, so we had no traffic, and roaming in the towns was a breeze.

Day 107. Athens, Greece. 55-65, cloudy.
This is apparently not typical Greek weather, cause we had to unpack the winter clothes this morning. But, no worries, we have plenty of them! We had one of the best tours of our adventure today, and it was a Regent Exclusive, which means we paid a premium, but it was well worth it 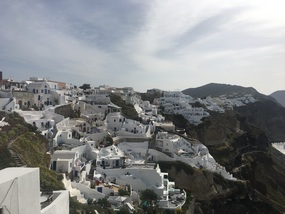 Residential Oia, Santorini
. It was an 8 1/2 hour tour, starting at 8:00am, and there were only 12 of us on a regulation 45 person bus. We drove 1 1/2 hours along the coastline of the south eastern peninsula of Athens, through beautiful villages to Cape Sounion. Here we spent an hour exploring the 5th century BC ruins of the Temple of Poseidon. We were the first group to arrive here so had a really spectacular experience, with just 12 of us tourists alone, experiencing this magnificent archeological site. Our tour guide led us to the top of the site, explaining the historical details, then gave us 45 min. to explore/take pictures on our own. It was 55 degrees with a 20 mph wind on the top of this hill that was the fortification that protected Athens 7,000 years ago! We were awed! We returned via the same shore route to Athens proper and had a really great lunch at the very chic Metropolitan Hotel. After that we reboarded our bus for a tour of Athens, where we weaved for 45 mins. through the downtown area and saw several historical structures. But..then...the piece de resistance was The Acropolis. OMG. With our guide and ear phones, we climbed 80 steps to the most unimaginable, spectacular, magical place. We had all read the history books, and, yes, there is the Parthenon, the size of a football field, but also, the totally of Acropolis is actually 4 acres, with a stadium, a huge gateway into the temple and a really beautiful temple to Athena. It is totally overwhelming. Our guide left us after getting us to the top, explaining the structures all the way. We had another hour to just roam and enjoy on our own before we had to make it back down those 80 slippery marble steps. OSHA, not so much, but any place in the good old U.S.A. But actually that is a real great part of the antiquity...no OSHA! We got back at 4:30 for a visit with a new best poolside afternoon friend, Margarita, henceforth to be called Maggie. Then safety drill, sail away party, and dinner in CR with sweet Ola.
Other Entries
-