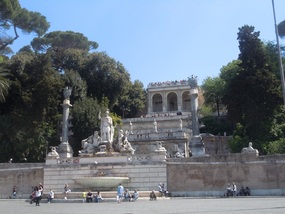 Populous plaza
. We left the port a little after 8:00 and got to the center of the city by 9:30, where we could roam around on our our or walk with our guide to some of the more famous landmarks. We stayed with her to the Spanish Steps and then to Tivoli Fountain. We were to meet back at the bus at 12:15, and it was now 11:00, so we left the group, heading back to Piazza de Popolo, giving ourselves enough time to stop at an outdoor cafe for a beer and snack. We got back to the bus on time, but the guide and about half of the rest of the group didn't make it back til 12:50! We knew her walking tour was too ambitious, which was why we bailed early. Anyway, we were upset because we had a 1:00 appointment to meet our Vatican guide for a VIP tour there. We did get to the guide on time, and it is interesting, as there must have been 3,000 people waiting in line to get in, and our group, along with other prearranged groups, just walked past them through security and into the lobby! The place, however was mobbed, but our guide claimed it was a quiet day 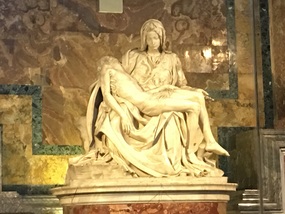 Piata
. We donned earphone for our audio, via our guide, portion of the tour. All in all, we were 3 1/2 hours touring the Vatican with this very knowledgeable and thorough guide. We toured most of the museum areas, ending in the Sistine Chapel, where we just quietly spent 15 minutes absorbing the totality of it. And it is more than amazing, and not a thing like we had envisioned. After the museums, we entered St. Peter's Basilica, where we spent over an hour, with our guide explaining almost every statue, nook and cranny. The marble throughout the Basilica is exquisite. George thought, by comparison, the St. Peter's Basilica was way more impressive than the Grand Mosque. Of course, I wouldn't know, having been thrown out of the Grand Mosque. Finally we entered St. Peter's square and got to see the Swiss Guards and the Pope's balcony. At this point, now 4:30, we had been walking/standing for 7 hours ( less a few minutes for that beer), traveling, per the Fitbit, about 6 miles. After a brief stop at the Vatican store, we boarded the bus, spent another hour having a "panoramic" tour of the center of the city, before returning back to the pier 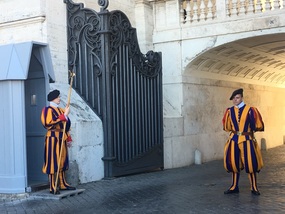 Swiss guards
. Back home, as so many tour were returning late, we had a relaxed dress code and a buffet Italian dinner upstairs with John and Sylvia. We did make it to the show, a laugh-out-loud comedian, before retiring.

Day 112. Monte Carlo, Monaco. 60, rain, mostly cloudy, then more rain.
We were at sea all morning, docking at noon. It was cold and rainy, and the captain had to call for tug boats to help dock as a front was moving through, making it windy and dangerous for coming in, with a very narrow entrance to the harbor. We had canceled our tour today, as there was a World Cruise Exclusive Event tonight and we would have only had 30 min. to go from touring grubbiness to formal. It partially cleared around 1:00 so we walked to town, past the mega-yachts, but Town was in disarray, as they are preparing for the Grand Prix in late May and have put up stands and barriers, so we really couldn't easily access the cafes and shops. Back at the ship we got ready for the big Event, a formal evening with dinner at the Cafe De Paris then time at the Grand Casino 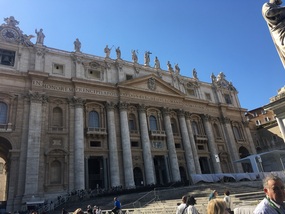 St. Peter's square
. Well, basically, the evening was a disaster, in almost every way. First, getting 300 people organized and onto buses that had to leave one by one, several min. apart, was an issue. Then getting those 300 people across a street and around a corner, then 1000' in the rain was interesting. Then getting them up 2 floors with only one elevator that holds 10, was another issue! The very large room for the dinner had terrible acoustics...bottom line..we bailed after the appetizer, to hit the casino. Well it was raining pretty hard, and to get to the Grand Casino was a walk in the rain across a plaza, so we just stayed at the casino at the Cafe De Paris, and only lost 25 Euros, before the buses started to take us back. That was another adventure, because it was pouring, and everyone was dressed to the hilt. We had to venture back those 1000', which were on marble slates in the rain. Poor Jamie, who fell once, was in his Tux, now in bare feet, cause leather and wet slate don't mix, in the 55 degree weather, running umbrellas back and forth between the cafe entrance and the buses 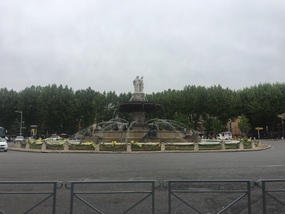 Fountain, Aix-en-Province
. The whole evening, which was supposed to be so special, was such a disaster, that it was actually getting to be hilarious ( except for Jamie falling)! When we got back, we immediately went to the piano bar, cause we wanted some entertainment, or more likely, wanted a drink. Well, also amusing was that about 100 other guests also had the same idea, so we had 100 people jammed into and sitting/ standing in the passageway around the piano bar, which is an intimate area seating 35! Fortunately for the piano bar guy, whom we love, the Director of Entertainment for the cruise line happened to be on- board, so he got to see how popular Clive, the piano guy is!

Day 113. Marseille, France. 48-58, North winds from 20-40mph.
I think Bobby Sue and Don took the spectacular weather we have had for the entire cruise ( except San Diego) with them, cause, it just hasn't been the same without them! Today, in beautiful south France, which boasts 300 days of sun a year, we never saw the sun and were all freezing, including our guide! However we did have a great tour, albeit another long one 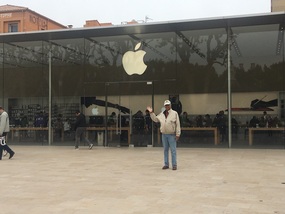 Landmark, Aix-en-Province
. (Note to self: if you ever go on a very long cruise again, the further you are into it, the shorter your tours need to be. ) We first drove to the very charming town of Aix-en-Province, about 20 miles north of Marseille. We did a bit of a panoramic tour of the outskirts of the city, before disembarking the bus for a 1 1/2 hour guided walking tour of the old inner city. We entered an old cathedral, roamed past a flower, then a vegetable market, down alleys lined with pastry shops, candy shops and dress shops. We finally arrived at the Cours Mirabeau which was lined with trees, cafes, fountains and street vendors. This incredibly charming city was the home of Paul Cezanne, who immortalized it in many of his paintings. We were set free here for another 1- 1/2 hours to explore the shops and cafes at our leisure. It was so cold, most of us headed for the nearest cafe to warm up! After our free time we met at one of the outstanding landmarks of the city, the Apple Store, where we were to meet our guide and bus. Most of us got there early and took advantage of this iconic landmark, to glom on to the high, high speed internet and update our OS, apps, etc. Back on board, we returned to Marseille, where we did a panoramic tour of this city, ending at the Notre Dame De La Garde Basilica, where we climbed 150 steps to visit the church and enjoy the 360 degree view of the city. We returned to the Old Port, where we again had about an hour of free time to shop, roam, or, in our case, sample a local beer. We got back to the ship, just about cocktail time. We plan to eat in tonight, trying to warm up. According to the Captain, later tonight we will have 45 mph winds, and tomorrow in Barcelona, the wind will die down, and the sun will be partially out, but a high of 60. BS and Don, where are you when we need you
Other Entries
-