Barcelona, Day at Sea and Gibraltar

-
Day 114. Barcelona. 48-58, Sunny, light breeze.
At 7:30 last night we decided we just couldn't stand the thought of another 8 hours of cathedrals and churches, so we ran to Destination Services and exchanged out "Iconic Landmarks of Barcelona" tour for a tour of the Torres winery! We really enjoyed our day, and did get to see Barcelona, to boot! The tour started with over an hour of a panoramic drive around Barcelona, before we headed to the wine country 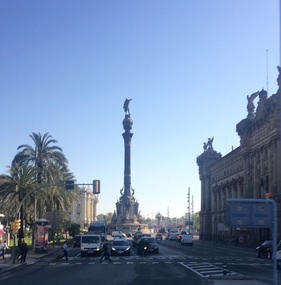 Christopher Columbus Memorial, Barcelona
. The drive to the winery was very scenic; sort of like driving around in Napa. The winery was an ultra modern, high tech operation. It is and has been, family owned, for five generations. The only quaint building on the grounds was the family residence. After a stop at the reception area, we boarded a "train", really a tram, for a maybe 2 mile ride to the production area. We were off-season, so no harvesting or pressing was going on-just aging. Our guide explained the production process for red, white and rose
wines and took us through the production area and cellars. This winery, in addition to being high tech, is " green". For example, the cellars are lined with cork, to reduce energy needs for temperature control. The final cellar we entered was very dramatic. We were in a huge dark basement, then a light came on in each of the glass contained cellars surrounding us, lighting up the name of the wine in that cellar. We stopped in the vineyards, then returned on the train to the the reception area for tastings, and, of course an opportunity to purchase the products. We were very happy with our choice of tours for the day! We even got back in time for a hotdog and some quality time with Maggie in the sun by the pool. After a little FPA time and in-room sail-away cocktails, we ate in CR, then went for the sixth and last time to the Production Cast show, Great American Song Factory. 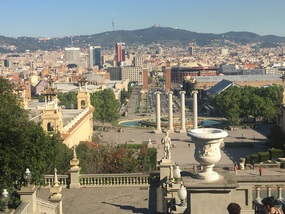 View of Barcelona from 1929 World .Expo site
. At Sea, 60-66.overcast, seas 5-8'.
Our very first lecturer on this journey was an Astrophysicist, talking about the exploration of Pluto. Our last two lecturers are another Astrophysicists and an Oceanographer. We went to both of their first of 7-8 lectures this morning, and we were very impressed with their ability to capture our attention, regarding "Why we Explore Space" and the "Marine Biology of the Mediterranean". The Oceanographer, who is a seasoned world traveler, got hit by a pickpocket in Barcelona yesterday! Everyone had warned us! What was he thinking? Too cold for poolside lingering, so we had lunch in La Veranda. We, no, I, ordered extra strong Bloody Mary's. Well they came as a tall glass filed with vodka, with two ice cubes and a splash of Bloody Mary mix! Delicious! Except, one of us needed another shot of the mix to make it drinkable! This afternoon Jamie conducted a White Elephant Auction to benefit the Crew Social and Activity Fund. This fund supplements what the cruise line provides for the crew to go on tours and have on board parties etc 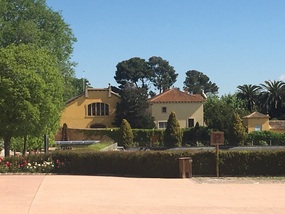 Family residence. Torres Winery
., e.g. to enhance their quality of life on board. The stuff auctioned off was stuff like a special dinner in the galley with the Exec. Chef, or a private dinner for six, with the piano guy serenading, or breakfast in bed for your favorite crew member, served by the Jamie, or be a bartender for an evening, complete with uniform. There were about 30 items like this. He had hoped to raise $10k, which was earmarked to buying bikes for the crew to use when in port, but as money is meaningless to many on board, he raised $32.5k! We bid on a few items, but the auction went quickly over our heads. We dabbled at the Penny Slots, before in-room cocktails, dinner at Ola's, then a bit of Clive before the show. The show was a concert pianist doing an hour long, non-stop around the world in music medley. It was very good!

Day 116. Gibraltar, 60-70, sunny.
It was a gorgeous day, and our morning tour entitled "Gibraltar Delights" was totally delightful! Our tour guide was one of the best we have had 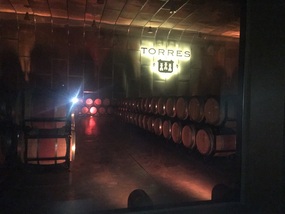 Wine Cellar
. She is British, has lived here and raised her family here for 27 years. She is totally passionate about Gibraltar, and is totally irreverent about Spain, and even a little about USA. She referred to McDonalds as the US Embassy! She was at times, laugh out loud funny. Anyway, no guide could have screwed up this tour. Gibraltar is a solid rock, 3 miles long, 1/2 mile wide and 1500' high. There is a geological explanation of how it got where it is, having to do with continental plates, but the better explanation is that Hercules created this as one of the two pillars of Hercules, to keep sailors from falling off of the edge of the earth. We first drove to the War Memorial, at the Straights of Gibraltar, where we had a photo op of the memorial as well as of Africa, 14 miles away. Next we went to the cable car, where we had a VIP entrance, so, no lines, but we were the first up anyway, so had the whole "Top of the Rock" to our 16 person minibus, for about 45 mins. The charming "Barbary apes", greeted us and entertained us as we enjoyed the spectacular 360 degree view. Back down, we toured the Botanical Gardens, then went to a charming patio of a hotel for drinks and canapés. We did a little more panoramic touring of the city, before returning to the ship. It was such a pretty day, so we lounged in the sun on the pool deck, enjoying another libation. We did have a second tour, a "Dolphin Watch" in the late afternoon. Not that we needed to see dolphins, but we just wanted the harbor view/cruise aspect of it. It was a bit choppy, and we saw maybe 3 dolphin. The most interesting thing was seeing The Rock from the perspective of the bay. Basically, it's backwards of what we all grew up knowing. The "Prudential" rock is actually on the inland side of the ismus, not the ocean/straights side. How weird is that?
Other Entries
-