-
Day 125. At Sea. 68-75. Partly cloudy, occasional showers. Seas from calm to 10-12'.
It's interesting that we have sort of connected with the speakers and entertainers of late 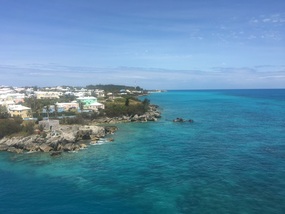 Arriving Bermuda
. Today it was nice enough to have breakfast outside on the fantail. After that we sat upstairs on the fantail for over an hour, chatting with Clive, the piano bar guy. Next, on to two lectures, one on the Marine Biology of the Reefs and the next on Alien Planets. The following lecture by the Astronomer is going to be about what life on an Alien Planet might look like. He claimed, he will explore if they might have Chinese take-out, for example. We noted that as we don't yet have Chinese take-out in Hilton Head, it would really piss us off if they had it in another galaxy! Next on to Jamie's game; the last one of this voyage. That thought made us work (laugh) really hard to take 1st one last time. The Astrophysicist's wife, Shirley, has recently joined our team. We had a two Bloody Mary lunch with George and Diane, the Oceanographer and friend, and Jamie and Dana, by the pool. We had a quiet afternoon, then met Cathy and Richard and Peggy for cocktails, then dinner in CR. We have definitely enjoyed Cathy and Peggy at Jamie's game, but also have been fascinated, hearing about their extensive cruising experiences 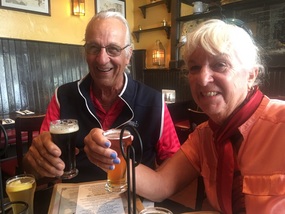 Day 126. Bermuda. 75, partly cloudy with an occasional tropical downpour.
Mostly, it was a beautiful day and a beautiful sail into St. George, arriving at noon. We canceled our scheduled tour, a sailboat tour, with swim/snorkel, cause it just wasn't warm enough for that. Instead, we went out on our own, along with David and Shirley, Astrophysicist lecturer and wife. We shared a cab to Hamilton, then did our requisite visit to the Hog Penny for beer and really great French fries. We spent an hour or so perusing the shops, before boarding the ferry for the Dockyards. Here two mega cruise ships were docked. There are lots of shops, but the major attraction for us was that the America's Cup will be contended here in a week or so, and the contending boats were here and practicing. We did see one boat flying through the water from the ferry, and also got to see Oracle, the American contender, being lifted out of the water. Unfortunately, just as we arrived, so did a tropical downpour, so we all got soaked, but Shirley bought us all ponchos and we were good to go! By the time to leave, the sun was back out and we had a very fabulous high speed ferry ride lasting 45 min. all the way around the north coast from the west most tip to the east most tip of Bermuda, back to St. George. We went to the pool deck and were joined by Astrophysicist duo and Oceanographer duo for a sail away party, complete with Swizzles. The scenery was fantastic, but the Swizzles were just not that great, so we are eagerly anticipating Swizzles by Russ! By now, it was too late to get dressed, etc, so we ate in and crashed.
Other Entries
-