-
Today, Saturday, I slept in until about 8:30. I slept well enough. We had brunch at about 10:00: dark bread, butter, honey, local goat cheese, and two kinds of quiche, accompanied by fruit juice and strong Swiss coffee (excellent). Our conversation continued about many things. About 11:00 I had a counseling session in one of the rooms in the house, and the rest of the Sabbath group arrived about noon. It was good to see everyone again, though we had just seen each other five weeks earlier in Normandy. Usually the times between visits are much longer, so this was a real treat.

About 1:00 we sang some hymns together and I gave a Bible Study/sermon about why the Bible contains prophecies and key threads running through them 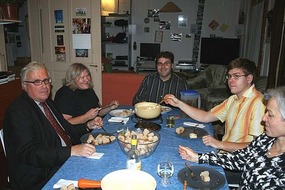 The conversation was varied and interesting: plans for the future of the work of our church organization, the advantages and dangers of the Internet, generational attitudes toward the Internet, changes in the world over the past decades and so on.

Around 5:00, as the sun set, Jean-Marc and Daniel began preparing dinner: a cheese fondue. It was ready about 6:00 and sat down for a delightful dinner. If you've never eaten a cheese fondue, you’ve missed something but the best are in Switzerland because of the excellent and rich cheeses. The conversation turned to the best ingredients of a fondue. This dish is serious business in Switzerland, so opinions are strong about its preparation. People and regions have their preferences about the kinds of cheeses to use 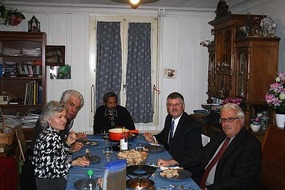 Enjoying the fondue 2
description
. A fondue is always a mix of at least two cheeses and sometimes more. Add some white wine, garlic, eau de vie, pepper and other ingredients in just the right proportions to achieve the sought-after taste. Melt (fondre in French, which is where the word fondue originates) it all together in a pot over a small flame to keep it hot. Then stick a small piece of thick bread on a long fork and swirl it around in the pot. When the bread is pulled out it is covered in cheese. This can be popped in the mouth right away, taking care not to get the fork in one’s mouth. It is delicious! Accompany it will chilled white wine, dry but not too dry (in Switzerland the Fendant wine is most often served with fondue) and it’s very convivial. Conversation flows naturally.

Our conversation was fascinating and varied: the best fondue mixes, the history of Switzerland, and jokes about cantons. Appenzell in the north-east of Switzerland, for example, is home to a smaller people, so joke about them often center in their diminutive height. For example “Why are they eliminating sidewalks in Appenzell? Because too many people were committing suicide by jumping off the curbs!” The people of the canton of Fribourg are teased about not being very clean. One Fribourgeois decided to save space by having his goat live in the house with him. His neighbor asks him “What about the smell?” to which the farmer response “The goat got used to it!” The people of the canton of Geneva are teased about having large elastic smiles – no joke was given in support.

Other topics included healthcare reform not only in the US but in Switzerland too, where the cost of government mandated insurance keeps rising to the point of impossibility for some people. This led to a discussion on the respective strong and weak points of capitalism and socialized services, and centralized medical insurance, the world economy and where the current crisis started, Bernard Madoff, and banking secrecy. We talked of our personal stories as Christians and the development of our church association in Switzerland. We discussed the merits of the Swiss soldier, the history of the Swiss army and mercenaries, how closely the cantons of Geneva and Vaux are ethnically connected to France. How Napoleon saved Geneva from Berne but then annexed it. We went on to the adventures of traveling in Africa, and corruption around the world. Some subjects were closer to home: the perils of driving in the snow during the Swiss winter, the relative merits of having one’s own fruit schnapps distilled, and the joys of gardening on which all my friends here agreed.

It was a wonderful meal and an exceptional evening. The Giauques having a two hour drive before them, left about 9:00 and that was the signal for others to begin leaving too. I will head to bed early again tonight.
Other Entries
-

Nice to see the pictures of friends we met at the Feast in France a few years ago. The conversations must have been wonderful, and your food comments...well, I could only imagine the satisfaction of combining delicious food and stimulating conversation.