-
We had planned to make an expedition to Geneva today and visit one of the museums there that I hadn't yet seen, probably the Art and History Museum. But before going, this morning I intended to continue the discussion about baptism with Daniel. We began these discussions more than a year ago, and had met several times, but the time between my visits to Switzerland meant we couldn’t advance too quickly. So we wanted to take this opportunity. We talked for several more hours, going through various scriptures about believing the gospel, faith in God in a more general sense, the commitment represented by baptism, and the promises God gives in His word. By the end I was satisfied that he understood the commitment and covenant, and told him I would baptize him if he so wished. He did. It was about 2:00 pm by this time so we discussed with the family where we could have the ceremony. Finally the lake in the Joux Valley was suggested, about an hour’s drive up in the Jura Mountains to the north and west of Trélex.

(The Jura Mountains are the place where geologists determined there had been a previously unknown historical period which they named Jurassic (supposed to be from about 200,000,000 to about 140,000,000 years ago if they got that right); the period paleontologist feel was "the age of the reptiles." So in a sense, any public land in this region is a “Jurassic Park.”)

It would be cold this time of year and the lake bottom is rocky, so we prepared extra towels and brought water shoes. Mr. Mrs. Vernaud and older brother Jean-Marc went in one car, and I rode with Daniel in his car. 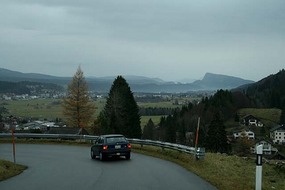 The drive to the Lac de Joux


The drive through the Mountains was very pleasant. It was a gray day, and very overcast, but the scenery was beautiful. Light rain fell as we drove through pine forests heading up to the summit ridge. Near the top we passed through what are called Alpage meadows, where cows spend the warmer summer months. Before the Swiss winter they are driven back down to less chilly climes where the lower meadows have had time to flourish without being grazed. The Alpage meadows are surrounded by hand-built stone fences that have been in place for a very long time, it reminded me of scenes from Lord of the Rings.

Snow was visible in patches in the meadows. It was clear the lake, though lower down, would be cold. We finally arrived on the north-west shore of the lake, to a less-developed area that didn’t have many hiking trails. We hoped to find a discreet place for the ceremony and the Swiss love to hike; snow, rain, whatever the conditions you’ll find hikers out. We parked at the top of a steep hill and took a hiking train down to the waters edge, about a fifteen minute descent.

On the shore, I asked a blessing on the ceremony, and we undressed down to our swimwear and T-shirts. 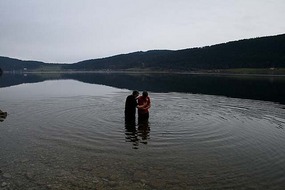 The baptism
The rain had stopped momentarily and the sun brightened the sky, though it didn’t fully pierce the clouds. It was an idyllic and calm spot, if chilly, a beautiful and memorable place to officially start a Christian life. After the baptism, we came back out and dried off quickly. We had the laying-on-of-hands part of the ceremony and then all congratulated Daniel on his new start in life. 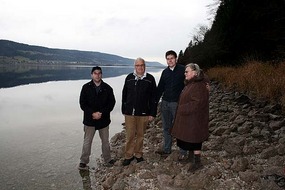 Daniel (2nd from r.) with parents & brother
We changed out of our wet clothes in the woods at the waters edge and hiked back up the steep hill side to the cars.

The drive back to Trélex was I think even more beautiful. The sun was setting and lights coming on in the mountains. We drove back along the chemin des montagnes, the mountain trail that parallels the crest of the Jura and goes through miles of Alpage meadows. As we descended toward Trélex we stopped for a moment at a point where we could see where Lake Geneva was covered in clouds down below, with the snow-topped Alps on the other side. 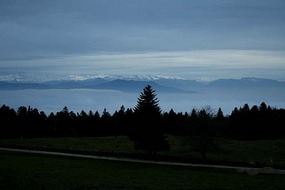 View down on Lake Geneva and the Alps
It was for me a beautifully exotic view and very peaceful.

We continued talking back at the Vernauds’ house, while Jean-Marc prepared chicken curry for dinner. It was delicious and copious, just what we wanted after a hike and a dip in a cold mountain lake. We watched a bit of a football game on television. Switzerland was playing Nigeria in Abuja in the final of the world cup of 16 years and younger players. The young players were impressive, and having had the experience myself, I could imagine what it must have been like for the young Swiss to arrive for the first time in Nigeria in West Africa.

It was a very good day today. Tomorrow if all goes as planned I’ll fly back to Paris and pick up a car to continue my visits.
Other Entries
-

I'm very happy for Daniel, it looks like he had it tougher than I did!

We're thankful for Daniel and his family. The photos are lovely, especially the view of Lake Geneva and the Alps. Daniel's baptism must have been quite a bracing occasion!