Geneva to Paris to Sedan to Bastogne

-
Mr. Mrs. Vernaud and Daniel joined me for breakfast at 6:30 am. I had still suffered the effects of jet-lag during the night, so the strong Swiss coffee was very welcome! After our good-byes, Mr. Vernaud drove me to the Nyon train station and bought me a ticket to Geneva. I hopped on a train just before it pulled out and ended up standing in the entry area with my luggage since the train was full of morning commuters. Also in the entry were three American kids, one teen and two of primary school age. They were going in to Geneva for school. I could tell from their accents and manner of speech that they were American, and I eavesdropped to see what I could learn about them. Not much, as it turned out, they were siblings and squabbled and bothered each other about not much of anything.

Switzerland actually has a large expatriate population, including quite a few celebrities who seem to mostly live around Lake Geneva Bastogne just after the Battle of the Bulge
. Taxes are low on the rich, and crime is low, which explains part of it, and of course it's incredibly beautiful. Michael Schumacher, the retired Formula 1 driver has an estate on the lake just up from Nyon in Gland, and his wife has a large horse stable up the hillside that we passed last evening not far from Trélex. Phil Collins lives in nearby Féchy (his third wife was Swiss, they’ve since separated), Shania Twain lives in Corseaux on Lake Geneva, Nana Mouskouri lives in Geneva. Other celebrities live in other parts of Switzerland. Roger Moore lives in the Valais canton, as does Frida Lyngstad, the singer from Abba (she’s the dark haired one). Tina Turner lives on the Zurich gold coast. When I write my block-busting pastoral travel memoires, I will consider moving to Switzerland too to avoid paying taxes on all the royalties….

Back to reality. I arrived at the airport with plenty of time to spare. There were no French agents at the immigration desk so I just walked down a hall into the French sector of the airport, thereby discretely crossing an international border. From then on I was in France. The airport really is located right on the border, and there are separate French and Swiss zones. After checking in, I waited in the Air France lounge and read Swiss and French newspapers as well as an interesting book my father suggested to me called Seven Men Who Rule the World from the Grave, all the while sipping cappuccino to make sure my eyes stayed open The flight to Paris left and arrived on time. The sky was overcast most of the way so there wasn’t much to see, and the plane was very full in any event, so I couldn’t see much from my aisle seat. Since I had officially left from France, there were no formalities on arrival.

I picked up my rental car, a Renault Clio (diesel), which is much larger than the early models used to be. I left immediately for the Sedan area about 3 ½ hours to the north-east, stopping briefly for lunch on the roadside. I reached Mr. Gillissen’s home, not far into Belgium, about 4:00 pm, just as he arrived home. He is being tested now for cancer of the esophagus, and has a number of other difficult situations he’s juggling too, like having to recycle into a new line of work and look for a new position. We spent about two hours together. He explained his various situations, and I tried to offer encouragement and what counsel I could. He will keep me informed when he receives the results 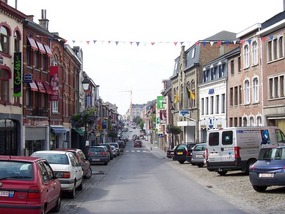 Bastogne Today
description
. "The waiting is the hardest part" he told me.

As I left Mr. Gillissen, to follow up on an e-mail I had sent about a week earlier, I called Mr. François who lives up near Liège. I hoped to stop and see him and his wife tomorrow morning, but he told me he was having x-rays done (he has been diagnosed with cancer). He said he was sorry but we wouldn’t be able to meet this time, but he thanked me for trying. He sounded very positive. He’s in no pain, and told me he’s at peace with whatever happens. He was a paratrooper in his youth and had a very hardy, can-do approach to life. He’s now about 80 years of age. He told me with a bit of a laugh in his voice, that “if it comes to that, I feel good enough to die.” They’ll receive a visit again in March, and then probably in July. Mr. François is already planning his magic act for the talent show at the next Feast of Tabernacles. He told me it’s all prepared already.

By this time the sun was setting, and I was pretty tired, so I drove to Bastogne, and checked in to a hotel I like to use there, the Melba. It’s not expensive, right in the center of town, and has free wifi. Bastogne, of course, is where American troops, surrounded by the last-gasp German Arden Offensive (the Battle of the Bulge) around Christmas 1944, refused to surrender. When a German officer was sent in blindfolded to ask the Americans to surrender, General Anthony McAuliffe replied “Nuts!” which rather confused the German. He had to ask if that was a positive or negative reply, and was assured it was definitely negative. And the Americans held out in the coldest winter weather on record, until relieved. It is an inspiring story of valor and perseverance. I never tire of walking around Bastogne and thinking about what happened there.

I had a pizza for dinner and came back to my room fairly early to get some work done on my laptop. Tomorrow will be another busy day.
Other Entries
-