From Bastogne to the English Channel

-
This morning I worked in my room until mid-morning when it was time to leave for the 2 ½ hour drive to the home of Mr. Mrs. Gorisse who live south of Maubeuge, which is just south of the Belgian border at Mons.

It was a cloudy day with frequent rain showers, but nothing that slowed traffic 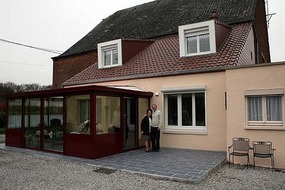 We spent a very pleasant 2 ½ hours together over a delicious lunch: tapenade and mousse of salmon as an appetizer, macedoine of vegetables with smoked salmon as the first course, steak, braised potatoes and creamed mushrooms for the main course, a selection of cheeses including a wonderful fresh goat cheese, followed by a cherry tart for dessert. Two wines accompanied the meal, though we were careful to use them moderately.

We caught up on all the news, the new construction on the house, work situations, the situation in the Church both local and international, and we discussed national and family history. One of Mr. Gorisse's ancestors was a General in Napoleon’s army. And Mrs. Gorisse’s paternal grandfather died at Verdun in WW1 and is buried in the massive French military cemetery at the ossuary which I have visited many times including just recently with the group tour I guided in September. I shared what I know about our family origins: the first Meeker arriving in the New World in 1648, participants in the War of Independence on both my father and mother’s sides of the family and so on.

I was surprised to realize that it had been a year and half or so since my last visit. My travels are so frequent and I’m almost constantly on the go, yet there is so much to do that in spite of my best efforts my visits to particular areas or people are few and far between. At 2:30 we said goodbye, so that Mr. Gorisse could go back to work at the music school he directs. He would have classes until 9:00 that night. I started south toward Paris, but made a detour toward the coast that I have planned for my day tomorrow which will be my day off on this trip. I intend to visit a few sites of historical significance from the 100 years war, which occurred from the mid 1300s to the mid 1400s. So I drove to a small town near Abbeville on the Channel coast. I will spend the night here and tomorrow, if all goes as planned visit the battlefields of Crécy and Agincourt before going back to Paris for my flight to Bordeaux for the balance of this trip.

For dinner I drove to Sainte Valérie, where the Somme River reached the Atlantic. I found a little bar pizzeria, and ordered their special "Christmas" pizza (in mid-November!). I chose that because it made with magret de canard and foie gras, two specialties I enjoy very much. As I was eating I couldn’t help overhearing in the bar (which was only about 6 feet from me) two men who were having a rather intellectual conversation about world event as they sipped rosé wine. One of them wore a tweed jacket and had a pipe in his mouth, and held forth as an expert on the United States and what was happening there.

He obviously espoused Keynesian economics as most Europeans do, and our lack of doing so was at fault in our melt-down he explained. The sub-prime disaster was caused, he explained, by crafty, greedy bankers who, with dazzling promises, forced poor ignorant people to buy houses they couldn’t afford, against their will. Then they quickly sold the mortgages to other bankers to make a fast profit. Those bankers resold them again at a profit and so it went. He went on and on in this vein. I bit my tongue to keep from intervening and introducing them to Barney Frank, Fanny Mae and Freddy Mac. But it was their conversation and their world.

I had to admit that not too many of my fellow countrymen would have even such an imperfect idea of what was going on in any other country of the world, so I had to grant them that at least.

Finally they moved on to the subject of California wines, of which the expert explained, we had almost none of the white variety, only red. Some of them are pretty good; he went on, (although they’re really just varieties of French wines…).

Then they moved closer to home and discussed the relative work ethic of Corsicans (often reputed to be lazy), people from the south of France and Parisians. A third fellow who had apparently been at the bar for quite a while, judging from his speech, broke in to defend the southerners (he didn’t think much of Parisians), and the conversation became quite animated. It was a fascinating little window into French life and thought. I find situations like this quite absorbing.

And the pizza was excellent.
Other Entries
-