-
After another very nice lunch with Mr. Mrs. Audoin, we drove to the hotel where we would have services and the wedding. We had a brief rehearsal to make sure all the details were covered.

Several people drove in from other areas, Normandy and Poitiers, so we had a larger group than usual in Bordeaux 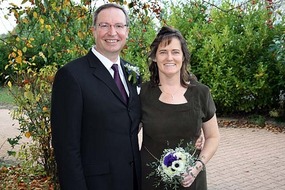 Hervé and Helen Dubois
. At 2:30 we had our Sabbath service. I gave a brief news update on things that had happened since the Feast of Tabernacles and then a sermon on the deep significance of marriage. We finished in time to get everything ready for the wedding. We had a scheduled beginning time of 4:10 pm, because Helen's congregation in Grand Rapids, Michigan wanted to listen to the ceremony over the phone. The wedding had originally been planned to take place in Michigan, but due to the US State Departments refusal of an engagement visa, the venue was changed to France. This was a disappointment to Helen’s friends in Michigan, but an unexpected joy for Hervé’s friends in France. There is a saying in French that translates roughly as "the unhappiness of some makes for the happiness of others." So the congregation in Michigan held services in such a way that they wedding could be heard during the announcement period of services over their speaker system. A good use of modern technology.

The ceremony was held in both French and English, a paragraph in the first, followed by the translation in the second. So both of them said first “oui” and then “I do”: doubly married! That’s similar to the way my wife and I were married.

After the ceremony finished, we took some photos in doors and out and then had cake and Moët et Chandon while we celebrated with the newlyweds. Finally about 6:30 things came to an end. Hervé and Helen left for their honeymoon and most of the rest of us were invited to the Bernals’ home for a lasagna dinner. After dinner, Daniel and Cindy Harper showed slides of their recent trip to Thailand which they had very much enjoyed. It was another very pleasant occasion, and a fine end to a wonderful day.
Other Entries
-