Another trip through the French African zone started on Tuesday. It started inauspiciously with flight delays and rebookings. The last few weeks have been even busier that a pre-trip period usually is. My online class on the books of Daniel and Revelation is underway, so I had to be prepared in advance for my three week absence. This meant recording two classes a week instead of one for the last three weeks. And while I was doing that, I was also teaching the classes live at Foundation Institute, so I was engaged in a great deal of teaching and recording. 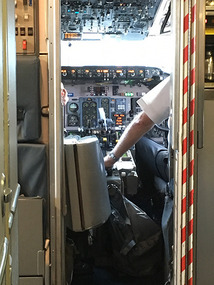 A surprisingly open cockpit door
Finally Tuesday D-Day arrived, and I prepared to head to the airport for a 4:00 pm departure. Then I received an e-mail that my flight would not depart until 6:00 which meant I would miss my Atlanta connection to Paris. I phoned in to look at options. After rebooking twice, I ended up on a flight leaving at 5:15 connecting to an 11:00 pm flight to Paris, arriving at 2:00 pm. I slept about two hours on the seven-hour flight. I waited in the lounge and snacked on French cheese and a glass of Burgundy, before heading to my next flight. 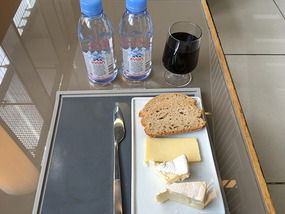 A snack in the Air France lounge in Paris
The Paris-Dakar flight was also slightly delayed, finally leaving at 4:30 Paris time. This last flight south lasted five hours, and with the time change, we arrived about 8:30 pm. I had one of the feared inside seats, between two people, so conditions were rather cramped, especially on Air France which has an inch or two less space per person that most other Western Airlines. French people tend to be smaller and trimmer, so the Airline calculates accordingly.

I was surprised on landing to see that the airport was very dark. Usually they're brightly lit, but as I watched the forward mounted camera feed on the screen, this one wasn’t easily visible from the sky. Even on the ground I found it very dim, surprisingly so. But formalities went relatively quickly. The lines at immigration were long but moved well. No visa is required for entry into Senegal. The agent just scanned my passport and the index fingers of both hands, ask me where I was staying and wished me well. 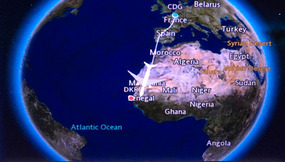 Our flight path to Senegal
I pulled my suitcase to the door and asked the policeman how far the Ibis hotel was. I wanted to know about how much a taxi fare should be. He said 20,000 bar car. I was shocked, 20,000 CFA I asked? This would be $35, quite a lot here. He said "oh no about 3500 CFA ($7). I thought through my confusion and realized he must have said not twenty thousand (vingt mille), but twenty minutes (vingt minutes). OK, the accent's a little different here. In the end the knowledge wasn’t urgent because there was a woman outside the terminal holding an Ibis sign.

We’re on the verge of the Sahara here, but the night was cool and lovely, thought I could sense the dust in the air as is often the case around the Sahara. When we lived in Provence in France, we would sometimes find our car coated in a fine film of dust which had been blown all the way across the Mediterranean from the Sahara. It’s a big desert.

I waited with a tall Nordic fellow while the driver made sure there were no other passengers and then we drove, yes, 20 minutes to the Ibis. I was told when I tried to check in that I was being upgraded to the Novotel next door. That’s a three-star instead of a two-star hotel. I was not told why, but it was clear they were having some sort of problem at the Ibis. It was10:00 pm by this time. I dropped my bags, put my laptop in the room safe and walked down for a sandwich, since the meal on the plane had been a late lunch for me.

It took almost an hour to get my chicken sandwich. The waiter apologized and offered me a complimentary desert to atone for the wait.

Now I’ll turn in and should sleep well, I’ve been going on two hours’ sleep for about 30 hours now.

Glad you finally got to your destination! So interesting to hear the details of this first leg of your long trip. Praying for God's protection on your travels.

Glad to hear you had a safe, although changeable, trip. Interesting that dust from the Sahara blows into Provence. You will be in our prayers for a productive and encouraging trip.

Hello Mr. Meeker, I hope you sleep well and wake up refreshed from your long flights. I will be praying for your safety and that your trip blesses many people's lives.

Mr. Meeker, May your journey be safe and productive, and may the upgrades flow to you on this trip. Our prayers will be with you.

Keeping you in our thoughts and prayers for this journey. Thank you for your huge heart of service to our French-speaking African brethren.

Hi Mr. Meeker,
We are thankful that you arrived safely. May God richly bless you on this trip and throughout all the Holy Days. Our prayers are with you and all of our brethren in these areas. Thank you for serving all of the brethren, not only in the French-speaking areas but here in the US. We are enjoying your FI classes.
Judy Ferenchiak

We are praying for God's blessings on this trip for both you and those you visit! Please pass our greetings to our brethren in French-speaking Africa and let them know we are thinking of and praying for them.

I'm sure I will enjoy your blogs as usual. It's nice to hear some details about your trip and about the brethren's lives in those areas. Praying that all goes well.

Tuesday was a rather stormy day all over. It is good you were able to leave when you did. Hope you have a blessed trip and Holy Days.

May God bless you for your many hours spent teaching the brethren in these Third World Countries. Those of us here in the U.S. can little imagine how difficult the travel must be. I thank you.