A day around Dakar

-
This morning, I woke earlier than I'd hoped. I had slept seven hours, but felt rested and fully awake, so I rose to start the day. I caught up on some office work, enjoyed the fresh tropical fruit offered for breakfast (the mango was particularly good), and spent an hour changing rooms from the Novotel to the Ibis next door. Every necessary action seems to take at least an hour in these parts.

The goal of my stop here in Dakar was to visit a man who is very interested in the Bible and our work. He’s listening to sermons on our member website and is quite enthusiastic. Unfortunately after I had made the arrangements to stop here, he was transferred by his employer to Burkina Faso. It would have cost more to change flights and cancel hotel bookings than for me just to spend the day here, so that’s what I decided to do. SO aside from some office work, I had a free day in Dakar

At 10:00, finally squared away, I walked down to the ferry port, to catch the boat out to Gorée Island a few miles off the coast. It has a long history of habitation by Europeans as well as Africans. It was one of the first European settlements in sub-Saharan Africa, settled by the Portuguese in the mid-1400s. It’s most known now for its memorial to the slave trade, called the "Slave House". It turns out that house probably had little to do with the slave trade. Historians have researched and archaeologists have dug looking for signs of masses of slaves transiting through the island, but they have come up empty. Some now believe it had little to do with the slave trade at, most of the sales would have been elsewhere.

Then how did Gorée become known for this alternative history? Due to the very good story telling of a man who imagined that what is known today as the Slave House, must have been a major transit point for the transatlantic slave trade. His descriptions of the suffering and inhumanity, and the door of no return were so dramatic that people assumed they must have been based on fact. Authorities are backing off those claims now, but the house is so firmly rooted in imaginations, and the story is so good, that people still flock to it. We’re in a post-truth world. 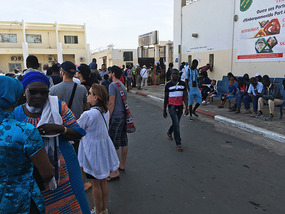 Waiting in line to buy a ticket
There really are places known to have been major transit points for slaves, but they’re mostly elsewhere in Senegal and in Ghana and Benin. There really are doors of no return that still exist. I’ve seen them and visited the castles, such as Elmina and Cape Coast where slaves were truly transported in large numbers. Those have substantial historic support. But Gorée has captured the imagination, and it’s become a sort of pilgrimage point for the African diaspora as it’s sometimes called, among others people. Barak Obama visited a few years back.

I waited in line to by my ticket which cost nine dollars round trip, and then waited an hour in the departure lounge for the next available boat. The ocean was calm on the way out to the island which can be easily seen from the mainland coast. 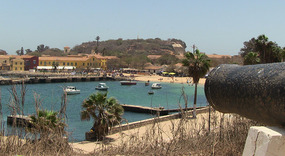 The port on Gorée Island
There was a school group from a bilingual school among the passengers. These 12 or 13 year-olds switched easily between the Wolof, French and English, the latter with striking American accents. Their black American teachers were accompanying them; I heard them chatting. It’s amazing what children can learn if they’re taught well. I was a little ashamed to think of the miseducation many of our children receive in American public schools. Then again these were no doubt the children of wealthy Senegalese who can afford to send them to a private school with Western teachers.

There were several black American families making the pilgrimage out to island, and I heard a smattering of other languages, among them Chinese, and something Slavic I didn’t quite recognize, not Russian but Slav. 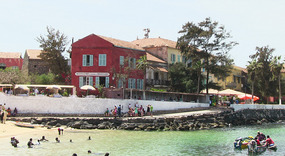 Around the port on Gorée Island
We disembarked on the jetty and made our way to the charming waterfront. Old stone buildings were painted in Mediterranean colors, burnt orange, antique gold, and the like. Long narrow fishing boats bobbed at anchor. Children splashed in the clear water, screaming with excitement, and offering to dive for coins if tourists would throw any. It was noon by this time, and I was hungry, so after a quick look around to try to find a likely restaurant I settled on one on the sandy waterfront and ordered braised sea bream and a local beer named gazelle, possibly because it’s very light indeed. 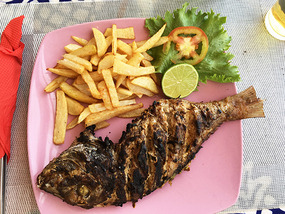 Braised sea bream
I sipped my beer and watched the tourists and the locals amble back and forth. When the bream arrived, I was pleasantly surprised to find it was the best I’d ever tasted, and I’ve eaten quite a lot in countries like France, Greece, islands in the Caribbean and other countries in Africa. It had a wonderful smoked taste, and was perfectly done. And it cost six dollars US. I might think about buying a second home here…. France Gall, a famous French pop singer has one on the island. She must like sea bream too. 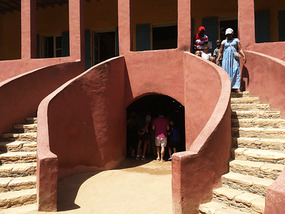 The "Slave House"
After lunch I walked around the small island. On the north end there is a fortress which now serves as a small museum showcasing what is known about the history of the area. I walked to the House of Slaves. It cost less than a dollar to enter, so I did for a quick look around. It struck me how small the place was to be, as claimed, a major trade center. Signs are set up labeling some rooms cells for male slaves and others for females, but none of that is based on any historical evidence.

Still all in all, I was very happy to have come to the island. 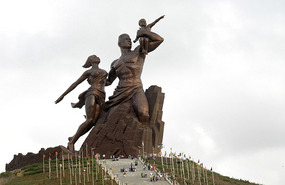 African Renaissance Monument (wiki photo)
Around 4:00 I caught the boat back to the mainland port and immediately negotiated a fare with a taxi driver to take me to the lighthouse, which is 20 or 30 minutes away near the airport. It is located on top of one of two hills (the only ones on the Dakar peninsula) christened by the French colonials les mamelles (the teats – no comment…). We stopped at the first mamelle so I could see the African Renaissance monument : a rather (I thought) soviet-looking statue of a man and a woman holding a child and looking confidently forward. I read that there have been complaints that the woman’s skirt is to short, so the creators are tailoring her skirt to a longer length.

Then we drove over to the other hill where the lighthouse is located. The driver stopped at the bottom and said he was now allowed to drive up, "big fines if I do" he said. I had read there were great views of the tip of the peninsula and of Dakar from the top, so I hiked my day pack up to the top.

The views all around were worth the ascent. I didn’t pay the fee for the lighthouse tour, just took in the views. I especially enjoyed looking at the airport from above. I knew from my history that this was a vital link in the US air-supply of the war in North Africa. The shortest route across the Atlantic is from Brazil to this coastal area, so lots of freight and many personnel were flown across this route. 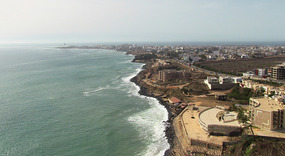 From lighthouse west to end of peninsula
Honestly the airport itself is pretty dingy and cramped, but the history made it interesting to me. They’re building a new and larger airport on the other side of Dakar now. It’s several years overdue, but it will probably get down. I will always be able to say I flew into the old airport, and the old terminal, which I have some fun saying about a few airports, like Hong Kong where the planes used to scrape the skyscrapers on final approach in the old Kai Tak airport. If you are interested, here’s what that was like on my first transits through Hong Kong https://www.youtube.com/watch?v=fQSKrraDWPs. People used to come from afar to watch the pilots at work.

As I was walking back down the hill I had to move over because a taxi drove around me carrying passengers! On his way back down, he stopped his now empty cab and asked me to get in. I told him I had a taxi waiting at the bottom. He insisted; it was a kind gesture which I accepted. At the bottom I gave him 200 francs (35 cents) and he was surprised and very appreciative. “Really?” he asked. That must not happen much. When he was me get out of the taxi, my driver was rather miffed. “He took a big risk going up there” he said.

From the hills, we drove back to the Ibis. It doesn’t have a restaurant, so I walked next door to the Novotel where an impressive local singer was belting out songs in Wolof, French and English. The buffet line didn’t open until 7:30 pm, at which time I loaded up on salads of raw vegetables. I won’t always be able to safely eat those on this trip (they have to be washed, and the water used can really make one ill), so I try to take advantages of such opportunities.

Tomorrow will be a travel day which will start very early.
Other Entries
-

Thank you so much for taking us along with you this trip :-) You make things come alive with the way you write!!!! You should compile all of your pics and adventures into a book :-) Could become a best seller!!!! Who knows?? :-) Have a safe and worthwhile journey :-) Prayers for your safety :-)

Thanks for the interesting comments and photos. What a view from the top, even if you had to hike to see it. Interesting that the Slave House has become a reality with no historical substance--but it is an example of the post-truth world as you mentioned.