Travel from Senegal to Cote d'Ivoire

-
My morning started at 4:30 when my alarm went off. There hadn't been any towels in my room when I first entered. I called the desk and was assured they would be delivered. When I returned from the Gorée expedition there still weren’t any in the room. I called again, and was again assured they’d arrive soon. I fell asleep while waiting for them. So this morning: no shower. This is not good in the tropics where one often perspires heavily. Applying liberal quantities of deodorant and got myself and my bags ready for the 5:00 shuttle to the airport. Formalities went smoothly, so quickly found myself in the departure lounge. A large group of European girls, some with cornrows on their heads were talking sleepily. I was curious where they were going from Dakar. They boarded a flight to Casablanca in Morocco, a very modern city, with no Rick’s Café Americain to be found.

We boarded the plane while it was still dark for the flight to Abidjan, which would proceed afterward to Lomé. The flight was not full, so most passengers had an empty seat next to them, a little mercy no longer to be taken for granted.

We were served an omelet for breakfast, and I couldn’t figure out what was inside. It didn’t taste or look like meat of any kind, and it didn’t seem like cheese either. Some sort of dough was the filling. It was insipid but filling. I didn’t ask for the recipe.

The flight took two-and-a half hours to cover the 1120 miles. Africa is a big continent. As the first off the plane, I was also the first at the health desk to show my Yellow Fever card, before moving on the immigration where my index fingers were scanned. My suitcase showed up fairly quickly too, things were lined up nicely this morning.

At the Ibis counter the attendant told me that since the shuttle had just left, the next would leave for an hour. Walking outside, I was immediately struck by the heat. In Dakar temperatures had been in the low 80s F. Here it was in the 90s. That makes a big difference.

I negotiated a fare with a waiting taxi; a rolling wreck like most of them are. Off we clattered and shuddered, with windows down to try to catch some air, toward the heart of Abidjan. We hit a traffic jam soon enough, and decided to take a parallel street. The driver explained that the country’s president had just taken a flight out of the country. Police kept the road to the airport clear for him, and then when his motorcade passed, they simply left. Chaos ensued as every driver tried to get in front of the massive herd coming to life. Even with our end-run, we were stuck in traffic for more than half an hour. I soaked my shirt through for the first of what will be many times on this trip. At one point we were stuck next to a white UN vehicle with the UN Development Program. On its doors it had stickers encouraging people to lay down their arms. Over an AK-47 and a pistol crossed off by an x, the sign states: for your security, lay down your arm. 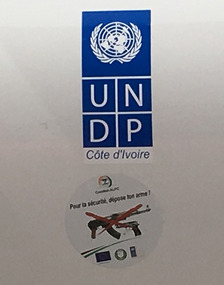 For your safety, lay down your arm!
The trip that takes 20 minutes without traffic took over an hour. We finally arrived at 11:00. Security precautions are continually being ramped up at the Ibis and other hotels around the city. There were already heavy concrete obstacles and a cage around the entrance to prevent car bombs from getting very close (but the street is still very close). But since last year’s Al-Qaeda attack at Grand Bassam, just outside of Abidjan, more security is being added. The attacks occurred in several beach hotels, places I have walked by several times over the years. It’s striking when an event like that occurs in a place one has been and found completely unexceptional. I’ve had that happen in several places, not close calls by any means, but just in places I’ve stayed or know.

In any event, the Ibis now has a metal detector and a scanner just outside and inside the front door. I checked in, and smiled at the staff who recognized me. I arrived in my room hoping for the shower I had missed earlier in the morning, but found that this room wasn’t really ready. The bed had been stripped but not made and it didn’t have any towels either….

Soon enough the maid arrived, made the bed and left towels on her way out. I was about to hit the shower when the phone rang. Paul Tia was in the lobby. I went down so we could greet each other and do what planning was necessary. He told me everyone is doing well in Côte d’Ivoire. We discussed planning for tomorrow, and for our expedition up to Man starting Sunday. I gave him some money for his going-and-coming expenses; we agreed to meet tomorrow morning at 8:00 for the drive out to La Mé for our service. He then left and I was able to have my shower. 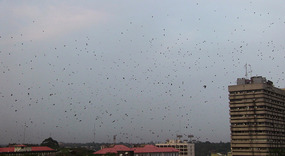 Oh bats!
All afternoon was spent on office work: a member letter to write, the translation of Jim Franks member letter to proofread, both to be sent and posted, in addition to an article to post to the French LifeHopeAndTruth page, and so on. There is always a great deal with which to stay current even when I’m traveling. Before having good Internet access in Africa, that work pretty much stopped when I travelled, now it doesn’t which is both a blessing and a bane.

At dusk as every night in central Abidjan, the sky filled with bats which live in the trees of the city. Even after all these years, I almost always stop to watch the jerky, aerial ballet.

I will make an early night of it, hope to catch up on some sleep and be ready for a full day tomorrow.
Other Entries
-

Wishing you a meaningful, peaceful Passover and Night to be Observed. We still treasure the one we shared in Rwanda. Love and prayers.

We are glad you're situated and will pray about a peaceful rewarding spring Holy Days. It must be an amazing experience to see the bats swoop out of the trees for their nightly insect work!

Wow the chnge in temperature with the high humidity .....that's a real drain on the body. What a relief to have the shower . Pray for God 's blessing for you and the brethern.