A Day of Rest in La Mé

-
This morning I had a hearty breakfast, since I knew I would only eat lightly at lunch. Paul and Kramoko arrived at 08:00 as requested. We started out in the Peugeot sedan which had barely functional air conditioning. As usual the rental cost for the car and driver did not include gas, so we stopped and put in a few gallons; about $15 worth. Traffic was thick in Abidjan, in spite of it being a Saturday, so it took us more than an hour to reach La Mé. It was already uncomfortably hot by the time we started our service about 09:45. There were 12 of us present for the service, including several who had traveled from Abidjan. Before the service opened I had already soaked through my shirt. It's uncomfortable getting to that point, but once one is completely wet, it ceases to be so noticeable.

We sang hymns, and had our opening prayer. I gave a few announcements, and then without transition the sermon, on the topic of how to take the Passover in a worthy manner. After the service the ladies served us a meal: chicken, fish, rice, atiéké (fermented cassava grains) sauce, and a variety of soft drinks, and of course French baguette. This was a feast. I ate lightly as planned, it’s safer for me that way in spite of everyone’s best efforts. It’s quite unpleasant to have to travel around and work in the tropics with a stomach bug, something I learned first-hand on one of my early trips to this continent. 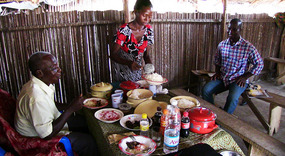 lunch!
They had a question: what exactly was fellowship? Many churches in Africa interpret fellowship (in French fraternization) as simply shaking hands. So I’ve seen many congregations simply line up after a service, shake everyone’s hand, and then go home. I explained that shaking hands was fine, but that fellowship includes conversation, explaining significant experiences we’ve had during the week, encouraging one another, and discussion of what we have in common in our faith. I explained that in our congregations, people often come to the service a half an hour or more early and stay an hour or more after the service to fellowship with each other. This is not to say that this group had not done this before, they had, but putting a name on the practice gave it new relevance.

They also ask me about air travel, which seems to intrigue this little congregation in particular. I told them about the longest flights I’ve taken, one of which was from Johannesburg to Atlanta, one of the longest non-stops in the world. I explained that that route used to require a refueling stop in Dakar, but no longer. I explained some of the logistics. If there are 200 passengers on a flight, this requires a minimum of 400 meals, plus enough bottles of drinking water, and toilets that will function for the whole trip. This was a sort of science fiction exercise in imagination.

They asked for more, so I told them about an air show I’d seen at Edward’s Airforce base in California, where they had a space shuttle on display, and about a demonstration of Special Forces rappelling out of helicopters. I told them about seeing a fighter plane go vertical on afterburner. I explained how I had seen an SR-71 Blackbird (now retired but still the fastest air-breathing plane in history), that could fly as high as 85,000 ft (26 000 meters) at speeds of Mach 3.2, that’s over 2000 mph (3500 kph)!, or in other terms, round trip from the west coast of the US to the east in just over two hours; round trip! That led to a discussion of the size of the USA, how flying from LA to New York takes about as much time and flying from New York to London. I talked about how long it takes to drive across the country and how large some states, like Texas, are (yes, I’ve lived in Texas long enough to start talking about that…).

They asked about farming in the US, so I explained about the massive wheat farms in the Midwest, about how one can drive for a whole day on straight flat roads through fields full of wheat and corn. Wheat flour is expensive in Cote d’Ivoire because it must be imported; the climate here is not conducive to its cultivation. But the French baguette is so much a part of their culture that people pay. 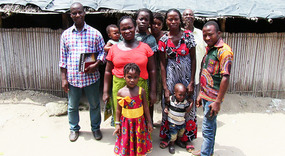 The little group in La Mé
I asked them about the educational system in Cote d’Ivoire and they told me how little or how much formal education they had, and how hard it had been for them to learn French in school. Paul mentioned that they were forbidden to speak Yacuba in his Catholic school, only French was allowed. The teachers had a pair of cow horns on a rope. If a student spoke in Yacuba, the teacher would shout "symbol" and suspend the heavy horns around the student’s neck during recess. He would have to wear this uncomfortable symbol of his infraction, until he could catch another student speaking in Yacuba, at which time he could shout symbol! and pass the horns on to the next unfortunate victim.

They asked about my education, and when I had learned French, so I told them about American high schools and Ambassador College, and the degrees I had completed in French literature in France. Paul remembered an anecdote I had mentioned in a sermon once about how on my first test at the University of Strasburg, in Latin class, I had only received 4 out of 20, which caused me concern about my readiness for the French university system. (In my defense, once I got the system figured out, I passed the class with honors: amo, amas, amat!...). It was a wide ranging conversation.

We were surprised at one point to see three men walk up to our little church shelter. One was the leader of the local congregation of our previous association, one was a member of that association from Cameroon, and one was a former classmate of mine from Ambassador College now working in French-speaking areas for our former association. They had heard I was here (I had no idea they were in La Mé) and came over to be civil. We shook hands and chatted briefly before they went back to their building and group. It’s a small world sometimes.

I was asked to pray for a little village girl who had a fever, which, I was told, she often did. I was concerned to think of the life she had ahead of her. Born out of wedlock, she will grow up with a very young mother, and without a father. And she’s apparently a sickly child. There’s a hard road ahead for her, before she even really gets started. But such things happen with depressing frequency here.

Toward the middle of the afternoon, we finally said goodbye and shook hands all around. I encouraged everyone to concentrate on the festival coming in the next days, and said until next time.

Then we drove back to Abidjan, taking with us several members who were headed that way. Back in the wifi zone at the hotel, I was able to call my wife on Facetime, something we very much appreciate when I’m on the road.

Tomorrow we will start early, heading up to Man for the Feasts of the Eternal about to begin.
Other Entries
-

What wide-ranging topics you discussed, showing we all learn from one another. Running around wearing cow horns for missing a word must have been a memorable teaching technique in Paul's class. It's sad to think of the little girl so often sick and without a father. As you mentioned we have to concentrate on the Holy Days and the bright hope for tomorrow.