Into the bush for a solemn evening

-
This morning we left the hotel at 07:00. It was Sunday morning so there was little traffic. We drove to Treichville so I could change some dollars into CFA francs. The money changers sometimes argue with each other when a client drives up: whose turn is it? The guy who won didn't strike me as very agreeable, but business is business. We haggled over a rate of exchange until we found one mutually acceptable. Through my slightly opened window, I was handed a wad of bills which I counted carefully on my legs in plain sight. Then I handed over several new hundred dollar bills and watched while they were counted. The money changer smiled and gave Kramoko a tip for bringing a client to him. He pointed at his own face and said "you’ll remember me no?"

We then started out on the road to Yamoussoukro, stopping on the outskirts of Abidjan to put diesel in the tank. Filling it cost just under $100. Then back on the road. 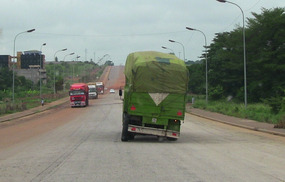 A little rear end problem....
It was thrilling when the toll road was completed a few years back, but the quality of construction was low enough that they already have to make major repairs in places including completely replacing some sections. It costs about 4 dollars one way to at the current rate of exchange to drive to Yamoussoukro, and I think it’s still worth it. From Yamoussoukro on, the roads are two lanes and in various states of lamentable. 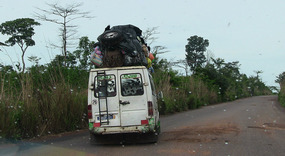 Pothole slalom
We passed a few UN vehicles, but fewer this time than in previous trips. The situation in the country is growing calmer. Since we were on the road an hour earlier than usual, we reached Yamoussoukro at 10:00; too early for lunch. So we continued on to the bad roads of the next leg to Bouafflé. This is one of the worst sections of the route; there is much weaving, not to say careening, back and forth to avoid the deep and sometimes wide potholes. Hitting one at speed would certainly blow a tire and could even flip a car. I’ve seen many cars actually stuck in potholes, one or two tires down so deeply that the car is grounded and cannot extricate itself. 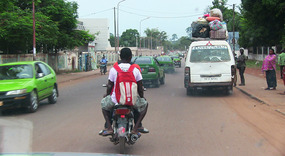 Passing through a town
From Bouafflé we went on to Daloa, then to Douékué, where we refilled the tank, putting about another $60 worth. Starting at Douékué and continuing to Man there are surprising rock formations, volcanic in origin I suppose, that dot the landscape. It’s as if someone got underneath the ground and shoved giants rocks straight up and out. 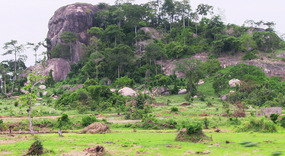 Rock formations
We finally reached Man about 2:00, the earliest we’ve ever arrived. I wish we could always travel on a Sunday, but of course that’s not always possible. Séussié was waiting for us on the outskirts of Man. He climbed in and we continued on to the hotel. I was disappointed to find that the temperatures seemed just as hot in Man as they had been in Abidjan. I had hoped for some relief from the heat, but it doesn’t look like that is to be.

We hadn’t eaten anything since early, so we drove to the Hotel des Cascades, where I took a room. Then we went to the restaurant, and asked what could be prepared quickly. Roasted chicken or fish, we were told. Two of us ordered chicken, the others carp. It was ready pretty quickly, and was well prepared. We ate quickly and returned to the vehicle, we had many things to do.

We stopped at the supermarket to buy tissues (we’re going to be mopping our brows a great deal), detergent (so I can wash out my clothes), and two six packs of water. We’re going to be going through a great deal of water in this heat. Then we drove to the hall reserved for the Passover service. It’s the same hall we used two years ago when I was here. Things were pretty well set up already, according to the instructions I had left. 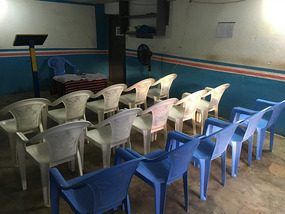 Our hall for Passover
I adjusted a few things, and then we returned to the vehicle, driving the short distance to the Hotel Goulou Marie, where Paul and Kramoco will stay. They don’t need the wifi like I do and the rooms are half the cost, and nicer than their homes.

I was dropped back at the other hotel where I prepared for the service in the evening. At 5:30, they came to pick me up and we drove to the little room. The air-con had stopped working; I hoped it was something easily repairable or this trip would take on a new character.

We finished up the preparations, and let the members in about half an hour before sundown. We were 17 people to participate. It was very hot in the room. We could have opened the doors toward the street but so much noise comes from that direction. We would have had big diesel trucks and other traffic passing just 15 feet away. So we kept the door closed. Within certain bounds, concentration is more important than comfort at important times like this. It was good that we had a fan to help make the temperature a little more bearable.

I wiped my face, head and arms almost constantly as perspiration ran in rivulets. Still the ceremony was, as always, very meaningful. We had to translate phrase by phrase, because about a third of those present didn’t understand French well enough to follow. 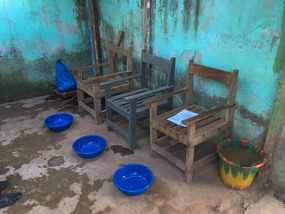 This is the kind of water they have and use here
This was one of few occasions when the feet I washed, really needed to be washed. The member didn’t have a towel; many people can’t afford such luxuries. So after washing his feet in the darkness of the small back courtyard, I used my hotel towel. The white towel had some very brown spots after I dried his feet, I would have needed soap to get them really clean. I washed my hands and used sanitizer before continuing to the part where I broke the bread, but no one worries about that here, the way we do in the West. I noticed as we moved about that I wasn’t the only one who had soaked through his shirt, others had as well, but there’s not any practical way to avoid these circumstances.

We finished up about 8:00 pm and said goodbye to everyone until tomorrow when we’ll spend the day visiting all the individual villages groups. Then we’ll see each other again on Tuesday which will be a high day. We drove back to my hotel, where we agreed to meet at 07:00 in the morning. We said goodbye for the night. There was a very noisy wedding celebration going on the pool terrace, where I would have preferred to sit, so I went to the small bar and allowed myself a cold beer; ah those first few sips were ambrosia!

Then I headed to my room to dry out in the air conditioning. This took half an hour during which I caught up on some electronic “paperwork.” I won’t stay up late because I’ll be up at 06:00 tomorrow morning. We’re going to make the rounds of the little congregational groups in the region.
Other Entries
-

Thanks for working in difficult conditions to serve our brethren in this part of the world! We have so much in the western world that I don't even think about until reading blogs like this. Praying for your continued protection and safe travels!

Thank you for taking the time to describe your trip, the money exchange, the potholes, the heat, and the humble Passover--each phrase translated. Very much to think about.