Visits in the bush around Man

-
This morning, I was up at 06:00, though I would easily have stayed in bed a little longer. I washed out some clothes and hung them to dry in the room. At 6:30 Paul called to let me know they had already arrived. I knew they were hoping I'd provide breakfast, which was entirely understandable; they live quite close to the bone. We had coffee, our last breakfast pastries for a while and a plain omelet each. By 07:10 we were on the road starting our rounds. 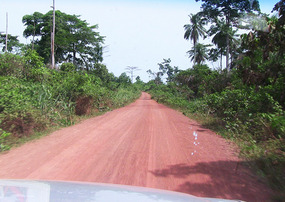 On the piste again
In the first village there were five adults and twice as many children. We sat under a shelter as it drizzled lightly and talked for 20 minutes. They welcomed me and then gave one of two sermonette-like talks I had prepared for the day. One was about reasons why we should keep the NT Holy Days. The other was a description of what happened on this day (Passover) at the time Israel was freed from captivity and the other Christ’s last Passover with His disciples and the timeline of His crucifixion. I find many times members don’t have a firm chronology in mind, and to describe events carefully and colorfully can help them remember and have a better grasp of what happened. I gave a variation of these two all through the day.


They asked me to bring them copies of the photos I take of them. I said I would try to remember. We couldn’t stay long because we were scheduled to visit nine different groups in one day, with sometimes significant drive times in between. From the first stop we had to drive back through Man and another 40 minutes beyond that to reach the first very remote village. 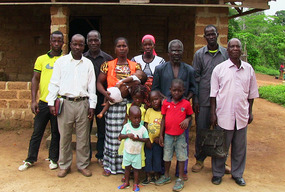 Second visit
We stopped at the house of the local congregational leader who offered us a choice between Coke, Sprite and Fanta. I chose the Sprite because I was pretty sure I’d be drinking a lot of Fanta through this day. After my talk, they little group expressed how eager they are to be baptized. So I spent half an hour with them going through my introduction to baptism preparation. I told them we would come early to their village tomorrow, before the start of the service, so that we could continue the discussion. 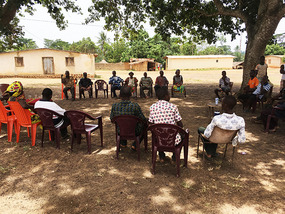 Under trees
We took a group photo and then returned to the Pajero, to drive on to the next village, where the process repeated itself. These villages are separated by drives of anywhere from 20 to 40 minutes on dirt roads. The places we sat included shady spots under trees, houses, and wall-less town halls or chefferies (chief-eries, where chiefs receive people). 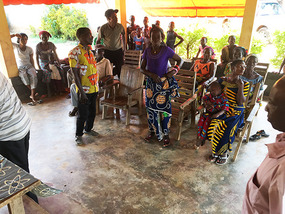 In the middle of the day
We would be formally welcomed and offered some Fanta, I would be invited to speak, and would take a few questions and we would leave. One question I answered about six times this day is a question I’m asked all the time by people new to our association: why do you pray (this is how people here ask where you go to church…) on Saturday when all other churches pray on Sunday? They already know the answer or they wouldn’t be attending with us, but the idea is so striking and incredible to them that they want to hear a confirmation from the white man. Is this really serious? Can a church really go against the flow like that? 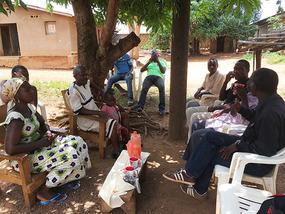 Yet another little group
Seventh day churches are quite unknown in this area, so this is a strikingly new proposition and people have a hard time getting their minds around it. So I patiently answer the same question over and over again, every time I come here. Someone asked if Christmas is not in the Bible how did it come to be? I always have to answer the question at least once about why we allow the consumption of alcohol, this also is different from what most churches teach. 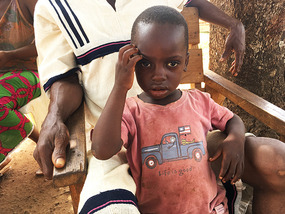 His T-shirt says "Life is good"
In one little hall we were welcomed by one of the village chief’s advisors. He’s interested himself and attends services, but he also comes in an official capacity. He asked as he always does that we fix up their hall. He tried a little flattery: they needed a hall worthy of the visits of such an eminent and respected man of God…. I responded that I had not forgotten their request, and was keeping it in mind. 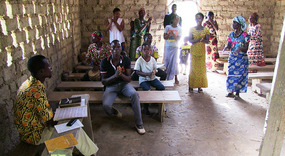 Another visit
At the last stop of the day, most of the men were working, so the hall was full of women. Three of them asked to see me in private, and presented a project to help them get ahead financially: they want to build a small restaurant. They already prepare food in the market across the road, but with enough capital they could earn much more for their families, they explained. All they need is a thousand dollars…. This project would have a better chance than most to actually work, it seems to me, but it sounded to me like they were already doing pretty well and it’s better for them to work up slowly than to have a huge lump of manna fall from heaven. There are some many requests for projects, that it’s not possible to fund them in a fair manner. Perfect fairness is probably not possible in this life, but we try our best. 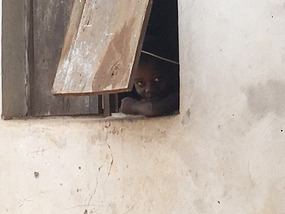 Someone's peaking at me
As my father once told me when, as a child, I complained that something wasn’t fair: well life wasn’t fair when I was young, so if it were fair for you, it wouldn’t be fair….

We had left at 7:00 am, when we finally rolled back into the hotel parking lot it was 5:30. I had drunk about10 glasses of Fanta and Sprite, and eaten a little fried banana, but was pretty hungry by that time. Such days are tiring, even though we sit through most of them. The jostling of the roads and the concentration of making presentations and answering questions make for a full day. It does a lot of good for the local members, a confirmation that they matter in the great scheme of things, that they’re really part of something greater than just their own lives. It gives the local leaders credibility with village authorities and other villagers too, which helps them in their work.

Because the members in the area are so spread out, it’s not practicable to get everyone together for NTBMO, so I’ve encouraged people to get together in small groups in their respective villages. Paul and Séussié and Kramoco and I had a nice dinner at the hotel. They had their usual grilled fish or chicken, and I had beef Stroganoff, which was pretty good, although they served it with spaghetti instead of broader pasta.

Tomorrow we plan to leave at 7:30 for the first of two services, which will be held in two different villages to make it possible for the members to walk to one or the other (some will walk hours, but that’s common and normal).
Other Entries
-

To visit nine villages and answer questions is so laying down your life for others. It's understandable that it gives value and credibility to the brethren. The Sabbath question leads to discussing it as a sign. That must be an encouraging part of these visits, answering important questions.

I am Kylie. I am ten years old. I read this and thought it was interesting. My twin sister Lexie said she wants to go there to teach the people to knit. We are praying for you and the brethren there.

Thank you for the comments Mary and Kylie. I appreciate you taking the time to write. Please tell Lexie that it would be helpful for her to teach knitting here. It can sometimes get cold at night, and people don't always have warm clothes. Thank you for your prayers!

What amazing conditions in which to preach, teach & counsel! I have no doubt that God works through these circumstances & I appreciate your willingness to fight though the distractions. :)

I have no doubt that God is able to work through the din. But I can only imagine the challenge of trying to overlook the distractions. :)