A festival in the bush 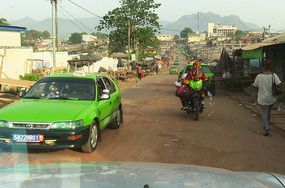 Heading out of Man
My three companions arrived a little after 07:00 this morning, while I was already into my first cup of strong coffee. I had slept well and so, they said, had they. Paul actually overslept which is why they were a little late. We discussed the night. Last night had been frustrating for my wife and me. There was something wrong with the wifi, so our FaceTime connection would not allow a proper conversation, just few words here and there separated by silence. When we finally decided to bite the bullet and pay to use the local cell service which is expensive, even that wouldn't work well. The frustration level rose to the point where we gave up on the idea and decided to stick to texts and e-mails, which aren’t nearly as pleasant. 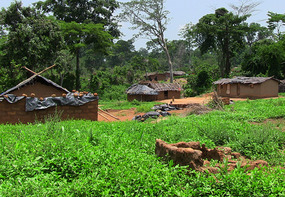 A very remote village
We were ready to roll at 07:40, retracing our route to a village we had visited yesterday. It took an hour to reach it, longer than I had remembered. We entered Michael’s house where the little living room had been prepared with benches and chairs. I first met with about 10 people preparing for baptism, and began explaining the first section of what I normally cover. At the end, two men came forward and reminded me that they had been in on that material late last year in another village, and could they go farther? I agreed to meet with them after the service. 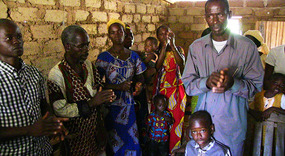 Special music in the morning
We started the service at 9:30 when the heat was not yet troubling. We sang hymns, had a prayer and gave our offering. Then I spoke for an hour on the New Testament meaning of the Days of Unleavened Bread. Everyone present spoke French well enough that I didn’t need to have a translation. After yesterday which was grueling in part because of the translation issues, this was a pleasure. It also allowed me to cover more material, because with a phrase by phrase translation, the speaker only has half his usual time and so much reduce how much he covers. 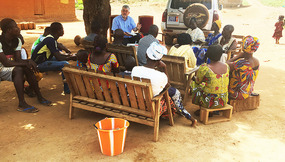 Your's truly, teaching under a tree
By the time I finished it was 10:45 and the heat was noticeable. I decided to meet with the two men outside under a large tree where we’d have shade and catch any movement in the air. So almost all the furniture was carried outside and arranged under the tree. I had intended this session for the two men who were farther along in their preparation, but no one wanted to be left out. So there were about 20 people seated around listening. We wouldn’t cover anything personal this session, so I decided to let them stay; we might gain some time, which is always at a premium. I read through Romans 6, 7, and 8 with them, giving explanation and occasionally asking questions: what did Paul mean when he wrote that we’re not under the law but under grace? How are we delivered from the law?

At one point I asked what Paul meant when he said we no longer serve under the letter but under the spirit of the law. No one knew how to answer. So we turned to Matthew 5 where Jesus explained the difference of the letter of the law compared to the spirit. I always go over this with people preparing for baptism, because it’s a lot less difficult to obey the letter than the spirit, which means much more of our effort will be expended respecting the spirit of the law. I've never killed anyone, but I can't say I've never gotten angry with anyone in a wrong way. When I took over my first pastorate, thirty years ago, I was surprised how many members didn’t have a good grasp of this, so I try to get to it early.

Lunch
I was ready to leave, but the women had prepared a meal for us. They brought out white rice, chicken in sauce and their much-beloved (unappetizing in my view) viscous spinach sauce, Fanta and tonic water. The plate they handed me wasn’t entirely clean, neither was the fork, but I could work with it as compared with the spoon which was not even close to clean enough to pt in my mouth. 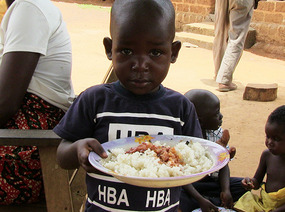 Following Mom's instructions
I worked the fork clean on my shirt tail and accepted a piece of chicken, with some rice and sauce. I’m usually safe with rice and sauce, so I had a little to acknoledge them for their work. But I quickly discovered there was grit in the rice, blowing sand I assumed, so I decided the food wasn’t clean enough and I discreetly gave the chicken to Paul who accepted gratefully. They women always watch me to see if I’ll eat, and are disappointed when I don’t take a big helping and really chow down, but at least I eat a little – with a prayer.

Sharing lunch
I took some photos of the meal; a couple of little children were especially cute eating out of the same plate. A mother told her little boy to go stand in front of me so he could be photographed as well. He blocked my view as instructed until I took his photo.

Since I finished first, I strolled around a bit. It’s an interesting village with a few picturesque views of forest all around, and really quite remote, even for a remote area.There were other views not so picturesque. For your consideration a typical West-African toilet/bathroom. They do the best they can with what they have and they know. 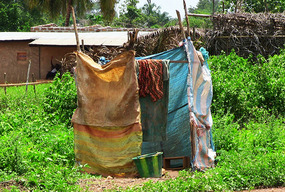 A typical toilet/bathroom
Finally about 12:15 we climbed back into the Pajero and retraced our route to Man, arriving about an hour later.

Because we wanted to avoid having our second service in the heat of the day, it was planned in a village far from the first, at 4:30 pm. It would be hot enough even at that time. So I rested in the air-con of my room and caught up on a few things; there are always plenty of items to tick off check lists. I called Marjolaine again, but the call kept dropping as before, so we gave up until I’ll get back to Abidjan. 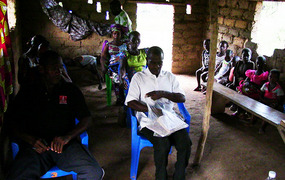 Late afternoon service
A little after 16:00 (4 pm) the three men and our vehicle were back to pick me up. Kramoco said he was concerned we might not have enough diesel in the tank. The vehicle's owner has purposely left the fuel gauge broken, so we must always approximate and therefore err on the side of putting in too much, which in the end he gets to keep of course. I’ve decided I will not accept this vehicle again unless the gauge is repaired. After fueling, we drove about 25 km down the road over which we had come from Abidjan, to a village where four members were waiting. They climbed in the back of the Pajero before we drove about another 20 km down the pavement, then turned off onto a dirt road I’m coming to know well. Another five or six clicks and we arrived at a little mud brick structure which is the church hall. We weren’t able to start until 5:00 pm, but it was still hot enough that everyone who hadn’t gotten out of an air-conditioned vehicle was already quite moist, while those of us who had done so, quickly joined them. We sang hymns, had an opening prayer and gave an offering, then I again spoke for about an hour.

Among the frustrations of trying to teach here are the unavoidable distractions. The heat is a distraction; it makes people sleepy, and divides their attention since they’re periodically wiping their heads and bodies of sweat. The doors and windows must be left open to have some air circulation, so the noise from outside is a major distraction: crying children (very frequent), roosters crowing, dogs barking or fighting, trucks rumbling by, motorcycles without functioning mufflers, villagers shouting at each other, and I could go on; we hear them all. 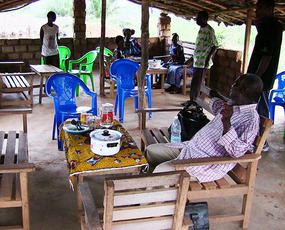 Dinner
While I was speaking, a small gang of bored village children came to the entryway and jostled each other to see what was happening, a member got up to shoo them away. Then a semi parked on the road just outside the little hall and the driver left his engine idling for several minutes, and there were other incidents. Sometimes it’s hard for me to concentrate, and I’m the one speaking! I have to believe that, with divine help, some learning occurred.

After the service we talked a while, and I was told a member wanted me to visit his house in the village. I agreed, and we walked a few hundred meters to a structure which was not a house but a bar or restaurant. A meal had been prepared for us: chicken in peanut sauce and rice. I had tried to eat in this village once before and it was the worst I’d ever had in Africa. My meal ended after one bite. It was well and truly awful. I won't ruin your appetite with a description.

So I wasn’t going to try again. I just smiled and said I would have any this time, but for the others to go ahead, which they did. It saddens me to see people used to such conditions when they could easily do better even with what they have available. But they’ve never learned to do better, don't really even recognize what better is, and I can’t change this world, an unpleasant but necessary lesson I learned during my first few trips.

Finally back at my hotel, I said goodbye for the night. We agreed to meet for breakfast at 7:30 so we could start out at 8:00. After they left, I sat in the restaurant and ordered a beverage for my stomach’s sake, which in this case was truly indicated. A plate of spaghetti followed and got me back to a sense of normalcy.

Now the pastoral work is done for two days, both tomorrow and the day after will be travel days.
Other Entries
-

What sad conditions with the noise distractions and the poor quality of food. The bright point is your assigning the spirit of the law exercise and the cute little boys sharing a plate. It must be hard to teach and hard to learn, but you had people who asked to learn more. Hope the travel days are uneventful and that you find some good internet connections.

I am Alexis Kylie's twin sister. I thought that your blog was very exciting and to see what they eat it's so different to how we eat! Do you always wake up at 0:700 in the morning to start your day? Was it different to teach service under a tree? One day if I ever went there I would like to sit outside to hear the sermon. It would be a new way of doing things. I hope the weather will get cooler so you don't have to speak in hot weather! I will be praying that your next trip goes well and for all the people there.

Hi Alexis, I'm glad you liked this blog post. Foods are different all over the world. Sometimes I have to get up much earlier than 07:00, sometimes it's 4:00 in the morning. I like to teach under trees, it's cooler. Thank you for your prayers!