Back to the coast

-
My travel companions were on time this morning at 7:30. We had fresh pineapple, a cheese omelet each and a couple of cups of very strong coffee which I mix with milk. They wanted to remind me about the need to register the association, and Séussié told he was behind on his rent by several months. Could I help him out with the equivalent of 65 dollars? I gave him $50, and he said that would do. We don't hire our volunteer contact men, but we do help a little now and again. We want to help appropriately, but I’m always concerned to prevent church assistance from becoming an entitlement. I’ve seen that happen and it’s not good.

At 8:00 I had a porter take my bags to the desk where I settled my account. It must be paid in cash, no cards accepted, the same for the rental vehicle later today. We were on the road by 8:30, dropping Séussié at his village a few km from Man, then began retracing our long, winding course, south, east and south again. 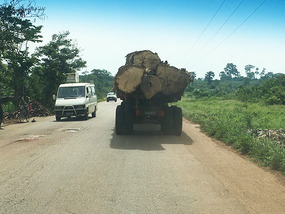 Logging trucks are becoming common here now
We arrived in Yamoussoukro at 12:30 so we stopped at the Brize restaurant for lunch. I had spaghetti again, comfort food I suppose. Kramoco had his usual, carp, braised this time, which he eats with his hands. It’s an expert operation, obviously practiced many times. Paul had braised chicken. Around us were several tables of French women, their accents were clear. This is a popular spot with expats.

Now we turned onto the toll road that we would follow for 200 km to Abidjan. Speeds increased even more and we saw more than one close call. In fact we were run off onto the shoulder by a careless, aggressive driver. I told Paul and Kramoco stories of driving on the German autobahns in sections where there is no speed limit. My VW turbo-diesel (very economical in France where diesel is not taxed as much as gasoline) at the time could comfortably cruise at 160-170 kph (around 100 mph). But many were the times when I was driving that fast and a big Beemer or Porsche would blast by me as if I were parked. Often I would be in the left lane passing a slower vehicle and far back in my rear-view mirror I would see headlights flashing, which is German for Achtung baby, moof ofer! And in an amazingly short time those distant headlights would morph into the front end of a car on my bumper. And if I hadn’t been fast enough to move over, there would be an irate driver behind the wheel. OK don’t let’s get too far into German autobahn stories…. I’ll tell more of those someday when I write from Germany. We’ll just say that Kramoco, as a pro, especially enjoyed them. 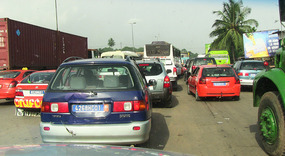 Lanes are optional
We arrived back in Abidjan around 4:00 and hit heavy traffic. Lanes became wishful suggestions as drivers competed to get ahead. The shoulders were fully used, and buses, semis and cars came to within inches of each other. We lurched along for half an hour before coming to a wrecked truck that had caused the slowdown. 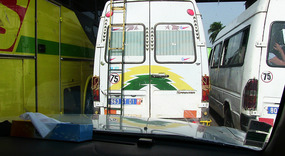 Close shaves
We drove across the new toll bridge which spans the lagoon, and on to the Ibis hotel in Marcoury, which is close to the airport. I hadn’t stayed at this hotel in a while; I use it when I want to be near the airport. I also like it because it overlooks a very busy city street, which presents interesting possibilities for video and photos. 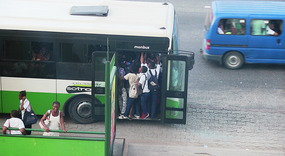 Always room for one more
When I first came to this country 13 years ago in the middle of its civil war, I would see from these windows convoys of military vehicles and others of UN vehicles. There were checkpoints everywhere. Now I saw new cars and buses (a little crowded at times) but new and in good shape. The transformation is striking and encouraging.

I was finally able to have a long talk with Marjolaine which was wonderfully refreshing after a few days of garbled sentences.

Tomorrow, if all goes as planned, I will fly on to Cameroon.

Glad to hear of your safe travel, although a little hectic.