-
Thursday morning the hotel shuttle to the airport did not go at convenient times for me so I took a taxi the few minutes to the airport. I had to wait a few minutes to be allowed into the check-in area since the counters weren't opened on time. The ASky flight left a little late, but not very. ASky is a new and pretty dependable airline; I’m hoping it won’t go downhill as so many others have done.

Abidjan has one of the best airports that I’ve seen in sub-Saharan Africa, and they keep trying to improve it. One thing I find fascinating is these airports is the obscure and adventurous destinations one sees on the flight board. This one showed flights leaving for Beirut (Lebanon), Ouagadougou (Burkina Faso), Conakry (Guinea), Niamey (Niger, not to be confused with Nigeria), and Bamako (Mali). That’s a handful of pretty exotic destinations. 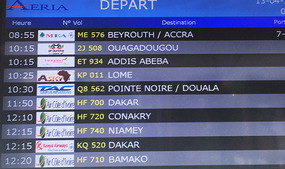 Exotic destinations
On the way to the gate I took a photo of the temperature readers. These automatically scan the body temperatures of passengers as they deplane, alerting health authorities about any who are feverish. This is not so important during normal times, they weren't functioning today, but if there is an Ebola outbreak for example it becomes very important.

I had eaten an omelet for breakfast because I was pretty sure only sandwiches would be offered on the flights. This was true on the way to Lomé. At that airport my connection time was very short. In fact I had to hurry through the security checkpoint and walk straight to the gate where I was among the last to board. I wondered whether my suitcase would make the transfer. 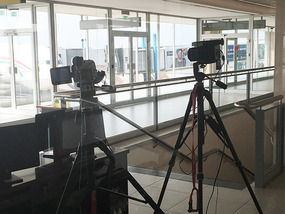 Temperature scanners ready to go
On the flight to Douala, a hot meal was served: chicken and rice, which was quite welcome. The suspense at baggage claim lasted a few minutes, but my suitcase finally appeared. I took an airport taxi to the Ibis hotel where I checked in and went across the street to a convenience store where I bought a small packet of detergent, so I could wash to some clothes in the sink. I do this for two reasons. First sometimes I’m not in a hotel long enough to have laundry done (it can take two days), and second, it saves a little money since hotel laundry service charges by the piece and it adds up. I have quick-dry shirts which I can wash out at night and wear the next morning.

Once the clothes were up to dry, I called Marjolaine again and we discussed our respective days. I e-mailed Armel to ask him to be at the hotel with car and driver as close to 07:00 as possible.

I had a salad of raw vegetables for dinner; I won’t be having any more of that for a couple of days. Tomorrow we plan to travel to the rural village of Éséka, where most of the members in Cameroon will have gathered for Friday and the Sabbath.
Other Entries
-

New names for many of the African countries. You will be in our prayers.

Just planing ahead about the possible food choices on the plane and in the hotel can be challenging, but especially so during DUB. So happy you and Marjolaine were able to connect better.