-
This morning, Armel and Dieudonné arrived at the hotel at 07:00 as requested. Jean-Jacques would again be our driver in his old Toyota Corolla. We loaded my luggage in the trunk and drove to the Akwa district where there are always money changers on high alert. The two men that stepped up tried to convince me the rate should be about 10 percent less that what it actually was. They were a bit taken aback by a manner-of-fact approach of insisting on a decent rate. They even smiled when at the time they held back giving me the last two bank notes I had coming, and I said "come on, come on, hand it over." Cameroonians are often wheeler-dealers. So they can admire a bit of audacity, even at their own expense.

Money changed, we started out on the road toward Yaoundé, stopping to fill the tank for $60 on the outskirts of Douala. 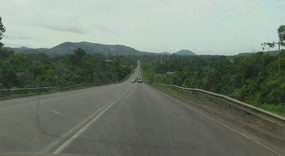 The highway toward Yaoundé
We drove 90 minutes to Édéa where we crossed a river near a spectacular waterfall, then continued another hour toward Yaoundé before turning off the main road to head south toward Éséka. The road has improved quite a bit; there are a few potholes, but there have obviously been repairs of late and they are most welcome. 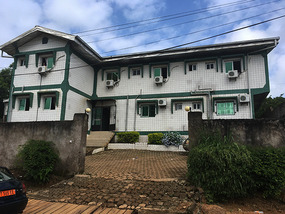 The Eséka palace
Finally a little before 11:00 am we arrived in the village and drove straight to the misnamed Éséka Palace. I took an air-conditioned room for $20 and hoped there would be electricity during the night. There was no running water when I checked in. I anticipated a bucket bath in the morning. From the hotel we drove to Mélanie's home where a small group of members had gathered. Because of the heat which was about to become oppressive, we pulled chairs outdoors and sat in shade to talk.

There were some Bible questions:At 12:00 lunch was ready: chicken, spinach sauce, rice and tomato sauce, fried banana, plantain, and white yam. I contributed a box of matzo I had brought. Several people present had never seen commercial unleavened bread, it was a novelty to them. Everyone ate in silence as is usually the case. Concentrate on the food, you don’t know for sure when you’ll next eat! We ate inside the house, perspiring as we did so. It was in the low 90s F (low 30s C). 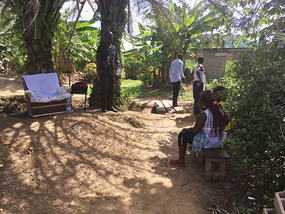 Q&A in the open air: my tribune
After lunch we moved the chairs outside under the shade of a tree where we could catch any breeze. They put an armchair for me on a little mound and spread their chairs and benches around. It was sort of a podium on which I was seated; I felt honored

Here there were more questions: 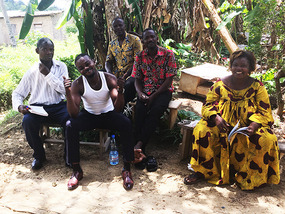 In the shade
These and other questions went on for several hours. The members encouraged each other to ask questions. Solomon was asked why he didn’t ask questions. He responded “I don’t have any, but I learn from listening to yours!” 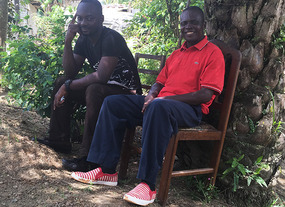 Under the trees
At 3:00 pm we decided to take a break and reconvene about 5:00. We drove over to the Palace, and put my luggage in the room. It was very hot. I put on some shorts and sat by the window, resting but sweating profusely, to the point where there was a puddle of water at my feet. After an hour of this, the woman from the desk, knocked on the door and said the electricity had come on, I could turn on the air conditioner, which I quickly did. It was wonderful to finally dry off!

About 5:00 when I was supposed to be picked up, a terrific thunderstorm swept through with heavy rains. This lasted several hours and put an end to our plans of reconvening. In heavy rain, one can hear very little in houses with corrugated tin roofs.

About 7:00 pm three young adults came to the hotel to counsel with me individually about personal issues. They were wise to ask, and I think the time we spent was helpful in helping them see various situations more clearly and in multiple perspectives.

When they left I went to the little restaurant to see if they had a cold beer, which they did, but no food. So I dined on Triscuits (roasted garlic flavor) and a beer.

Now I will hope that the electricity stays on all night.
Other Entries
-

I love the way you make your travels come so alive :-) Your answering, their questions, help me with questions I wouldn't even think to ask :-) I guess sometimes I just take things for granted :-( Thank you again for your time and help to our brothers and sisters in that part of the world :-)

Truly appreciating your narrative as you make this journey.

We're happy you have had a good session with everyone there. It's always interesting to hear the questions you are asked--especially timely with world events. We hope you have electricity and air conditioning to balance out the hours of heat and humidity. Nice to see photos of brethren, all smiles.