A day of rest and back to Douala

-
The electricity was on all through the night so I slept very well until 05:00, first light, when other hotel guests were roused, and started revving their car engines, testing their alarms and generally making enough noise for an army. Africa is often a noisy place, at least where there are people. It just seems to go with the landscape. Few places are soundproofed, the Palace certainly isn't. I dozed a little after 5:00 but didn’t sleep soundly. I finally rose about 6:00. 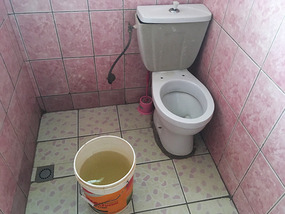 Ready for a bucket bath
There was no running water, so I went down to the desk and asked for a bucket, which was brought to my room so I could bathe as best I could. I felt fresher afterwards in any event 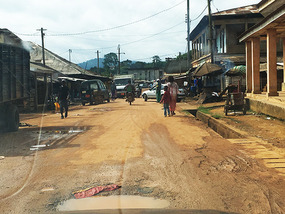 A street in Eséka
We had agreed to meet at 8:30 so we could start the service at 9:00 before temperatures really heated up. But no one came until nearly 9:30. They had stayed up late, excited to be together and to be able to talk about the Bible and the questions and answers from yesterday. 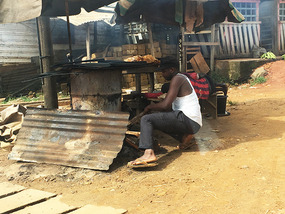 Grilling meat
It is always a colorful drive through Eséka. It's colorful literally because of the brightly colored clothing people favor. It's colorful figuratively because of all the activities one sees in the streets. There are hawkers carrying wares on their heads, others are shouting out what they have for sale: "I have water!" Others are selling food of various kinds: meat is grilled over a barrel, oranges are peeled and ready to eat, nuts are sold in small plastic bags. 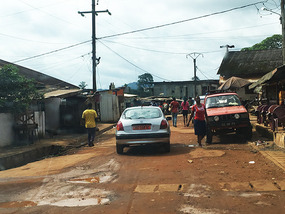 Another street in Eskéka
We began our service a little after 9:30; there were 12 people present. We sang hymns and had an opening prayer. Jules gave the sermonette based on an article from Discern magazine. Since we have to translate all the articles, proofread the translations and lay them out in InDesign, I know most of the articles pretty well. I have encouraged the men who give sermonettes to base them heavily on church literature to be sure they’re on solid ground doctrinally. I was happy to see that Jules was doing this. 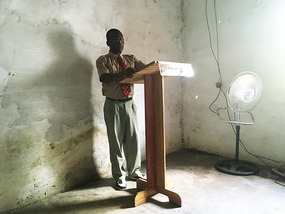 Jules gives the sermonette
After another hymn and a few announcements, I went to the lectern to give a news update, and then the sermon about the Days of Unleavened Bread and how they are clearly a New Testament observance. We finished about 11:00, after which I anointed four people for various illnesses. One father asked me to anoint his son because he thought the devil might be working in him. But after I listened to his description, it sounded to me more like he was a mischievous little boy that often got into trouble testing his limits. Satan doesn’t need to be much involved in that kind of behavior.

Then I had a counseling session with a young person preparing for baptism. We read through Romans 6-8, chapters that have a great deal to do with baptism and the Christian life, and Matthew 5, where Christ underscored the difference between the letter and the spirit of the law. 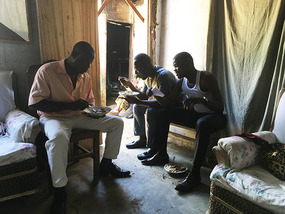 Lunch
At 12:00 lunch was ready: beef, potatoes (those are for me) rice, fried bananas and chicken in broth. I ate some beef and potatoes which were still warm and very tasty. 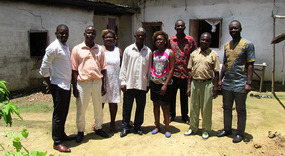 Most of the adults
After the meal we sat and talked about many things for an hour or so. Then I took my leave. It should only take three hours to get back to Douala, but the unexpected can always intervene, and it’s much better to be buttoned up after dark. Potholes become harder to spot, traffic is more dangerous, and criminals are more active after nightfall. We were five in the car when we started back to Douala. The shocks in the old Corolla had seen better days, so we bottomed out a few times and even small dips in the road caused hard impacts. Jean-Jacques put hymns on the sound system, playing off a USB drive, but periodically we’d hit a bump and the player would stop. Later we’d hit another bump and the hymns would start playing again. 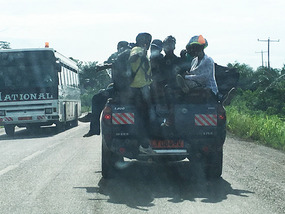 Heading into Douala
We arrived back in Douala a little after 4:00 pm. We dropped two passengers at the entrance to the city, where they could catch moto-taxis to their homes. The other passenger came with me to the hotel, where I have him a little assistance to help him through a rough period. We then said goodbye and parted company, until my next visit, probably just before the fall festivals.

I was able to have a long, relatively clear conversation with my lovely wife, a high point of my day.

I again had a salad of raw vegetables and vinaigrette for dinner. I miss that when I can’t have it.

Tomorrow will be a long travel day, to Rwanda via Ethiopia. I won’t arrive until after midnight if all goes as planned, and we’ll have an early start Monday morning for the last day of UB.
Other Entries
-

Thanks for the update and including pictures, especially of the street scenes, Jules speaking and the brethren. It's encouraging to hear that services started late because the brethren were happy to be together and stayed up talking about biblical questions. Glad you had safe driving on this leg of the visit.