-
I could have slept in until 7:00 this morning but I woke earlier, tossed a while and realized I was awake. Armel ask me to receive him at 08:00 this morning he has some things to discuss with me. So I had breakfast and was ready to talk at 8:00, but he had had something urgent come up, he didn't make it. He e-mailed later to say he'd been called urgently back to Yaoundé.

A young woman who lives in Douala and who has asked to start preparing for baptism did come by about 9:30 and we chatted for half an hour. She wasn’t ready to go any farther in her counseling but she wanted to meet and confirm what we would cover next.

So I had most of the morning to work. I caught up on e-mail and worked on an upcoming presentation for several hours and repacked my bags.

At 12:00 I had a small salad for lunch, and then checked out so I could catch the 12:30 shuttle to the airport. Getting to the departure lounge in Douala is a bit of a chore. There is a security scanner at the terminal entrance. One must show papers to men inside, then again to another agent controlling access to the check-in area. The check-in itself with Ethiopian airlines went quickly and well. 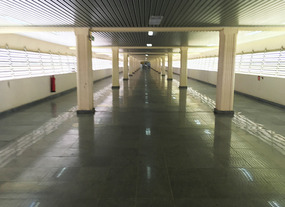 The long walk to the gate in Douala
Then one walks out to emigration, and fills out the same card filled on arrival. Then to an emigration agent who takes a photo and electronic fingerprints. Then came the long walk to the lounge. On the way another uniformed agent sitting on a chair in the corridor stopped me and asked to see my passport and boarding pass. She asked me if I had any cash on me. They’re very interested in cash in Cameroon, and its hard to say which checks are legitimate and which may be a set-up for something. The corruption level is so high hear it’s often good to be a little paranoid. I said I did. She asked how much. I gave as vague an answer as I could, and let me pass.

At the actual boarding gate I had to show my passport and boarding pass, then empty pockets into trays, put my bags through a scanner, and walk through one myself. Right away there is another door, at which I was asked to show all my papers again. Then an individual bag search. The fellow at the table starts by telling me I have too much baggage, one carry-on only is allowed. I ask him not to hassle me. He becomes aggressive. "I’m not hassling you, are we going to have a problem here?" I push back to let him know I won’t roll over. I point to all the people in the lounge behind him who have a roll-aboard and a small shoulder bag like me. He says he will have to ask his supervisor, but he’s going to watch me. I’m pretty sure he’s trying to hustle me out of some money. My suspicions is confirmed later when I see a few minutes later that he’s gone and other passengers are entering the lounge without the additional carry-on check. Corruption everywhere.

An Ethiopian 787 (the “Dreamliner”) lands and offloads passengers onto the tarmac. Jet bridges are almost never used in Douala, and only a few are serviceable, some have rusted into place. When the time arrives to board, we file out, down the stairs onto the apron and walk out to the plane. The stairway is high. I’m pleased to see I’m sitting in the front of coach class. That will help me deplane quickly and get through the formalities in Addis.

An Indian couple sat next to me; there are many on the plane, probably going home to India for a visit. The flight lasted four hours during which a meal was served. There was a good selection of films to view on personal screens, but not really any I wanted to see. I read more of The End of Europe and followed our flight progress on the map screen. The sun set about the time we cross the border into Ethiopia.

Flight path to Addis Ababa
We had a pretty hard landing in Addis. We filed down the stairs and packed into a bus which took us to the terminal. There we went up to the departure level and went through yet another full security check, laptops out, shoes off etc.

I made my way to the departure lounge are where I had half an hour to do a few things on my laptop. The airport was packed; I don’t think I’ve ever seen it this full before. It’s a new airport but they’ve already realized they didn’t put in enough toilet facilities, I made the rounds and saw there were lines at every one, and they had even brought in some container like toilet modules to augment the number.

The plane was supposed to be a 737, but I suppose there were few enough passengers that they went with a Bombardier Q400 turboprop, plane. These fly about 100 mph slower than a 737, to our trip took longer than planned. We were supposed to land in Kigali at 12:15, just after midnight, but it was actually nearly 12:45.

Rwanda has reinstituted a visa requirement. They can be obtained on arrival, but this requires standing in two lines. First to pay for the visa and get a paper proving it, then in the actual immigration line to have one’s passport stamped. This concluded and my bag collected, I caught a taxi to Chez Lando, my usual hotel in Kigali. They had no trace of my online reservation, but they had rooms, so I was able to get one and settle in. This will be a short night.
Other Entries
-

Just reading about the corruption and hassling for money is frightening. I'm glad that you've had enough experience to push back, yet it's sad that travel becomes so difficult. Hope your next days are peaceful.

I checked "like" but the details make your trip sound very tiring.