A high day in Rwanda

-
According to my fitbit, I got to sleep last night at 02:45, and I woke when my alarm went off this morning at 06:30. We were supposed to leave at 07:15, and I wanted to be able to have breakfast. The walk to the restaurant was pleasantly cool. After the grinding heat of the first part of this trip, the cool temperatures of East Africa are most welcome. We just south of the equator here, only two degrees south, but were also at an elevation in Kigali of 5000 ft (1500 m), which makes for pleasant cool weather much of the year. The local people, who are mostly very thin, need to wear jackets for warmth. I've acquired enough natural insulation, that shirtsleeves are a joy.

I was ready on time, but my usual driver, Ndio, didn’t arrive until close to 7:45. Muneza was waiting too. I was happy to see Ndio had upgraded his vehicle; he’s now driving a Toyota Prado Landcruiser. That’s about as good as all-around civilian 4WDs get for bumping around with some comfort in Africa. This one, I could see, used to belong to the Red Cross. To avoid having external rearview mirror stolen, many owners will have their license plate number etched into the glass. In this case it was not the license number but CICR, which are the French initials for International Committee of the Red Cross. 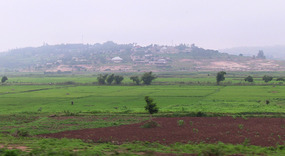 Rice paddies
The three of us drove through Kigali, finally arriving at the RN3, the two lane highway that would take us toward Giti, and if we continued rather that turning off, would take us to Kampala in Uganda. We drove about half an hour on the RN3, passing many rice paddies in the valley floor, before turning to the right onto the dirt road that leads to long, thin Lake Muhazi. Just before reaching the lake we turned left and started up the mountain.

We’re in the rainy season and this road can be treacherous when wet. The soil becomes a viscous, rutted mess in which it is easily possible to get stuck or to slip sideways or backwards. One of our usual van drivers, a very nice honest fellow, died not long ago when his van slipped over the edge and rolled down the mountainside. It was good that we had a dry day for the trip up. 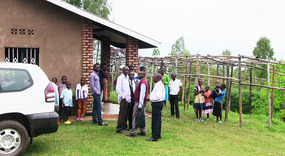 Arrival at the hall
We passed the van with the members from the Kayenzi area; another hour’s drive on the other side of Kigali, and arrived a few minutes before they did. It took a few minutes to get organized and then we started the service. Jean-Baptiste gave the sermonette, we gave our offering and I gave some announcements , and proceeded to the blessing of a newly born baby. Mr. Mundeli and I asked God’s blessing Sangwa Dolly. These are always joyful events. 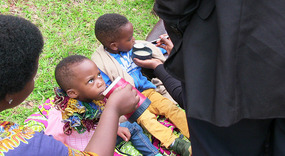 Breakfast
The chorale sang special music and then it was time for the sermon. I spoke with a phrase by phrase translation, giving the same sermon I had twice before on this trip. We had started a bit later than usual so we finished later too. 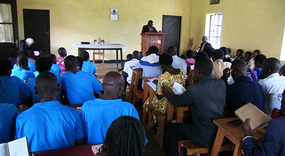 The sermonette
The children were set free to run and play outside and the baptized adults convened to present some requests and ask some Bible questions. The requests included some financial assistance to enlarge the cistern they use for their water supply at the Feast. It needs to be larger to avoid having to carry more in from outside. 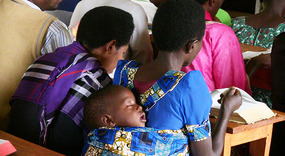 Sleeping in church!
They asked for some financial assistance to buy food to get them to their next harvest. Last year’s harvest was poor due to poor weather, and government mandating the planting of cultures with which they were not familiar. They can’t make until the next harvest on what they currently have. They ask for some additional tents to use for the Feast of Tabernacles. And they asked if we could reduce the number of letters of recommendation required from school administrators needed to receive FOI scholarships. Some high-school and even university teachers and administrators have applied pressure on the parents to grease their palms in some way before they’ll give the letters. Some said they wanted access to the scholarships for their own children before they’d give a letter. The way of the world. 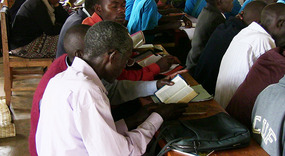 Studying the word
I promised some assistance to buy food and asked them to give detailed estimates on how much the other items would cost and we’ll do what is needful. I’ll have to look in to the letters of recommendation.

Then they had Bible questions:

1.      Matthew 23:1-2 talks about Pharisees sitting in the seat of Moses. Are there still Pharisees today? I explained some background about the Pharisees, and then some about different groups among modern Jews: some are unreligious, some practice slightly, some more devoutly and I explained what I knew about Orthodox Jews. But, I told them, to my knowledge there is no group today that calls itself the Pharisees. 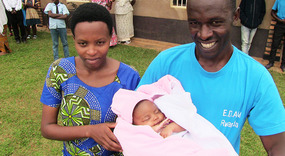 Sangwa Dolly with proud parents
2.      What does Romans 14:14 mean? "Nothing is unclean of itself?"  I explained that a major issue in the New Testament church was meat sacrificed before idols. Much meat found in the market stalls had served in a pagan service. The animal was sacrificed and the meat divided, some burned as an offering, some given to the priest and some to the offeror. If the priest didn’t use his he could sell it to a butcher that would put it on the market.

This is the same issue Paul confronted in 1 Corinthians 8. Comparing the first 8 or 9 verses of this chapter with Romans 14 clarifies the issue. The question was not clean and unclean meats, it was whether an animal killed before an idol became spiritually contaminated and to eat it would be idolatry. Paul explained that eating such meat was not idolatry, but that church members needed to be careful of each other’s consciences. 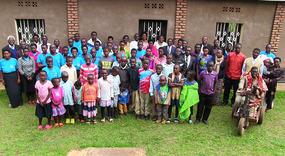 Group portrait
3.      What does Matthew 19:3-6, 9 mean? Some churches in the world are against divorce, some are for it. What do we teach? I explained that we teach what the Bible teaches: God hates divorce, but it is allowed in cases of gross immorality, which is what Jesus said in this passage. I explained that a marriage could be (but is not required to be) annulled if fraud is discovered, but that’s not really divorce because a marriage cannot be legally established on lies. In that case there never was a legal marriage. I explained that annulments must happen as soon as the fraud is discovered. They laughed when I said “you can’t wait 20 years and then say 'hey you lied to me 20 years ago, I want an annulment!’”

And I explained what Paul taught in 1 Corinthians 7:12-16 about unbelieving mates and how they should be treated, and what happens if they refuse to continue to dwell with the believer.

These questions led to many others. We spent half an hour on this question and those spawned by it.
Answer: Circumstances will differ, but it can be considered “doing good on the Sabbath” (Matthew 12:12) to attend close family weddings.
Answer: We can only do so much. Advise if they want advice; otherwise pray for God’s involvement for them to learn lessons. 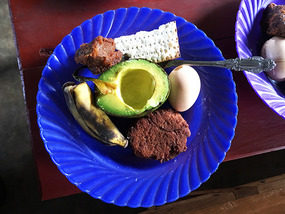 A lunch dish
Answer: Paul explained that we are to marry in the Lord (1 Corinthians 7:39), this means among fellow believers. We can all pray for God to supply believing mates for our children. God calls people. We should have faith that He’ll do what’s best for those who trust Him. Parents need to teach the importance of this to their children. We encourage young people to wait to get married until after they’re baptized because God’s Spirit helps us see and discern more clearly, and have right priorities in place.

And there were more. Finally about 2:30 we broke to let the ladies prepare the meal. I contributed a box of matzo and a box of Triscuits which they found quite intriguing.

We enjoyed the meal together and talked of many things: the world scene, politics in the US and in Rwanda, the progress Rwanda has made in 23 years, what the future may hold, developments in Europe, what Vladimir Putin is up to, terrorism in Europe and the US, and the relative merits of different kinds of unleavened bread. We talked until about 4:30 when I said I wished to start back to Kigali. I much prefer to be in town by nightfall for reasons I’ve already given, and Mr. Mundeli agreed it would be wise. 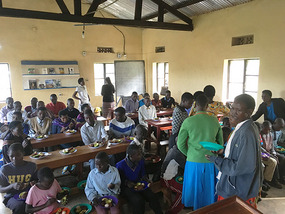 A feast for a Feast
So I said goodbye to everyone shook lots of hands. One little girl in a pink dress, probably four years old kept coming back to shake my hand again. We probably touched hands 10 times before I got to the vehicle. The discussion of the Q&A continued on the way down. One lady in my vehicle has an unconverted mate and she shared how hard it has been and how young people don’t know what they don’t know. I fully agreed.

We dropped people off gradually as we drove through Kigali, at one point we were stuck in traffic which is heavier and heavier in Kigali. In front of us was a nice sedan and in front of that an immobile truck, waiting to turn onto a busy street. We all had our windows down including the driver in front of us. As we sat and waited with the rest of the vehicles we witnessed an attempted theft right in front of us.

A two-man team moved in, one walked to the driver’s side and said something to the driver, distracting him. The accomplice walked up on the passenger side and snatched something from the car, an expensive cell phone it looked like to me and ran into a thin crowd. The driver yelled and jumped out of his car in pursuit of one of them. His car was in neutral, and as he left, the car rolled forward slowly until it hit the truck in front it. As soon as the driver yelled, he was heard and men in the crowd grabbed the two thieves, who had gone different directions, and brought them together holding them tightly. Several men slapped and punched them on the face and head. At one point they were down on the ground and got a few kicks as well. Finally calmer heads prevailed and they were stood up, I saw one was handed over to a uniformed security guard. There was yelling and much commotion, and about this time traffic thinned out enough for us to move on.

Only Dieudonné and Ndio were still with me when we reached the hotel. I paid Ndio and said goodbye to Dieudonné until tomorrow when we’ll meet again.

About 7:00 pm I had a bowl of mushroom soup for dinner and will turn in early. It’s fair to say I’m tired.
Other Entries
-

Wow, I'm so glad that robbery attempt didn't end in something worse. We pray for your protection on these trips and are reminded by this incident how important it is for us to do so!

Hello my friend, Thanks for your dedication to God and the brethren in these far-flung areas! Who would have guessed that matzo and Triscuits would be so intriguing!

Once again, thank you for your blog, the great pictures and for the incite into our brethren's lives. I wish I had known how to carry a baby on my back when my children were small. It looks so much more comfortable than the baby carrier I had. I loved the story about the little girl in the pink dress. May God bless the rest of your trip.

Thanks for the pictures of the brethren and little Sangwa Dolly. How happy for everyone to see the blessing of the new little one. The questions and comments about world affairs are always interesting. Can't imagine witnessing such a bold theft, and then to see the thieves captured and brought to justice.