Last day in Rwanda and travel to RSA

-
I slept well during the night, the mosquito net over my bed meant I was not troubled by those dangerous insects. I was up and had eaten breakfast by 09:00 when Mr. Mundeli arrived with Mme Burumé who had traveled from Bukavu, just over the border in the DRC (Congo). She came for the last feast day, but also to talk with me about the project of finishing her house. Her husband died unexpectedly a year ago, leaving her with eight children ranging in age from 27 to 10 years of age. The older two are out of the house, but she still has five or six at home for which she cares, and while trained as a teacher she had no job at present. 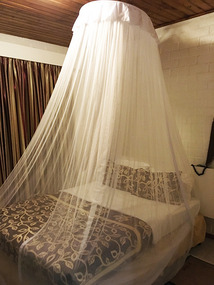 Mosquito net and bed at Chez Lando
The family house is on a sloped lot in Bukavu, where prices are very high. The house is currently of wood which is rotting in places, the family needs a safe and permanent home. The architect's proposal, was quite ambitious, too much so, two stories and very large, including two apartments that could be rented out for income. The house proposed was larger than those of most western members of the church with a cost far beyond any assistance we’ve ever given. Life is expensive in the eastern Congo, but for the amount requested we could build 10 or 15 of the houses that most of our African brethren have. So I gently explained that the architect had gone too far, and that we needed to be more realistic. A one-level house should suffice for her and the children she has, we could choose a plan where she could continue and expand the construction later if becomes possible for her.

So I suggested that Mr. Mundeli go back to the architect with more modest dimensions and ask for a more feasible and cost effective design. He will work on that. We gave her money for bus fare back to Bukavu (about $12) and she went to look for a moto-taxi to take her to the bus station. 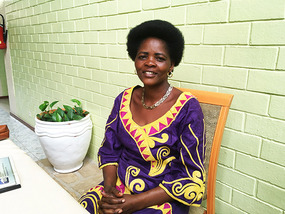 Mrs. Burumé
At 10:00 three people had arrived to continue counseling for baptism. We started our discussion about 10:30. This was their forth session, and we covered the last few things left to go over. I was happy to say, after an hour, that as far as I was concerned they were ready, and if they chose to be baptized, we would do so. They were very enthusiastic and grateful, as was I to be able to serve them in this way.

We gave them bus fare too and they started out for home. Mr. Mundeli and I went to the barbecue pit at Chez Lando for lunch. He had tilapia, while I had a beef brochette, and we talked for several hours. We talked about serving in this area, what’s going on in the greater church of God, and he had questions about how to better carry out his responsibilities. It was very helpful for us to have this time. At 2:00 pm I went to my room to work on answers to last week’s questions from my Daniel and Revelation class. I’m answering those as I travel, recording an audio file and e-mailing them to our Headquarters office to be included with each week’s class.

At 3:00 Mr. Mundeli came to the room to tell me that my last visit of the day would be half an hour late, at 3:30, and he wished to start for home. The last visit would be with someone who speaks French well enough that I would not need a translator. So I gave him money for the food assistance for the local members in need and for a few other local expense needs. He signed a receipt for me, for my accounting needs, and we shook hand and said until next time.

At 3:30 a young man arrived who hadn’t been able to come for the counseling session earlier. We talked about baptism for an hour, and I found he also was ready to be baptized, which I told him. We will soon have two new brothers and two sisters in the faith in Rwanda.

Around 4:30 we said goodbye, and I went to my room and recorded the answers to the class’s questions. I kept the room until 6:00 pm which allowed me to work, for which I paid the half-day room cost, not much at Chez Lando. At 6:00 I called the desk to ask for the shirt I was having laundered. My dress shirts I don’t wash myself, I have no easy means of ironing them which they need after being washed in a sink. The shirt came, still slightly damp but dry enough to travel. I organized my baggage again, and checked out of the hotel. Putting my suitcase and roll-aboard in storage, I went back to the barbecue pit and found a table near and electric plug. This allowed me time to have a bite of dinner and to continue working on my laptop. From there, I posted a few entries to my travel blog, and munched on a chicken pizza, which, to be honest wasn’t very good. They cook many things well at Chez Lando, the grilled meat is good. Their pizzas have never been stellar, but after the days of UB, I really felt like eating pizza!

At 8:00 pmI paid my tab, picked up my luggage took the shuttle bus I has reserved to the airport. They have a new security procedure now, probably based on the system in Nairobi which it resembles. One must now drive quite a ways past the airport terminal then make a U-turn and come to a drive-through security hangar. The vehicles are parked, four at a time and after off-loading all luggage and carry-ons, all drivers and passengers must exit and stand against a wall to one side. A dog is brought to sniff the luggage for explosives, and the vehicles are examined in detail, under the chassis with a big mirror, under the hood and in the trunk as well as inside. It reminded me of espionage films I had seen about the cold-war period when people would enter or leave the Soviet sphere, floodlights, uniformed soldiers, dogs, and searches.

When we were cleared we drove on, weaving through crash barriers and finally to the terminal. I thanked the driver and pulled my luggage up the hill to the terminal entrance to start the indignity of the check-in process. I’m dubious of the effectiveness of the measures taken. All terrorists will do will be to move their attacks farther out, wherever people bunch up. They could set off a bomb at the security checkpoint and still kill lots of people, which in fact about what happened at the Brussels Airport last year. But something must be done to give travelers the illusion of safety, so we must all submit to the indignity taking off some clothing and shoes, of emptying our bags, of being patted down, not once but multiple times during a single trip.

In Kigali for example before being allowed into the terminal there is a complete security check, electronics out, shoes and belts off, etc. Then after checking in, the entire identical process is repeated before being allowed into the departure zone. The same process is repeated within 10 minutes of each check. And if one transits through another airport, the whole indignity will be repeated yet again. End of rant.

In any event, we loaded the Rwandair 737 and made an on-time departure at 10:30 for the three-and-a-half hour flight to Johannesburg where we arrived close to 02:00. I was happy to have an empty seat next to me during the flight.

The only good thing about arriving at an hour like this was that there was no wait at the immigration desks. I was stamped right through and walked on to the luggage carousel where my bag popped out quickly. I had reserved a more expensive hotel that those I usually choose, because I wanted one in the airport zone I could get to quickly. My arrival here is very late (or early depending on how one wants to look at it) and my departure will be early too. So to have the chance to sleep more, I need to be close. Since it was part of the IHG group, of which I’m a spire member, they gave me a complimentary upgrade to a suite which was appreciated, although I won’t much appreciate it tonight. I’m going straight to bed.
Other Entries
-

Wonderful news that four people are ready for baptism. It must be a joy for them after completing all the preparation. We hope Mr. Mundeli is able to work with the architect to come up with more reasonable house plans for Mrs. Burume. Hope the rest of your trip is free of all the redundant security checks!