A pleasant day with longtime friends

-
This morning I slept until 9:30, which meant about 6 hours of sleep, had two cups of strong coffee and got organized for the day. At 11:00 I received a call informing me that Leon Walker and Morgen Kriedemann were waiting in the lobby as planned.

The Walkers are making a trip through southern Africa as part of his responsibilities as the International Liaison to the President. Leon Walker coordinates what happens outside the US on behalf of the Church. They happened to be traveling here while I was coming through, so it had been suggested that I arrange a day here to spend some time with these two couples who are long-time (I won't say old!) and respected friends.

I hadn’t seen Morgen, who is the pastor in Johannesburg as well as serving in multiple other capacities, or his wife Joleen in three years; it was a joy to do so. We drove through thick traffic on the highway between Johannesburg and Pretoria to the Kriedemanns’ home in a little gated community. Gated doesn’t necessarily mean upscale or expensive in South Africa it means being surrounded by a wall with some security measures in place. Crime is such an issue in South Africa that such precautions are a necessity and more and more people are moving to them. South African regularly places very highly on lists of the most crime-ridden nations in the world. By all normal standards, it is a very dangerous place to live. All of the church members I know here have either been victims of violent crime themselves or know someone close to them who has. So I was happy to see that they have moved to a safer place.

It was past noon by the time we arrived, so we almost immediately sat at the table on the patio. I gave Joleen a card Marjolaine had sent with me for her. They really enjoy one another’s company. The weather is perfect to be outside, blue sky and temperatures in the low 70s° F (22-23° C). Mrs. Kriedemann had prepared a lovely lunch of fresh fruit, hot bread, several cheeses, cold salmon and meats, and duck-liver pâté (I suspect that was for me), and a choice of a lovely Chardonnay, or a Sauvignon Blanc. It was all delicious but the greatest joy was to spend time with great friends and talk about all sorts of things.

Where either of these couples is, there is always laughter, though we also talked about more serious things. We talked about our families, our histories of service in the Church, the situations when we started in the ministry, some challenges we had over the years including the trauma of changing associations, and the joys of surgery. We also talked about more lighthearted topics such as British television and film humor including Monte Python and Fawlty Towers, the Pink Panther movies (including some excellent imitations), and more. Rare are the occasions when many of our scattered pastors can meet and fellowship with peers in the ministry. Such times of fellowship are so very refreshing. 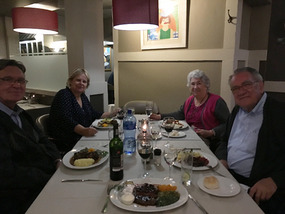 The Kriedemanns and the Walkers at dinner
We stayed at the table until after 3:00 pm. We agreed to take a break to rest and work, and to meet again at 6:00 to go out for dinner. The Walkers went back to their nearby guest lodge, and I opened my laptop on the patio table and worked for several hours before enjoying more conversation with the Kriedemanns.

A little before 6:00 pm the three of us drove over to pick up the Walkers, then on to a family restaurant with a good reputation. The Dollar is very strong against the rand right now, almost 14 to 1, so prices look quite inexpensive to us. 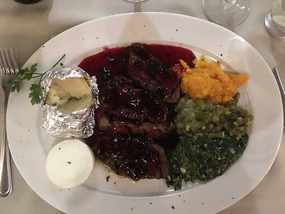 My kudu steak
Lamb is a favorite dish in South Africa, three of us ordered that. There was local game meat on the menu, so Mr. Walker ordered springbok, and I ordered kudu. Both the games dishes were served with a red or black current sauce (I couldn’t tell which), and mine was delicious! We enjoyed more conversation at the table talking about our work, the activities of the South African board, how things went in the separation of associations in the area, and more personal topics. Morgen ordered a very nice South African Merlot to accompany the meal; South Africa has some excellent wines, thanks to the French wars of religion. 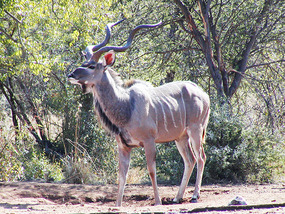 A male kudu (their horns often used as shofars)
When the French monarchy (always Catholic) cracked down on the Huguenots, as French Protestants were known, from the 1500 to the 1700s in France, many of them moved to friendlier regions of Europe, and took their Protestant work ethic with them. A significant number moved to South Africa where the historic wine estates of the Western Cape were founded. A few years ago near Cape Town, I had the chance to visit the Groot Costantia estate, which was founded in 1685. So after more than 300 years, the South Africans know something about producing very fine wines.

We topped the meal off with desert, they had very good crème brûlé, as good as one finds in France. There was also a mango Pavlova (a venerable meringue-based desert named for a Russian ballerina) which I was told was very good.

Around 8:00 we paid the bill and dropped the Walkers back at their guest lodge. We said “until soon” since I’ll see them at our ministerial conference next month. The Kriedemmans drove me back to the airport hotel, where we took our leave. They invited me to spend a Sabbath in Johannesburg, which I would love to do. Perhaps we can make a visit one summer when Marjolaine is with me. When I travel on my own, I tried not to be away any longer than necessary, and my primary responsibilities are to French congregations, so freeing up a Sabbath outside that zone is not easily organized.

Tomorrow I have an 08:40 flight from Joburg to Mauritius, my next destination.
Other Entries
-

Joel it is so interesting to 'travel with you.' Thanks for giving us such a complete view. You are in our prayers. All the best, Jack

Thanks for the update. Glad you had good visits and hope your stay in Martinique is lovely.