-
This morning I was up at 5:30, before dawn, so I could leave the hotel at 6:30 to check in for my 8:30 flight to Mauritius. I browsed through the shops in the terminal, which have some fascinating things for sale: zebra skins ($1000, thank you very much), pillows made out of springbok hide, beautifully painted ostrich egg shells, as well as the more mundane t-shirts, coffee mugs and key chains. 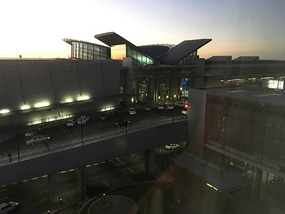 Joburg airport at dawn
With the dollars so strong at the moment, a few things were tempting, but as my daughters have told me, our house is already decorated like a museum, so I resisted the impulse to acquire any new exhibits.

The flight was on South African Airways, which is part of the Star Alliance group which includes United Airlines. I have no frequent flyer status with either of them; I'm just a faceless occasional passenger. So imagine my surprise when as I was boarding, while they scanned my boarding pass, there was a beep and a message on the screen: "seating error." The agents typed something in to find out what the error was, and I found to my delight that I had been upgraded to business class.I have no idea why, there’s really no reason for them to have done that. 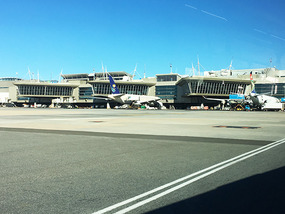 Taxiing to the runway
So thanks to those of you who’ve been praying for God’s blessing on this trip! This was a much appreciated perk. This was the first champagne breakfast I’ve had in decades. The seat was wide, the food excellent, and the service attentive. It was a delightful four hours. 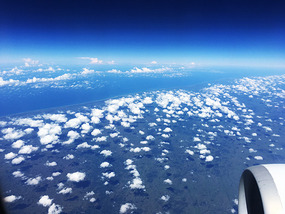 The east coast of Madagascar
There were some interesting low cloud formations over central and eastern Madagascar. And the arrival over the coast of Mauritius was beautifully fascinating as always.

This island is a paradise, and well-heeled tourists come from all over the world, although Mauritius attracts some of the less well-heeled compared to competitors like the Seychelles and the Maldives, which really only want very wealthy tourists to come: their prices show it. One can find five-star luxury in Mauritius, but also less expensive places. Once one gets here (which isn’t cheap since it’s so far away) costs are very reasonable. 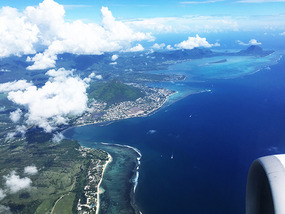 Crossing the coast of Mauritius
I arrived in Mauritius at 2:30 pm (14:30) and since I’d been upgraded, was allowed to use the premium line at immigration, which meant I sped quickly through. I picked up my tiny rental car and drove to the Holiday Inn with is visible from the airport. Because I stay with this chain fairly often, I normally receive a free upgrade with them and this time was no exception. I have a suite, with a view of the ocean in the distance.

I caught up on paper work during the rest of the afternoon, and decided not to go out for dinner; the fatigue is clear now. So I’ll make an early night of it, and try to catch up on my sleep.
Other Entries
-

So happy to hear about your update to business class! Hope you get some really needed rest now before starting your work in Mauritius. Keeping you in our prayers.

Good morning/evening/whatever it is! Been following your travels and just wanted to wish you a good conclusion to the trip and safe journey home in a few days. All is well here, and it's been encouraging to read about everyone in the places you've visited. And business class! One of life's little blessings. Have a good Sabbath and give our greetings to everyone you see.