A day of rest in Mauritius

-
Today I drove the half hour to the Prodigues' house in Rivière des Angilles (River of Eels), arriving at 10:00. I was glad to see that Jocelyn had regained more movement, but concerned to see that the recovery from his stroke has been so slow. Of course it is often this way, but I can only imagine how frustrating it must be.

We chatted and caught up on news for half an hour, during which the two other members arrived. So we were five for the service that started at 10:30. We sang hymns in English, because they all understand English and the English hymnals are printed. We’re still working on our French hymnal, which is a very big project taking hundreds of hours. 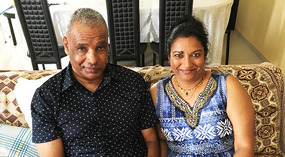 The Prodigues
After an opening prayer, I gave a news update about my trip and new from the office, then a sermon for an hour.

Following the service, Saloni set the table so we could enjoy a Mauritian meal: raw vegetable salad, curried fish, curried lamb, rice, and a pumpkin-like squash. We talked about many things, since I only visit once or twice a year we all look forward to conversing and catching up on news. We talked about events in Europe, how politics are turning more populist and extreme. We talked about the terror attacks in Europe and the US. They asked me about hunting deer in the US; there is a deer hunting season in Mauritius as well. Javan Rusa deer were imported from Indonesia in the early 1600s, and almost immediately some escaped their enclosure, so there is a wild deer population in some wilderness areas. There are also some private game reserves on the island where foreign hunters can bag a trophy. 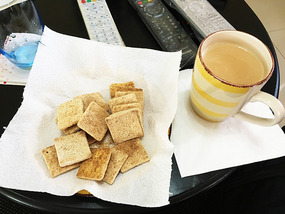 Cassava cookies and tea
We talked about Jocelyn’s health and his hopes for a speedier recovery. He has physical therapy to improve as much as possible. He can now stand on his own, which he could not do the last time I was here. 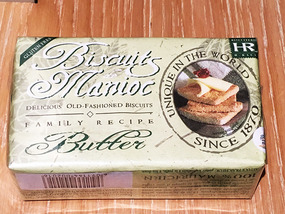 From the only cassava cookie factory in the world
After lunch we moved to the living room and continued talking. In the middle of the afternoon Saloni served tea with milk and a special local cookie made of cassava (the root from which tapioca is made), often called in Africa manioc. The only cassava cookie factory in the world is located in Mahébourg. They kindly gave me a box to take home to Marjolaine. That will be in addition to the rusks (South African biscotti) that the Kriedemanns gave me for her.

Toward the end of the afternoon, I finally said goodbye for this trip and said I would keep them both in my prayers. Their situation is certainly challenging.

Tomorrow I will travel on to Reunion Island for my last visits on this trip.
Other Entries
-

Thanks for the picture of the Prodiques. We will remember his recovery in our prayers. Mauritius has deer unknown to us here and also the only factory that makes cassava root cookies. I noticed the box listed "Butter" in big writing, so the cookies are bound to be good! Looking forward to your blog about Reunion.