-
This morning I woke with a scratchy throat, not unusual for me as I get to the end of a trip like this. The fatigue builds up over several weeks. I checked out of the hotel at 7:45, loaded my bags in the tiny rental car and drove to the airport a few minutes away. I was able to use the premium lanes for immigration and security, so things went quickly.

I had an Air France ticket, but the flight was operated by Air Mauritius in a little ATR 72. These Franco-Italian turbo-props have their doors at the rear of the place instead of the front, and have two seats on each side usually no premium cabin. I supposed for loading purposes, the company bunched us all at the very front and the very back of the plane. My seat was right by the prop. If the prop broke off, which is very rare but does happen, Marjolaine would be collecting insurance. Not really anything to worry about, but it's hard not to at least think about it. 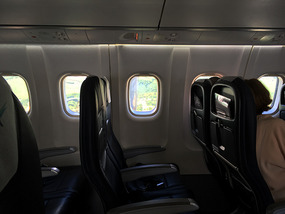 Final approach in the ATR 72
We arrived in Reunion after 45 minutes and I was surprised at how quickly the agents got us through immigration. Usually they ask me some questions, but not today. They didn’t say a word to me, just scanned by passport and stamped it. At first the agents stamped it with the wrong date, so he had to put a cross through the stamp, reset the date and stamp it again. Perhaps they were absent minded because today is the first round of the presidential election, and France is all aquiver, this will be the most unpredictable election in a long time. The two major parties, right and left, that usually confront each other may not even advance to the second round. And what will happen with Marine Le Pen?

In any event, Mr. Prodigue was waiting for me outside. We loaded my bags and drove the short way to the Tulip Inn in Sainte-Clotilde, not far from where the Prodigues live. I checked in, dropped my luggage in the room, locked the sliding door to the little balcony facing the Indian Ocean and went back to the ground floor. We drove up the hillside to their home, and sat and talked for an hour in their living room, catching up on all our news. 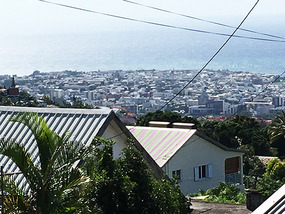 The view of Saint Denis from the Prodique home
At noon we had a very nice lunch, typical of Reunion, except with more meat. We had a salad of lettuce, tomato and pineapple for the first course, then steak, rice and beans which are poured over the rice as a sort of sauce, and a very nice French Merlot. We took our time to enjoy the meal and conversation.

After the main course, there was a selection of cheeses after which we moved outside to sit in the shade a large tree and catch the breeze. Ice cream was served for desert and an hour after that strong coffee. In the garden they showed me some vanilla pods growing on a vine climbing a tree. The vanilla plant is actually a species of orchid that originated in Mexico (vanilla means little pod in Spanish). At first it couldn’t be grown outside of Mexico because it relied on a particular local pollinator. But eventually, here on Reunion, it was discovered that the plant can be hand pollinated, so now vanilla be grown in many tropical areas. 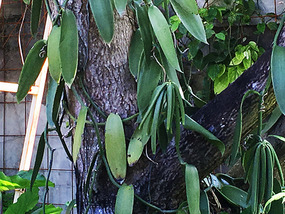 Vanilla pods
As we sat next to their little garden I saw that their tortoise had really grown since my last visit. It just showed up one day, they don’t know from where, and they adopted it. It’s become an amusing pet. It was time for its (they don’t know if it’s male or female, which can be rather hard to determine with a tortoise) feeding approaching the tray, and doing a few laps around a patch of greenery to attract attention. Mr. Prodigue cut up some cucumber, the favored dish, and placed in on the tray, where the tortoise dug in with gusto. 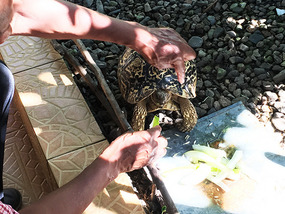 The tortoise and the cucumber
Tortoises are protected on the island now, and one this size could be worth as much as $600. I was told there has been a wave of tortoise theft of late because they’re so prized. Crime in general is rising at a very concerning rate. I was warned not to leave my hotel at night. Young thieves are operating with impunity, because the laws governing them are so lax. They know they can get away with almost everything in the juvenile justice system, so they do.

We continued talking about the work of the church, the upcoming Feast of Tabernacles, our families, especially their new grandbaby, life on Reunion as compared with Mauritius, air travel, French politics, and many more topics. Since they only usually receive a visit once a year, they have lots of conversation stored up. We don’t lack for things to discuss.

Finally about 5:00 I was driven back to the hotel. They offered me dinner, of course, the lunch had been so copious, I didn’t need another meal,

We’ll meet again tomorrow for lunch and to spend more time together, I’ll get some more office work done tonight and in the morning.
Other Entries
-

Thanks for the interesting update on the Prodiques. It would be interesting to hear how life differs on Mauritius and Reunion, also if the Prodiques process their vanilla. Quite enjoyable to read about such a relaxed and pleasant meal with tortoise entertainment.