A visit and a baby

-
Today was a deadline day for some office work, so I worked in my room all morning, not quite getting everything done. Mr. Prodigue picked me up at noon for lunch and asked if I would mind eating at McDonalds. He said his wife doesn't like that food, so he only goes there when she can’t join him (Marjolaine is grimacing a smile right now – she completely understands). I agreed and we drove to a nearby shopping center where there was a food court, and I ordered a Big Mac, fries and mineral water. The burger tasted just like it does everywhere else in the world. The difference here in the overseas department of France, is that a Mac meal costs about $9.00, and that’s only because the dollar is really strong at the moment. 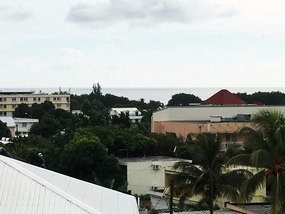 The view from my hotel room
We chatted as we ate, about how well we slept, and the fact the a man who had requested a visit, but cancelled at the last minute two trips ago, was still in touch and wanted to meet to ask some questions. He had said on the phone that he would come north from where he lives in the south of the island and meet me around 4:00 pm. I agreed.

After lunch I went back to the hotel to continue working. I was able to complete the work under deadline and was ready when Mr. Prodigue called at 3:30 to say he was on his way. We met the visitor at the shopping center and then drove to my hotel where we sat at a table on the back pool terrace. The man spoke French leavened with Creole, but not so much that I couldn’t understand. When I’m in Mauritius and to a lesser extent Reunion, I try to listen to Creole stations on the radio to familiarize myself with it. The two Creoles are not the same, in fact most French based Creoles around the world all have their particularities, to the point they’re not always comprehensible among themselves. Here in Reunion for example instead of saying "je" as the first person singular pronoun (“I”), people often say “mi” which is pronounced like the English “me”. It sounded to me like he was mixing English in with French and Creole, but it was easily comprehensible.

He’d been listening to sermons on our old website, understood about the commandments including the fourth, and about the annual festivals. He was trying to get his life turned around after a spate of difficulties. He m told me about his religious path, and how we came to us.

I went to my room and got my laptop out of the safe, brought it down and we waited while it booted up. I showed him our new member website where we now have sermons in video format at well as our French version of Life Hope and Truth. I showed him how he could find answers to many Bible questions. I showed him how to send a question in for a personal answer if he couldn’t find a prepared answer on the site. He was quite happy to see all that was available. I told him that I come through Reunion at least once a year and that I’d be happy to meet him again if he wished. 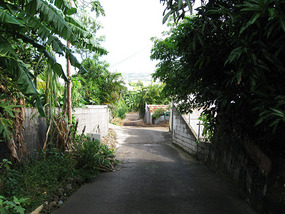 The steep street where the Prodigues live
The visit lasted about an hour after which we shook hands and he drove home and Laval and I drove to their home. Actually we drove to Patricia’s place of work, a kindergarten where she is a teacher’s aid for 4-5 year olds. She was just returning from a field-trip where the children had been bused to an aquarium. She felt harassed. The buses had been hour late, which threw the carefully timed schedule into disarray. Snacks were late, so the children were hungry, bathroom breaks took forever and they were returning late. She was happy that part of her day was over. 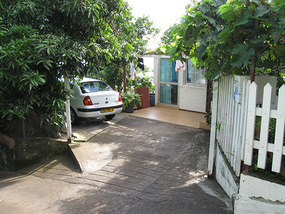 The entrance to their home
We three drove the short distance to their house, where shortly thereafter their son and daughter-in-law and their new baby Ruben arrived. We sat and talked about all things baby related for an hour. They knew about the blessing of the little children and asked me to pray for Ruben, which I was happy to do. It was a pleasure to see the joy in this family over the arrival of this new member. The grandparents seemed even more excited than the parents. 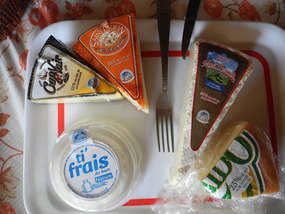 Locally produced cheeses
About 7:00 pm we had dinner together: beef, chicken and fish with rice and salad, followed by a several cheeses and ice cream for desert. It was delicious and the conversation varied and enjoyable. About 9:00 the new parents said they needed to go home, and I asked Laval to drop me off as well. So we shook hands all around and said until tomorrow – we’re going to stop by to see their new house – and we went our separate ways.

Tomorrow I will have most of the day on the island and will start the long trip home tomorrow night.
Other Entries
-

Had to smile at Mr. Prodique's desire for a big Mac. It is encouraging that you met with someone learning about God's way and that he has access to French material online. Lovely to think about the blessing of another little child and the happiness that everyone shared on the occasion.

Thank you so very much Mr. Meeker :-) Loved being allowed to accompany you on this trip :-) It sometimes seems as though I have actually been there with you :-) Please have a safe journey home and tell Marjolaine the Lofty's say Hi!! May they upgrade you many times over &lt;3 THANKS AGAIN!!!!