-
Marjolaine and I have started a rather unusual pastoral trip, at least for us. If we count the days going and coming, we will be on the road a day less than two weeks long, with our itinerary including Athens, Paris and Moscow (that’s not Georgia, Texas and Idaho by the way….)
We had planned to visit Dimitri in Athens when we came through in June with our first French Young Adult Educational Project. Sadly he was too sick to receive us during the week we were in Greece.
We had also planned to visit the Irions, a church family living in Moscow, where Hervé works as US embassy personnel. I had already purchased the tickets from Paris, but that visit had to be rescheduled because of delays in obtaining visas from the Russian Federation. Last month in July, I found Delta tickets online for $430 round trip from Dallas to Paris, which meant we could reschedule our visits economically, which we did. And whenever I pass through Paris, I try, whenever possible to schedule a Sabbath service. That’s the overview. I plan to give more details as we go along.
Yesterday afternoon (Tuesday) I worked half a day in the office before Marjolaine and I faced the Dallas traffic on the way to the airport. Our Uber driver was originally from Bangladesh, though he’s lived in the Dallas area for nearly thirty years. He had an interesting story to tell, and we shared a few of ours about that region, so the conversation was pleasant. I’ve not traveled to Bangladesh, but have been in India and Myanmar (Burma).
A strange flight schedule confronted us in Dallas. Normally I’m at least eligible for an upgrade on domestic Delta flights. I don’t always receive one, but am eligible. I expected to see my name on the wait list to Atlanta, but I was told I was ineligible because even though we changed planes in Atlanta, the same flight number was carried through on both flights. That made the flight from Dallas to Atlanta, I was told in all seriousness, an international flight. “It’s complicated” explained the agent. Oh well.
The flight to Atlanta was on time, and so was the ongoing flight to Paris. We slept about three or four hours. On arrival in the city of lights we had to clear immigration to enter the Schengen zone. The French passport control agent, flipped through my thick passport and came to two side-by side pink and green visas. He asked me in French, “What is that?” I looked at the visas and said “they’re from Burundi.” He replied with a frown “Huh! I’ve never seen that before.” He kindly looked for an empty spot on an almost-entirely used page where he could put his stamp. Frequent travelers I know like to, I was going to say save, but it’s closer to hoard, blank space in their passports so they don’t have to be changed so often. Anyway it was a conscientious attention on his part, which I don’t always receive.
We then collected our bags and walked by the customs agents, who did not stop us. We caught the little train from the newer Terminal 2 to the 50 year-old Terminal 1. When walking we took it slow, since I’ve been dealing with sciatica for almost six weeks. The pain has receded when I’m seated, but standing and walking are still painful, so I’m slow.
I had already checked us in with the Aegean Airways app, so around the ticket counter, we just had to print our luggage tags, attach them and drop our bags. We floated up what used to seem to be a very futuristic conveyor belt, running through a human-sized glass tube to the air level, took another, longer, spoke-like tunnel without windows, projecting from the central hub of the airport to the satellite gate areas. Then we sat for two hours until boarding began.
The flight was very full; I was thankful we were seated toward the front. Bright sunshine shown in through the windows, but Marjolaine and I sometimes struggled to stay awake and sometimes didn’t bother. 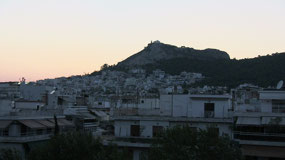 Athens at dusk
As we landed in Athens, the pink blush of dusk was on the horizon, the slow approach over the Aegean Sea was lovely. I’m a bit of a history nerd, so at such times, thoughts flood about events (mythic or historic) that occurred: the Amazons attacking Athens, Xerxes invasion and Salamis, the exhausting Peloponnesian war, some remnants of which are still visible, Socrates, Plato, Aristotle , the Roman invasion under Sulla, the Apostle Paul’s visit and defense, the Medieval (French) Duchy of Athens during the Crusades, the Ottoman occupation during which the Parthenon was blown up when used as a powder magazine, The war of Independence against the Ottomans when the British Romantic poet George Gordon Byron fought and died of fever, the German invasion and occupation during WW2, and on and on. Athens and Greece are perhaps the most ancient of places in Western Civilization.
Since we had entered the Schengen zone in France, there were no formalities on arrival, we simply picked up our luggage and went to the taxi line. Twenty minutes later we arrived at the hotel, halfway between the airport and the city center. I paid the taxi and we walked inside, where we found I had booked the wrong dates by a day. I had mistakenly booked from Thursday to Saturday instead of Wednesday to Friday. Happily, they had a room for us and made the change without difficulty.
Now after some 26 hours of travel with little rest, we shall, I trust, sleep well.
Other Entries
- 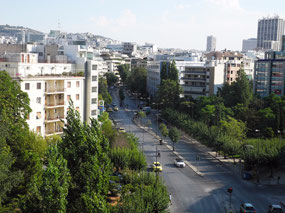 We're happy to hear you arrived safely in Athens and hope the entire trip goes well.

FYI, Texas has all three cities--Athens, Paris, Moscow (probably better referred to as "towns," maybe even "villages"). Have a great trip and safe travels.

Hello Mr and Mrs Meeker, Delighted to be along for another one of your exciting trips. Glad to hear you will see the Irions. We wondered with the recent dismissals, if they would be able to stay. Wishing you a wonderful trip.

Love your travel blogs and brief history lessons. Have safe and profitable trip.

What a nice trip and beautiful arrival at dusk. Thanks for the photos and historical comments.

Praying for a safe and "profitable" trip!

Hello from PA! Glad all is going so well with the trip. BTW - PA has cities of Athens, Dallas and Moscow too! Enjoy your trip.

Appreciate your service and identify with the rigors of travel. Assure all the brethren we are with them in spirit; helped by your travel updates.

We just watched your sermon on THE GOLDEN RULE. We wanted to tell you that it was the very best sermon we have heard out of hundreds since the early 60's and it is much appreciated. Thanks to both of you for your service and sacrifices over the years and please be safe in your travels,