A day in Athens

-
Yesterday we slept in as long as we could. Going almost two days with three or four hours sleep takes a toll and we’re not as young as we used to be…. 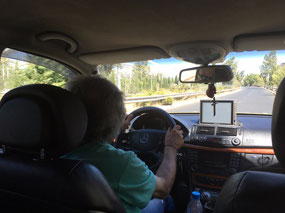 Spiros drive us
At noon a taxi driven by Spiros was waiting. He‘s like many Greeks we’ve met, friendly, relaxed, stubble, Albert Einstein hair, and speaks no English, but no matter. He drove us to Dimitri’s apartment, passing along the way the Olympic Games sports complex which served the Athens Olympic Games in 2004. The stadiums are quite impressive and are in regular use still.
Dimitri was waiting for us outside his apartment building and welcomed me with a hug, and Marjolaine with a kiss on both cheeks à la française. We went up to his second floor apartment where the table was fully set and loaded with food. We decided to dine right away while the food was hot.  He served us lamb sausages, three different pastries filled with spinach, chicken, and feta (in Greek respectively spanakopita, kotopica and tiropita), Greek salad and a rich red wine, all of which he has made himself. He told us he’d been at it since 05:00!
The food was delicious and the conversation very interesting. We talked about our history in the Church and our path to COGWA. Elders from other associations have attempted to “recruit” the brothers, but he told us, he feels this is where God wants him to be. 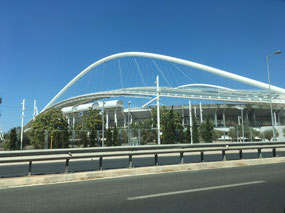 An Olympic stadium
We talked about his father, who began his career in the Greek navy in 1909! He served on several ships through at least four wars: the Greek war against Ottoman Turkey, the Balkan War, WW1 and WW2. Dimitri had several colorful stories to tell about his father’s career and he showed us his ID card from the time he served as an intelligence agent in Alexandria, Egypt in the post WW2 years.
We also talked about the English translation of several passages in the New Testament, notably John 21:15-17 where Jesus asked Peter if he loved Him, and different Greek words for love are used. We talked about the different meanings of filia (brotherly love strong enough that one is willing to die for the one loved) and agape (the highest of all loves). We also discussed Revelation 3:8-10, specifically what kept my word, and kept the word of my patience mean. The verb keep, tireo, he explained, means to be careful, to guard, to watch, to supervise, to have under supervision, to be watchful.
The word translated patience, ipomoni, he told us, means to stay under pressure, to stay under a yoke, to stay under a burden, to have durability, to tolerate, to persevere, to submit, to subject, to suffer judgement, to dare to act. 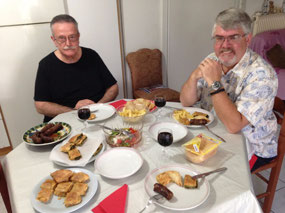 Dimitri and a home made lunch
It was quite interesting to hear the perspective of a native speaker of Greek, and to deepen our understanding of these passages. Dimitri said church members have sometimes asked him to explain passages of the Bible, to which he replied that explaining was not his role, it was for the ministry, what he could do was to translate. And that was what he was doing for us.
It was an enriching afternoon in many ways and most enjoyable.
We finally had to say goodbye, so Dimitri called Spiros again who arrived a quarter of an hour later. We hugged and kissed Dimitri once again and said until next time. We hope to be able to visit again next year, if that will be possible. Airfares are low now between European cities, which makes such visits easier to arrange. Before we left, Dimitri gave us some of his delicious pastries to take with us for dinner, and then we traveled the short, but confusing way back to our hotel.
Tomorrow morning we will head back to Paris for the weekend.
Other Entries
-

What a delightful - and yummy - visit! It was a great opportunity to hear the translations from Greek and I hope he know how he's enlightened all those who read your blog also! Safe travels and hugs for Marjolaine!

Thank you for sharing your travel experiences with us. It is so enjoyable to see the photos both of the members and the areas you are experiencing.

Thanks so much for the informative commentary, and the pictures of Spiros and Dimitri. What a privilege to hear a discussion of the Greek words in the scriptures that are so appropriate for the times now. Dimitri's father must have had many sobering experiences in 4 wars.

Thanks for the interesting blogs - wish you could travel "all the time"! We see the world and our brothers and sisters through your blogs!!

What a delightful trip. Our friends will be visiting Paris next month. Visiting both Athens & Paris via your travel log is almost like being there! Can't wait to hear about Moscow.