-
This morning were still tired from the trip to Athens so we slept as long as we could. This is not a touristy part of Athens, so there was nothing but Greek to be heard in the breakfast room. This was an unusual trip to Greece because we will see nothing historical or tourist-oriented, we came only to see a Christian brother.
At 11:00 Spiros was ready and willing to take us to the airport. It took a little less than half an hour. The departure area was full of tourists, mostly it seemed from the UK, but not solely. There were many young families, with babies and toddlers among the passengers. The Airbus was quite full. We were seated in the next to last row. That’s a bit of a pain when disembarking, but on the plus side we were near the lavatories. 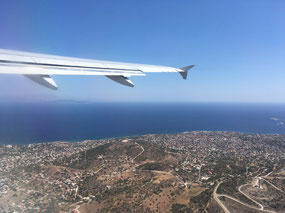 The general area of Marathon
During the three-hour flight I followed our progress on the flight map. Leaving Athens we flew over the general locations of the battlefields of Marathon, and Thermopylae, the latter where the 300 Spartans died resisting the Persian advance. We flew up the Italian boot, and then over the Alps. Snow still clung to the highest Alpine peaks as we crossed the area of the upscale Swiss ski resort of Gstaad, an area Marjolaine and I skied many times when we lived in Alsace. Our old friend, Bernard Andrist, was born in the small village of Rougement, very near Gstaad, and he invited us several times to stay in a chalet-hotel run by a cousin. 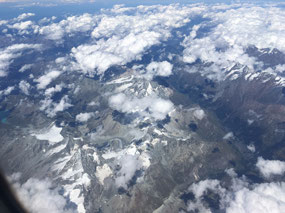 The still-snowyGstaad region in the Swiss Alps
Summers we would hike Alpine peaks and valleys, petting goats and being run off by cows (Swiss cows can be quite aggressive, they occasionally kill an inexperienced hiker if they feel a calf is threatened). Winters we would slalom down meadows of winter paradise. Those evenings we ate fondue or raclette and savored crisp white wines from Aigle, just south of Montreux, among other regions. Our best skiing was done in the lodges, of course, as we recounted our exploits after the fact, and laughed. There was an occasional sip of schnapps, and then deep, satisfied sleep. These memories and more flooded back as I looked down on a much-beloved part of these stunning mountains.
As we crossed Lake Geneva, I could see clearly at the eastern end, Vevey-Montreux, a combined lakeside town famous for the Chateau de Chillon – featured in literature by Lord Byron and Henry James, for Jean-Jacques Rousseau setting his hugely popular 18th century novel Julie there, for its modern world-famous jazz festival, for having been the home of Charley Chaplin and Freddie Mercury, for Deep Purple’s Smoke On The Water, and I’m probably missing more famously connected stuff. It is one of the most pleasant places I’ve ever seen in the world. If I were a millionaire I would eventually retire there. Actually if I were a millionaire, I’d retire several places simultaneously….
Finally landing in Paris, we collected our luggage and caught a taxi to, not a hotel this time, but an efficiency apartment. For less than the cost of a two-star hotel room, I reserved a one-room apartment (everything in one room except for the bathroom). This means we have a kitchenette and can eat out of a supermarket, by doing our own cooking. This saves a good bit of money. And it means we can choose a better location that we would with an inexpensive hotel room. In this case, I found an apartment about a block from the Louvre Museum, in the very heart of Paris. 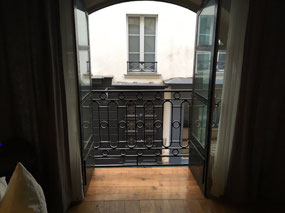 The view from our apartment balcony
The caretaker was still cleaning when we arrived, but soon enough we were inside and settling in. As is expected of a person in such a role, he told us where to find the best food, the grocery store with the best and freshest selection, the best cheese shop, the best bakery, the best wine specialist, and the best restaurants in the area. This is all much prized information. He was quite passionate about the information, eating well is one of the keys to an enjoyable life in France, and most French people are connoisseurs.  It must be admitted, the average French person knows much more about the pleasures of the table, and how to achieve them, than the average English person or American. 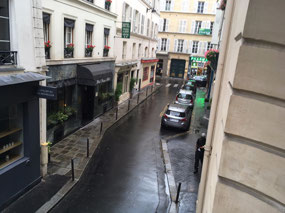 "Our" street in the 1st arrondissement of Paris
This is one reason why much of our cuisine-oriented vocabulary in English is actually borrowed from French (cuisine is French): menu, entrée (we use that one wrong, it actually means the first course), à la carte, à la mode, au jus, au gratin, demitasse, pièce de résistance, vinaigrette, omelet, sommelier, veal, beef, pork, mutton, petit four, soufflé, mille-feuille, croissant, pastry, gateau, baba au rhum, cream, caramel, fondant, fondue, marmalade, meringue, clafoutis, flognarde, beef bourguignon, cassoulet, casserole, confit, mustard, mayonnaise, sauce, pâté, foie gras, terrine, navarin, and I could go on. Maybe I will later on….
Having the whole apartment in one room means it’s a bit cramped by American standards, all the furniture is small, and fitting in the shower will, we know, be a challenge, but we’re used to that and make it work adequately.
We walked a block to a little supermarket and bought most of the provisions we will need for four days. We bought water (Paris water is safe but has an aftertaste) several raw vegetable salads, five Belgian endives (one of my very favorite salads, very light with a hint of bitterness), two small tomatoes, a premixed vinaigrette, four slices of smoked turkey, a camembert, two small goat cheeses (ecstasy in a nutshell), a still-warm baguette, a bottle of Côtes du Rhone (red), and one of Côtes de Provence (rosé, a particular favorite, we used to live there), instant coffee (no proper maker in the apartment), and a small bottle of milk (to make our morning café au lait). We smiled as we picked this all out, because we enjoy eating French cuisine, we have many favorite dishes, and it’s especially enjoyable doing so inexpensively.
Back in the apartment, Marjolaine started preparing dinner while I finished my Friday work, finalizing and sending off my weekly member letter and updating our French websites. Our dinner was light but a joy, we savored each aspect. Now I will finish the work on my sermon for tomorrow before turning in.
Other Entries
-

What a nice idea--renting a one room apartment near the Louvre, cooking great French food at a fraction of the cost. Looking forward to hearing about your experiences in Paris.

So glad Mrs. Meeker is with you on this journey. Thanks for sharing the trip with us as well.

We love you both. Thank you for sharing the joys and emotions of this trip. We will pray for your health.

Aw, Paris, a place I would love to enjoy. You bring me the reality of the food, the sites, the people, all with the wonderful news of our brethren there. May you travel safely!