-
Today was a travel day. We finished our preparations and most of what was left in the refrigerator, and gave at least a cursory clean to the apartment. We didn’t really have to do that, but it wasn’t difficult. 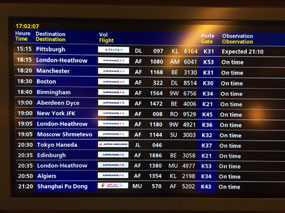 Flights departing CDG
Mid-afternoon we summoned a car and drove to Roissy Charles de-Gaulle. Check-in went smoothly so we soon found ourselves in the Air France lounge where we had a light bite while waiting for boarding time. The flight left and landed on time, so that meat reaching Sheremetyevo airport, one of three major airports serving Moscow, at 11:30 pm. I was rather surprised that formalities went quite quickly. Our visas were scanned, we were given our travel documents to sign and keep with our passports, and customs didn’t ask to look in our luggage. I’m not sure what I expected, but more than that.
Taxis don’t have a universally sterling reputation in Moscow, so I had arranged one through the hotel. The driver was waiting in the arrivals are with a sign bearing my names, and in a flash we were on the road. Traffic was thick for midnight, and the driving was erratic and aggressive, and I had involuntary flashes of action movies come to mind. 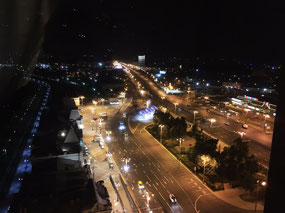 Night view of Moscow
We reached the Holiday Inn by around 12:30 and checked in, after showing all our papers. Since I stay fairly often with this chain we were given a free upgrade to a suite, which also gives us access to the club lounge, so free breakfast and beverages. Our room is on the 17th floor, so the traffic outside is stream of red and white light.
We’ll head for bed quickly this morning (!) because we want to use our time here as fully as possible. Tomorrow (or later today really) it will begin.
Other Entries
-

Glad that you made it safely to Moscow and that custom was easier than expected. Wow! Being in the middle of erratic and aggressive traffic must have been quite an experience! Hope you get some good rest before starting your day.

Glad you had a safe flight and pleasant check in. Looking forward to hearing about your time there.

Glad all travels went well. Generally worse than that in intra-US. Have great stay.