Touring Red Square and the Kremlin

-
This morning we rose fairly early, tired though we were, because we wanted to see as much of the Kremlin area as we could. We hadn’t really slept enough, but we didn’t want to waste part of the day.
Mid-morning we took a taxi to Red Square, which we found on arrival was set for a festival of some kind. There were high bleacher stands around the square and a number of marching bands were practicing. Based on poster all around it appears the festival will start Saturday, and international in scope. 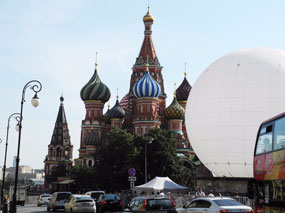 Saint Basil's Cathedral
We were fascinated to see Saint Basil’s Cathedral, one of the most recognizable churches in the world, with its brightly painted onion domes. It was built in the 1500s on orders of Ivan the Terrible (more on him anon), to celebrate his victory over the Kazan khanate, which allowed him to claim the title of Czar of all the Russias. It is now a museum which we entered right away, paying the 500 Ruble entry fee (about USD 8). The rooms inside are surprisingly very small, the icons, other decorations, and artifacts are impressive but not awe-inspiring in scale. Basil, or Vasyli in 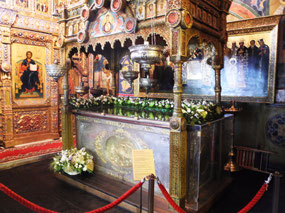 Basil's tomb
Russian, is buried in one of the first rooms one enters. He was an eccentric fellow who walked about naked, wore chains as a sort of penitence and told off Ivan the Terrible for his cruelty and his inattention during church services. Ivan came to revere him. 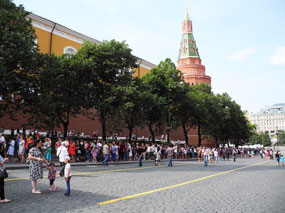 The line to see Lenin
Leaving Saint Basil’s we walked around Red Square, past the State Historical Museum, and went to the back of the line to see Lenin’s Mausoleum. The line was very long, stretching along the north-west to south east wall of the Kremlin (Kremlin means citadel and many Russian cities have one). It took an hour for us to reach the security checkpoint where we went through a metal detector and had our daypacks and messenger bags searched. Then we wandered along the Kremlin Wall Necropolis where Soviet dignitaries are buried including people like, Stalin, Kalinin, Dzerzhinsky, Brezhnev, Andropov, and the American Communist Bill Haywood (who, while appealing a violation of the espionage act, fled to Soviet Russia). 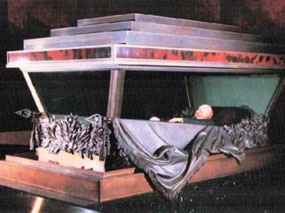 Inside the Mausoleum
Then we arrived a Lenin’s tomb, a large stone structure on top of which the Soviet Nomenklatura reviewed military and other parades. Those are iconic photos, engraved in the memories of those who remember the Cold War. I had read that we would have to store our bags and surrender our cell phones so that no photos could be taken, but we were simply warned loudly and sternly by a guard as we prepared to enter “No photos!” There were six or eight guards, one at each turn, so we were never out of sight, as we descended the stairs into darkness. We finally came to the body, which has been on display since he died in 1924, and looks just like the photos. Public opinion in Russia is that he should be buried like the others in the necropolis, but Mr. Putin has resisted the idea, as he is also actively rehabilitating the memory and reputation of Joseph Stalin.

Lenin
Pausing to reflect on Lenin’s life and the results of his efforts, we walked back out into the warm sunlight. We made our way slowly (I’m still nursing my sciatica) back down around the Kremlin wall, to the tomb of the unknown soldier, just outside the walls. We continued on to the ticket counters were I purchased tickets to the archeological exhibits within the Kremlin walls. Then we walked up and through the Trinity Tower Gate. It was memorable to enter the walls of the seat of power I’ve heard about, and in some ways feared since my childhood. 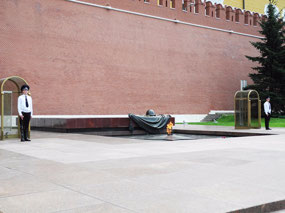 The Tomb of the Unknown Soldier
While security was obviously present, stern-looking policemen were blowing whistles liberally to keep people where they were supposed to be, there was nothing overtly threatening about the place. Bright sunshine and blue skies gave a sense of peace. Entering the western, Trinity, gate, all the buildings on one’s left are the seats of Russian Power: the Arsenal, the Senate building the Presidium and so on. 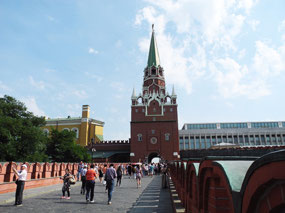 Entering the Kremlin
To the right are the ancient churches of the Russian monarchy: the Dormitian Cathedral, the Annunciation Cathedral and the Archangel Cathedral where Ivan the Terrible is buried. Terrible is the translation of a word which more properly means inspiring terror or awe, not in the sense of evil. 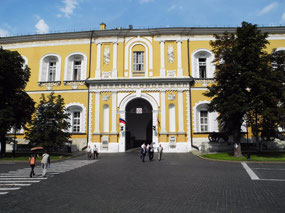 The Armory in the Kremlin
But if you read on him at all you will find he was often a terribly cruel and mentally unbalanced man in addition to what could be considered the actions on the positive side of the ledger. In violent times, violent men rule. 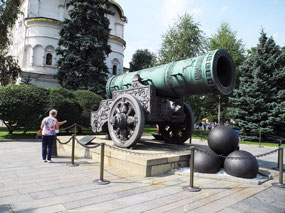 The Tsar Cannon
Back outside we saw the Czar Cannon, mean to awe and impress but not to be used. The giant cannon balls before it are too large to fit in the barrel. We also saw the Czar Bell, which was destroyed by fire before it ever sounded. 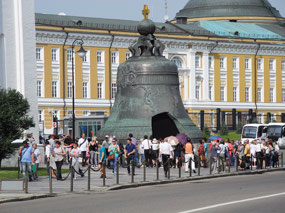 The Tsar Bell
We paused on the edge of the hill next to the Grand Kremlin Palace, built by the Czars and now the official residence of the President of the Russian Federation, though apparently seldom actually used for that purpose. Below we could see boat traffic on the Moskva River, and a beautiful view of the city. I hoped to exit directly back onto Red Square, but all the Kremlin gates were closed to tourist traffic except the one by which we had entered. 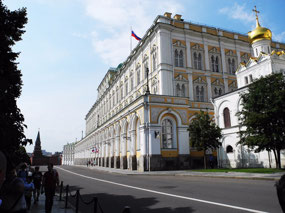 The Grand Palace
So we retraced our steps and walked around toward Red Square passing the recently-installed monument to the Romanov family as we went. We came to the equestrian statue of Marshall Zhukov, the great Russian General of WW2, and personal friend of General and President Eisenhower.
We made our way back to the GUM (acronym for Main Universal Store) department store, more like a mall now. Built in the 1890s is was famous under the Soviet system in the 1950s as the one store that didn’t have a shortage of consumer items. Lines of waiting shoppers sometimes stretched all the way across Red Square. 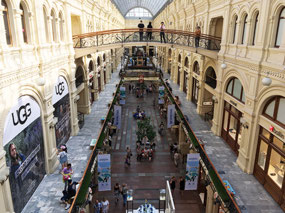 Lunch at GUM
We had a light lunch on an upper level passage between rows of shops, and browsed for souvenirs in what are probably the most expensive souvenir shops in Moscow…. Leaving empty handed, we caught a taxi back to our hotel, where we arrived at the end of the afternoon.
Hervé arrived a little before 7:00 pm and we caught up on our news. He and his family have been in Russia for 14 months on their first diplomatic posting, but have been downsized over the current diplomatic spat between the US and Russia. His work has been so demanding that they’ve really not had any time to sightsee other than around Moscow. He talked sadly about the soon-to-be-unemployed Russian embassy personnel who are being treated as traitors by the Russian government for innocuously working for the US State Department, and will probably find it impossible to find other work as a result.
Hervé and his family will leave the country early Sunday morning headed for the US for several weeks before moving on to their next posting in Germany.
We talked about the work of the Church too, and our present trip, but mostly about their challenging situation.
He left about 8:30 saying goodbye until tomorrow evening when they have invited us for dinner. We had a light dinner and prepared for the activities of tomorrow.
Other Entries
- 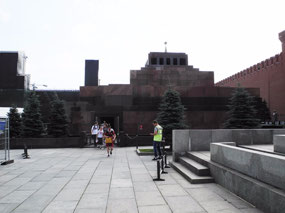 What an experience! I feel like I was right there with you both. Marvelous pictures and fantastic narrative. Thanks soooo much.

Hello my friend, Glad to to see this part of the trip going so well. Thanks for the extra info - I feel like I'm in a history class. Awesome!

Hi Joel and Marjolaine. Thanks for the awesome photos that give us a glimpse of Moscow. Lenin not buried--that's a powerful symbol. It explains the long lines. The size of the cannon and the bell send a message, too.