The Moscow Metro and a lovely dinner

-
This morning I worked a while to try to stay up to date with office work. About 11:30 we took a cab to the Kutafia Tower of the Kremlin. We wandered along the Manezhnaya Square, the large square named for the Moscow Manège (French word!) or indoor riding academy. The Soviets used it for art expositions and it was there that Khrushchev berated artists for promoting “degenerate art.” 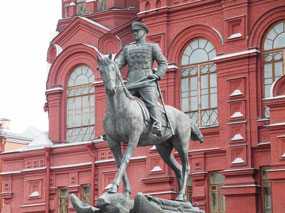 Marshal Zhukov
We found an Italian themed-cafeteria and had a light lunch, overlooking the former river-bed of the Neglinnaya River, now reduced to a surface trickle. The shallow bed is decorated with fountains and fairytale characters. It is a favorite cool place during summer heat. After lunch I had a closer look at the statue of Marshal Zhukov in a very heroic pose, and a closer look at the Romanovsky Obelisk, honoring the dynasty. It's near the Arsenal Tower, and the Ruins monument to the defeat of the French after the destruction of Moscow.  The original Romanovsly Obelisk was destroyed by the Bolsheviks, but a replica replaced it in 2013.  Farther down is a 2014 statue honoring Alexander I, the Czar who finally defeated Napoleon and his invasion of 1812. 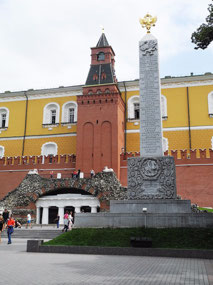 Romanov Obelisk, Arsenal Tower, and the Ruins
At 2:00 we met back at the Kutafia Tower to begin our 90 minute guided tour of the Moscow subway, which has some of the most ornate station decorations of all subways. Our guide was a cheerful young woman who spoke good English. Our tour group was composed of a young couple from Bulgaria, a family of three from Chicago, two older sisters from India, and a young Canadian woman.

In the Ploshchad Revolyutsii metro station
We paid our tickets and headed off down the stairs to a station right by the gardens we’d been exploring. I’ve used subways (aka metro systems) in a number of cities such as Paris, London, Prague, Brussels, Hong Kong, Berlin, Rome, Oslo, and Warsaw, but I couldn’t remember one with such deep tunnels. The guide told us the deepest is 86 meters (276 feet) underground. That’s all impressive, but there is a negative that impresses too. Almost all the signage is only in Russian and in Cyrillic text. 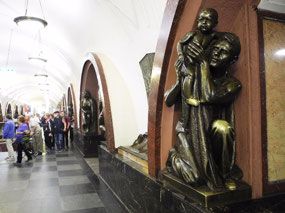 Communist hope at the Ploshchad Revolyutsii
Most metros systems have the local language and English indicated. I supposed the Russians have been slow to want to use a language seen as that of enemies, or at least adversaries. But it makes navigating the metro a chore, especially with a less than perfect grasp of Cyrillic (more on that in a bit). There now English along with Russian on the line maps inside the cards, but not in the stations themselves. They have put helpful exit arrows on the floor in stations (with the word exit), so at least we could find our way out, but not easily from one line to another. 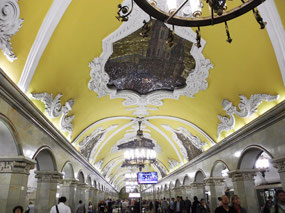 Komsomolskaya station: Russian freedom fight
The metro was a Soviet-era construction, the first line opened in 1935, so the stations promote communist ideology: union among the soviet republics, united workers improving the collective, fighting the great patriotic war against Nazi Germany, happy fulfilled children and so on. That said, the stations are truly beautiful. We visited about nine stations in 90 minutes taking trains on various lines from one to another, with time for explanation and photos. 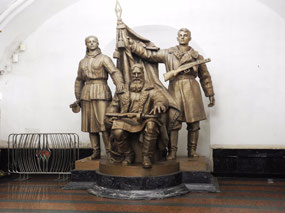 Partisans at the Belorusskaya station
Toward the end we had an adventure. The mother and son from Chicago and the Bulgarian man missed a turn following the guide and group and disappeared. The guide asked the rest of us to stay by a heroic statue of Belorussian partisans, while she went to look for them. The Chicagoan texted his missing family, Mrs. Bulgarian did the same. 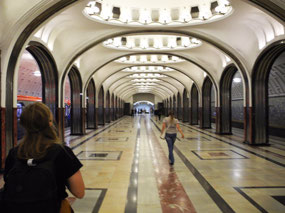 Mayakovskaya station
I suggested they photograph the statue near us and send the photo so the missing could show it to people to receive special directions (i.e. pointing). Compared to other European nations, very few Russians speak English. The guide was gone for a quarter of an hour. Text communication was established, but they couldn’t read the signage. And when they did finally arrive at the station, they still had to find us. 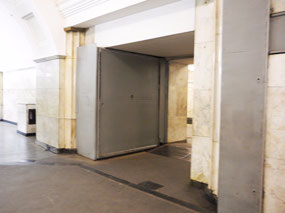 Blast doors at Mayakovskaya station
Finally they found their way back to us, and we continued on our way, visiting one more station, the Art-Deco Mayakovskaya, before the tour ended. The guide pointed out the huge blast doors around the station, a vestige of the cold war when it was planned for the metro stations to act as bomb shelters in the event of a nuclear or I suppose other) exchange with the West. Probably at the same time Americans were doing duck and cover drills. The extant metro stations in 1941 did serve as shelters when the Germans were bombing Moscow, just at the London tube stations served as shelters during the Battle of Britain, and the Berlin U-Bahn did the same when that city was pounded by bombs and artillery.
By the time the tour ended we needed to fight the traffic back to our hotel. There were taxis waiting, at the station where we emerged, so I went to the first in line and handed the driver the business card of our hotel. He handed me a laminated plastic card explaining that the fare was so much per kilometer, but in any case not less than 900 rubles. I had never paid that much, so I said nyet, spasiba, and walked away. Another taxi driver chased after me and said with a big smile “your price, your price!” I immediately gave him my, more than fair, price. The smile disappeared and he said no. So I changed my data setting to temporarily accept roaming (I have a block of data I can use abroad each month) and got on the Uber platform. Entering the destination, I received a price quote of under 400 rubles. Once I agreed a taxi appeared a few minutes later, and I would like to say sped us back to the hotel, but that would not be accurate in Moscow traffic.
While I’m on this topic, I’ve been amazed to see how inexpensive taxi fares are in Moscow. A 20-30 minute ride to/from the hotel is about $5-6. I’m now using the Uber app exclusively because it provides the driver with our destination (in Russian), I know in advance how much it will cost (up front pricing) and I don’t have to use cash, the charge goes on a card of my choosing.
Back at the hotel we quickly changed, bought a bottle of French wine at a nearby shop (located by Google maps) and we caught another taxi out to the beautiful Pokrovsky Hills area. This is an upscale, forested area where many diplomatic personnel are lodged alongside wealthy Russians. There is an excellent English language school very nearby, serving the children of diplomats, not all of whom use English as their home language. Many diplomats from other nations have their children attend such schools so that they can attain native proficiency in the language of Shakespeare. 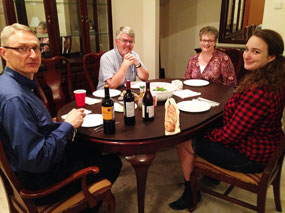 Lovely dinner with the Irions
We identified ourselves at the front gate of the community, and were allowed in to be dropped at the Irions’ townhouse. Mrs. Irion and her daughter gave us the grand tour of a very spacious townhome, although rather bare now. All their personal effects have already been shipped, only the basic furniture and other necessities belonging to the State Department that will remain after they leave are still there. Under such stressful circumstances, it was brave and hospitable of them to invite us for dinner. We laughed about not having a table cloth and having to use red party cups. I joked that I was OK with that, but please no beer pong (to be clear, I try to stay “culturally” aware, but I’ve never played that!).
We sat and talked about their situation, their upcoming move, the change in schools, the challenges they’ve encountered in Russian during the last 14 months. About an hour after we arrived Mr. Irion arrived. We moved fairly quickly to the table for a delicious meal: salad and French cheeses with baguette, followed by a choice of spaghetti or rice, with bolognaise sauce.
We talked travel in Europe, places they would like to visit and housing challenges. It appears their next posting will be Germany but no papers have yet been signed, so it could still be elsewhere. We talked about the possibility, actually probability that their phones, and perhaps home computers are bugged. Old KGB habits die hard. It’s possible even the house is bugged and our conversation might be under monitoring. Just in case, I stated, very enthusiastically, that I really loved the Russian Federation….
I told a few old Cold War jokes I remembered from our years in Europe. One of them was:
A reporter asks an American, a Soviet, a Pole and an Israeli: Excuse me, what is your opinion of the meat shortage?
The American asks: What’s “shortage”?
The Soviet asks:  What’s “opinion”?
The Pole asks: What’s “meat”?
The Israeli asks: What’s “Excuse me”? (No offense to our Israeli friends, this joke appeared in the Jerusalem Post!).
I must admit I got it a little wrong from memory!
Another, of which there are several versions:
An American finds himself in American hell, and sees the usual tortures — fire, brimstone, etc. A Soviet finds himself in Soviet hell, but doesn't see any fire or brimstone. In fact, it's rather level and grey. He sees a woman with a clipboard, and asks, "Where is all the fire and brimstone?" To which the woman replies, "My apologies, citizen, the brimstone has not been delivered yet."
In any event we talked and laughed about many things, and had I hope an encouraging and uplifting time for everyone.
We had ice cream for dessert and shortly thereafter it was time for us to leave. They have many things to do, and we didn’t want to keep them up too late.
We called a taxi and walked down to meet him at the gate. He spoke fairly good English, the first we’ve had with that level of proficiency. The drive back went smoothly and quickly.
Other Entries
-

Would love to visit Russia some day. But, you haven't lived until you have experienced the New York subway system!

I'm sure the Irions were delighted to see familiar faces in what has been a stressful reassignment...and I enjoyed your jokes! ;-)

So glad there was time to spend w/my friends, Herve & family. Your trips are inspiring & most interesting.

What an amazing metro system, like an art gallery, so clean and interesting. It sounds like Uber is the way to go, especially when you know upfront the costs. Glad you could visit the Irions, and it must be stressful and discouraging to them at the moment.