Moscow from the Moskva

-
This morning I worked, before we prepared to head into town. There was a chance of rain in the forecast but since the Armory museum (one more we want to see) in the Kremlin is closed on Thursdays, we decided to take a boat cruise on the Moskva River to see Moscow from the water. There were supposed to be incredible views of the Kremlin. 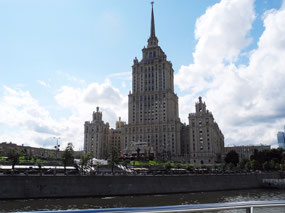 The Radisson Royal, one of the Seven Sisters
The Irions had told us too that leaving from the Ukrania Hotel (now the Radisson Royal) would allow us to visit a centerpiece of their lobby, a scale model of the Kremlin. So we caught a cab to the hotel, one of Moscow’s seven sisters, seven massive constructions built under Stalin’s orders in a very recognizable style called Stalin’s Empire. We recognized it from having seen Warsaw’s Palace of Culture and Science, which many Poles call Stalin’s curse. This was offered to Poland as a gift of the Soviet Union, but then when financial difficulties ensured, Stalin required repayment. Several times over: the gift that keeps on giving…. 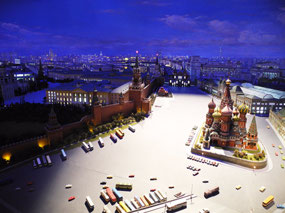 Scale Model of Red Square
The style is clunky (the Poles also call theirs the elephant in lace underpants), but it was obviously meant to impress through height and mass, which it does. We walked inside the impressive lobby and followed the signs to the model. It was truly well and beautifully done. Through headphones we followed a narrated presentation with lights identifying various structures, and mimicking sunrise, daytime, dusk and night when lights around the walls and on bridges over the river illuminated the scene.
The model was painstakingly built in the 1970s for a trade show in the US, where it was displayed for some months. At the end of the exposition, Neil Armstrong asked to buy it to put it on permanent display, to which offer he received the reply: Moscow is not for sale. 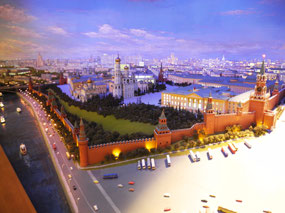 Scale model of the Moscow Kremlin
Marjolaine commented that she wished we had seen the model first before going to the Kremlin, because it would have helped us better understand the geography of the place. We’ll have to go back now.
At 12:30 we walked out of the hotel and to the boat landing where we bought tickets for the lunch cruise, a leisurely two and half hour trip to the Kremlin and back. We sat on the upper deck as far forward as we could go. When the boat cast off at 1:00 and we started down river, a brisk wind blew on us. Marjolaine put on both her sweaters and I put on my jacket, the first time I’ve had to wear it. Summer in Moscow can mean temperatures in the 80s or in the 50s F, not exactly like Dallas…. 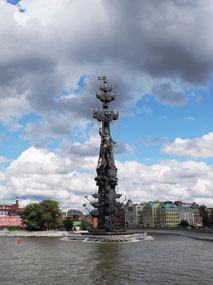 Statue of Peter the Great
We watched the buildings drift by, some obviously of Soviet origin, others pre-Revoluation, in the French style, still others more modern. We passed several wooded parks, among them Gorky Park, probably the most famous one in Moscow. As we approached the very heart of the city we passed the 300 foot tall statue honoring Peter the Great, who began the Russian Navy and moved the capital from Moscow to St Petersburg. The statue is not, in my opinion very beautiful, but it is big. It’s the eighth tallest statue in the world, and figures on various lists of the ugliest too. Big! 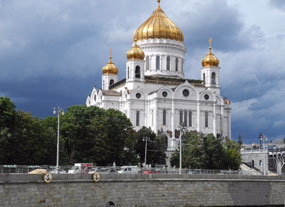 Cathedral of Christ the Savior (new edition)
Farther along we came to the golden-domed Cathedral of Christ the Savior, which was built to thank God for the Russian victory over Napoleon. It was here that Tchaikovsky’s 1812 Overture was performed for the 1st time in 1882. Of course Stalin had it torn down, in 1931. He didn’t want to thank God for anything. Stalin planned to construct a gigantic Palace of the Soviets in its place, to be taller than the Eiffel Tower. My building is bigger than your building! Construction began but was halted by the German invasion, when its materials were dismantled to be used to build and repair infrastructure. Construction never began again after the war.
In 1990 permission was given to the Russian Orthodox Church to rebuild the Cathedral which was completed in 2000. That same year the Romanovs were canonized. Boris Yeltsin lay in state here in 2007. This is where the feminist punk band Pussy Riot staged their guerrilla protest in 2012, aimed at the Church and Vladimir Putin. They were arrested and jailed before later being amnestied. 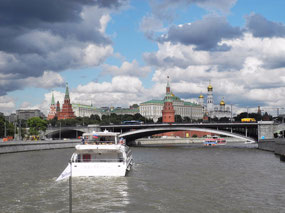 Arriving at the Kremlin
A short distance beyond we came to the walls of the Kremlin, which we enjoyed seeing from the water. The Grand Palace is most impressive, and later we had a fairly unobstructed view of Saint Basil’s. Just past the Kremlin as the boat turned about, we could see another of the Seven Sisters just head, the Kotelnicheskaya Embankment Building. Again, big and ostentatious! 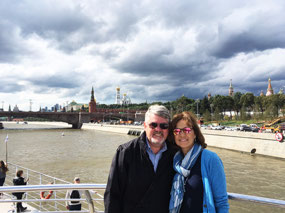 Portrait before the Kremlin complex
On the way back to the hotel I ordered some lunch: breast of duck with purée. Since the boats are run by the Radisson, I trusted the food would be excellent and it was, and because the dollar is very strong against the ruble right now, it was quite reasonably priced. 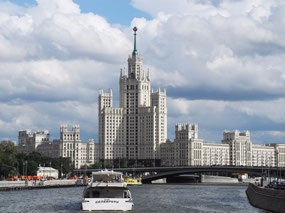 Kotelnicheskaya Embankment Building
We moved under cover to eat, which turned out to be good because rain came for a few minutes as I ate, and more people crowded under the roof.
Since we were going against the current on the return, the trip took half again as long, and we enjoyed the whole time.
As we disembarked back at the Radisson, we debated what to do next. It was 4:00 pm and drizzling. We could walk across a nearby bridge to the new Arbat quarter, centered on a pedestrian street, colorful and lively. But under rain? We decided to head back to the hotel so I could work and then we would make it an early night.
Other Entries
-

Delighted you are getting to enjoy this special trip together. So much history to absorb, I know you must be soaking it all in. So glad you could visit the Irions and for news on how they are doing. Looking forward to seeing you in Calais.

The model of the Kremlin looks impressive from your photo. I can understand why seeing it first would be helpful. The scale of buildings in your photos gives the impression of "bigness."