-
Welcome, or welcome back, to my travel blog! Another year, another January and another trip to francophone Africa have begun. This trip has already landed me in Côte d’Ivoire and will, if all goes as planned, continue on to visit church members in Togo and Cameroon.
The flight to Paris from Atlanta was particularly pleasant this time since I had a free upgrade to business class. Allow me a digression about said upgrade. Delta Airlines offers its diamond class (top tier) frequent fliers a choice of several perks each year. One of the possibilities is upgrade certificates usable on international flights. Last year for the first time, I qualified as diamond, with a mileage bonus from a premium credit card putting me through the last hoop (of which there are a number). I chose the four international upgrade certificates. Then I found that even with the certificates in hand, it’s not always possible to use them. Only so many seats on any flight are available for the upgrade. I tried about six times last year to use them and was only able to do so once.
The others will expire in March of this year, so I was happy to use another one on this trip. The translating flight home from Paris at the end of this strip has me only on a waiting list since no seats are currently available, which was the story for almost all of 2017. Like many things in the frequent flyer world, the programs sound great, but they don’t always deliver what is promised. In fact Delta has added another hoop for 2018 which means there is no way I will be able to reach diamond level for 2019. This was done, Delta assured me, to improve the flying experience of its customers. Apparently having my in the tier diminished the experience for others…. You are the weakest flyer, goodbye!
If you don’t fly much or at all, program levels and upgrades and such may not seem very important, but when one spends many hours and days on planes, upgrades make a huge difference: wider seats, better food, sometimes just food, etc. It means the difference between looking forward to a flight and just having to get through it as best one can. Flying is a significant part of my life and I have come to understand while frequent flyers will struggle so hard, strategize, and even fly unnecessary trips (which, for the record, I have never done), in order to maintain a status level. There are several successful websites and newsletter devoted solely to such questions. With Delta diamond level, though I didn’t have much success with international upgrades, my wife and I often receive upgrades on domestic flights which include our frequent trips to Montreal. There is no expense to the Church for the upgrades, and we have a much better flying experience. Of course the international flights are the most grueling, and so those upgrades are the most appreciated.
So back to the present trip, from Atlanta to Paris, I had an excellent meal with nice wines, good headphones to listen to music or a movie, and a seat that reclined down completely flat. A full size pillow and a duvet were provided. I was able to sleep about four hours, which is more than usual, and the quality of the sleep was better as well. The upgrade is supposed to apply all the way to final destination, but Air France, does not honor any upgrade past Paris. However, at the last minute, there was a plane change in my flight from Paris to Abidjan. An A380, the double decker Airbus, was swapped out for a 777 which has less capacity. Ground staff in Paris told me that there is an ongoing (but unreported in the press) strike by maintenance workers which means they can’t fly all their planes. The bright side of that for me was that, on the new plane, economy class was completely filled, so they upgraded me to premium economy, a new class intermediate between economy and business. Many airlines are instituting something like this. It’s like business class light, but it is still noticeably better than economy: wider seat (this is important on Air France because as the French are rightly proud of how they generally stay quite slim, their seats are the narrowest in the industry) enhanced menu, etc.
I slept several more hours on the six-hour flight to Abidjan, where we landed about 8:30 pm. I was able to use the premium lane (another advantage of top tier status) for immigration, so I had my Yellow-fever card checked, and my passport stamped in under 20 minutes. For many passengers it would take more than an hour. I picked up my luggage, put it all through a metal scanner, as everyone must, at customs, and walked out into the crush of people. I noticed the Burger King restaurant in the public zone of the airport. There are apparently at least three such restaurants in Abidjan now.
You may know that Thomas Friedman, the American journalist has posited the Golden Arches Theory of Conflict Prevention, which posits that no country, having received a McDonald’s restaurant has ever gone to war with another in the same circumstance. History has shown there have been a few exceptions, but if the same theory is true of Burger King, the United States need no longer worry about being invaded by Côte d’Ivoire…. 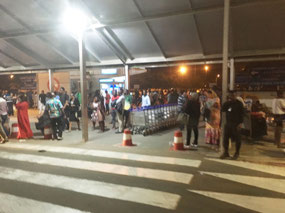 Arrival in Abidjan
The hotel shuttle picked up two other passengers beside myself and whisked the other two to the Ibis Marcoury, and then me to the Ibis Plateau, the latter in the business district a few blocks from the Presidential palace. Paul Tia called while we were en route, and we agreed that he would come to pick me up tomorrow at 9:00 am. Our service will be in Abidjan rather than at La Mé this time, which will mean less travel time for me.
By the time I checked in at the hotel it was 10:00 pm. Having dozed so recently I couldn’t sleep immediately so I finished my weekly newsletter and sent it out, and accomplished a few more tasks on my laptop, such as beginning this blog, and now shall turn in.
Other Entries
-

Good to have you back. Hope your journey is a safe one with much accomplished!

Have a safe and productive trip Mr. Meeker, we will be praying for you.

So glad that your trip started with a free update. Our prayers are with you.

So glad to read your blog and know you had a safe flight with some rest in "business class light." Looking forward to hearing about services and the brethren. Will keep you in our prayers.

We will be praying for you as you move forward on this journey. Thanks again for sharing your experience with us.