-
This morning we were to meet at 8:00 to get the morning going. This time Paul arrived with a son and a new driver, named Dosso, at 7:40. I invited Paul to have a quick breakfast with me and then I checked out and loaded my bags into a Mitsubishi Pajero turbo diesel. I like the Toyotas better, I’ve not had as good experiences with Mitsubishi (and in spite of myself the name always reminds of the Zeros manufactured by Mitsubishi that protected the bombers that sank the battleships at Pearl Harbor and killed so many young compatriots during WW2, for some reason Kawasaki doesn’t carry the same baggage), but this one sounded and felt fairly new and solid. Our first stop was at Treichville, where moneychangers congregate. We stopped at the first one we saw, and I lowered my window a few inches.  Several of his friends came over to observe and help if he needed more cash. The dollar has steeply fallen against the Euro, and so the CFA franc since this time last year.
We agreed on a rate and double-checked each other’s calculations, then he handed over the wads of 10,000 franc notes grouped by tens, and counted out the exact amount. He had counted, but I counted again, then handed over the brand new Benjamins, which he then counted again. We both nodded in agreement and then we drove off to the north and west.
On the outskirts of Abidjan, we stopped to fill the tank. It cost about $80 at close to $5 per gallon (1 Euro per liter). Then motored out again north on the autoroute. It costs $5.00 in tolls for the more than 240 km (150 miles) to Yamoussoukro, but in spite of poor construction already needed major repairs, the trip can still be done in about two hours. Nothing unusual happened along the way, which is good.

On the road to Man
We arrived in the capital just after 11:00 and stopped at the Brize. It was early for lunch, but there are no other good places (places a westerner would feel truly comfortable eating) along the way. To be frank, there is really only one such place in Man, I have eaten in many maquis there, but not really for the pleasure of it. 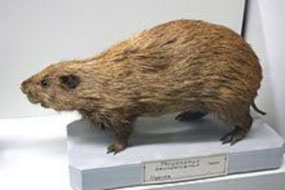 Greater Cane Rat on the hoof
I had spaghetti, the others fish or chicken with rice. Dosso our affable Muslim driver, ordered agouti, a name which means different things in different places, but which here means greater cane rat. I will show what they look like when on sale by the roadside and then what they look like in a plate. It’s a very popular dish in these parts, and as Forest Gump said: that’s all I have to say about that…. 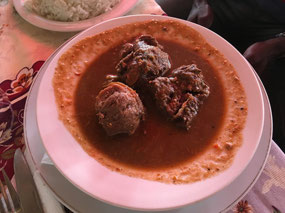 Greater Cane Rat for lunch....
As we ate we watched other expats come in for a leisurely Sunday lunch: a Frenchman with local friends ordered a three course meal with wine. A table of five young and joyous Americans, judging from their humor, aid workers rather than missionaries, could be easily overheard: we’re a loud people. A 4WD load of Chinese arrived, also loud but incomprehensible to me. Another Frenchman, from the east of France by his accent, rode up on a Harley Davidson with an associate on another bike, and headed for the bar. I remembered him from the last time we came through on a Sunday. There was also a long table of Ivorians just behind us, celebrating some event or another. With all the nations in one restaurant, I had a flash of Rick’s Café American, but here there was no sense of desperation. It was going to be a day of farniente. But not for us: we had miles to go before we slept.
Back on the road we rode by the out-of-place Notre Dame de la Paix with its massive dome thrusting up out of the savannah, and then on to the rotten roads from Yamoussoukro to Bouafle and Daloa.
One very funny thing happened at the checkpoint just before Daloa, where we have been hit by corrupt policemen many times. I had my rather large Nikon SLR in my lap so I could take photos along the trip. Usually I put my cameras away when we arrive at checkpoints to avoid the appearance of wealth and any temptation. This time I was too lazy and left it out in my lap, they were going to hit us no matter what. A policeman spotted my white face and I could see on his face, sensed a juicy bribe. He started toward us with a jaunty, confident air and a twinkle in his eye. I rolled my window down. He was about to start his opening gambit, when he caught sight of the big, professional-looking camera. Abruptly his mouth closed and he waved us on. The camera, and the unknown, really scared him! He didn’t want his corruption ending up recorded somehow, and who was I exactly to carry such a camera, a journalist perhaps: a pox on you, move on!
I rolled the window up and as soon as we were a decent distance away we roared with laughter. It was so obvious what had happened and it did us all good to see the corrupt policeman afraid for a change. I’m going to think about leaving my camera out from now on, may be wave it around a little. Don’t worry Marjolaine, I’m just thinking about it…. 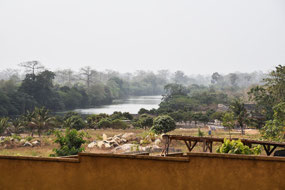 River crossing
Between Daloa and Duékoué the roads are not great but better, not so many potholes. From Duékoué to Man there are fewer potholes so we could move right along. We arrived in Man about 5:00 and met Séussié at the western crossroad that leads to Liberia and Sierra Leon. He wanted to show us the conference center right away, in case there was a problem. It was fine, the rooms were acceptable, based on what I’ve seen, better than everyone’s home. And the conference room would likely be hot (tin roof, open to the outside) but quiet enough.
After we met the owner and checked everything out, we drove to the Hotel des Cascades, the only hotel in town with wifi access to the Internet, and I checked in. I can no longer reasonably lodge without Internet access if it’s available. There are too many things with which to keep up, even not including this blog.
It was 18:00 by the time I settled it, so I invited the men to stay for dinner. They had fish or chicken with rice, and I tried the hamburger for the very first time. It included a strong local cheese which gave it quite a distinct taste. With the heat, I didn’t have much appetite in any event.
I said goodbye to everyone until 7:30 am tomorrow when we plan to start our day. Here in my room I was able to get on the Internet, but it was so slow (probably everyone in the hotel was online) that I couldn’t get as much done as I hoped. The hotel walls are so thin that, at one point I couldn’t not notice that the man in the room to my right became violently ill. He loudly emptied his stomach. I felt for him; been there and done that. It’s the worst when one is far from home, more or less alone, and in a borderline clean place. It’s an uncheerful experience. It seemed he had friends near enough to hear, and who came to help. I heard them speaking French with what seemed through the walls to be a French accept, so I suppose the malade must have been from there.
Once there was nothing left for him to bring up, things quieted down. If I had been him I would have decided not to eat anything for at least 24 hours and not even take liquids for 12 or more. I have found that works best in trying to recover from such a situation. I hope I haven’t eaten anything that he did in the restaurant here. I should know soon if I did.
On that cheery note, I will let the keys of my laptop cool off and call it a night.
Other Entries
-

Your Aguoti looks suspiciously like what they call Grasscutter in Ghana - and I'm sure it's the same critter. Even if I didn't know what the Bible says about what meats to eat, it is terribly unappetizing dinner fare! Travel safely, and know our prayers are with you.

From your pictures of the cane rat, posing, and stewed, I will remember "agouti" and forget the thought of it as a menu item. Hooray for the big power-camera victory over corruption in your present circle of influence! Looking forward to the next blog, and keeping you in our prayers.