-
This morning, Séussié came to the hotel with Dosso at 07:30. We drove to the Brioche d’or again to have our pain au raisin and coffee. As we drove through the market, I saw a billboard offering a special double selfie camera. It seems the whole world has gone crazy for selfies. What does that say about us? 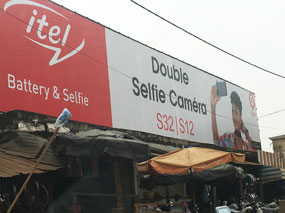 Everyone wants to take selfies....
Just before reaching the cafe, we came to a bush taxi loading area. It's amazing not only how many people they can cram into these large vans, but also how much they can pile on top and rope down. I seem them on the roads sometimes with their fenders almost on the pavement they are so heavily overloaded. And there are accidents pretty frequently. 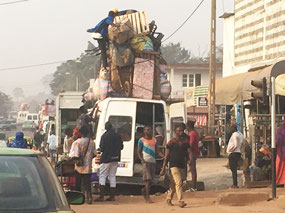 There's always room for more....
At the Brioche, They no longer bring warmed mile to pour in to the instant coffee. Now they bring a packet of instant milk to mix with the instant coffee, into which we now pour hot water. Not the best but to many people here packets of instant whatever are symbol of western status. At my hotels in Abidjan and in other cities on the continent I see locals preferring Nescafe to the strong brewed coffee which, admittedly sometimes isn’t that good, but is almost always better than instant.
From the café, we drove to a bank where we want to set up an account for Séussié so we can send money when needed for church activities like the Feast of Tabernacles. We went through a metal detector and were wanded. I was amused when the little multi-tool in my pocket set off the wand. I pulled it out and showed the guard. He’d obviously never seen one before; even though it has a knife blade in it, he made an OK motion and sent me inside.
We were able to find out what was needed to open an account: the equivalent of 50 dollars, two photos, and proof of address. We should have done this a while back. We drove on to a store where I bought water for everyone for the day. We were ready to start the session by 09:00. 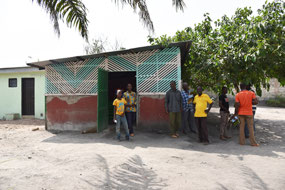 Our meeting hall
We started with the homework I had given them yesterday: take an example of pride in the Bible and analyze how it started, the root of it, how it could have been stopped, and what we can learn. One man took Cain, another Nebuchadnezzar and so on. It would a good exercise which allowed me to show concretely how to analyze, to think through a situation. I’m not sure critical thinking is taught very well in the west, certainly less and less in the US, but in places where formal education is quite limited, it’s a truly rare capacity.
The second question was to take Proverbs 6:16-19, where it says “These six things the LORD hates, Yes, seven are an abomination to Him:…” the first is “a proud look” then come other evils. The question was might pride, the first in, be involved in bringing about the others. One can actually make a strong connection to most if not all of the other sins. Again it was a good exercise in analysis, careful thinking. If they can learn that, it will make a major difference in their lives.
After the homework, I went on to the next presentation: Christian priorities. We read through and discussed the main priorities that the Bible gives for Christians: Seeking first the kingdom of God, maintaining our spiritual health, family relationships, service to the Church and so on. 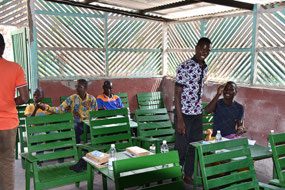 Break time
The point that elicited the most questions was about marriage. Most of these men were married before learning about the truths in the Bible, so their marriages were not contracted along biblical lines.
Here were some of the questions, with the short version of my answers:
Q.: What about customary marriage as opposed to civil marriage? (Customary marriages are not recognized or sanctioned by the state, but are by the families involved. To get a license to marry officially is expensive and involves running a maze of corrupt officials who all want their motivation, as bribery is sometimes called. So most people only marry “customarily”). So the question was does God recognize a customary marriage?
My answer: If the community and their families recognize them as married, then God accepts them as married too. Whenever possible the Church encourages people to be married civilly as well to be recognized as married by the state.
Q.: What if your wife won’t listen to you?
My answer: I said there was no magic solution to such situations, that improvement takes time and effort. I explained some of the differences in how men and women communicate, and the importance of showing love to one’s wife. Expressions of love and a communication style she appreciates can slowly help build a more understanding relationship
Q.: What if she won’t have much to do with until the cocoa harvest money comes in, and then she comes and sits in your lap?
My answer: Again work on expressing love for your wife; to extent that you can, make the marriage relationship about more than materiel things.
Q.: What if she spends your money before you can by running up debts when she knows money is coming soon?
My answer: I suggested doing the financial planning together and establishing a rule binding, on both spouses, not to go beyond a set spending amount without the consulting the other. We discussed the idea of consulting each other before making decisions, not often practiced here. I can remember years ago shocking some pastors in other parts of Africa when I said I wanted to check with my wife before making a decision. That seemed like a sign of weakness; I wasn’t really the head of the family. I had to ask my wife first?!. I explained that I still made the decision but wanted input from my wife first, that this was very helpful in our marriage. It was an uphill battle, but I think some progress was made.
Q.: How does a godly man go about marrying?
My answer: This was an excellent question for those not yet married. I explained the importance of understanding biblical roles for mates, and seeking a wife who would want to live by those roles. We read Proverbs 31, both from the perspective of seeking a wife with these qualities but also working to develop the qualities attributed to the husband in that chapter.
There were many more but that gives you a slice. 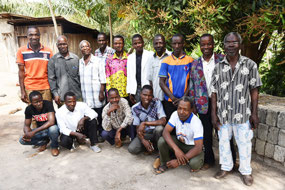 The participants at the leadership training
By the time we finished up it was after 13:00 and I wanted everyone to have time to eat and to get home to their villages before nightfall. I went to pay the bills for the 15 who had participated in the conference. Two nights’ hotel, and four meals for everyone, total under $300, our treasurer, Mr. Taylor, will be pleased!
Dosso then took me back to my hotel where I had a sandwich and then helped Paul learn a little about computing, showing him the basics and especially discussing security issues. He uses cybercafés regularly to keep in touch, so a little more instruction was very helpful to him.
Tomorrow we will visit several villages, including a new group, and also continue some counseling for baptism. It will be a long day on bad roads, but serving good people.
Other Entries
-

The towering bush taxi is amazing! Thanks for including the questions about marriage, communication, money and debt, and developing desirable qualities in marriage. It gives us a "slice" as you say of the challenges brethren have in understanding some of the concepts we take for granted.

Thank you for all your service to our brethren in this part of the world! The instruction to the leaders should help for many years to come - love the critical thinking exercises and the answers on better marriages.

Thanks for the comments on marriage questions. My wife and I had an interesting discussion about them!

Hello Mr. Meeker, I have just finished catching up on all your entries. It is always interesting seeing your approach to teaching and your answers to the different questions. Praying for your safety and a profitable trip.