In the deep bush 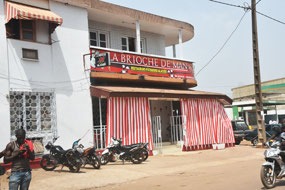 La Brioche de Man
This morning we started with our usual stop at the Brioche de Man (apparently they’ve modified the name), then we hit the road for a day of visits. We drove first to a village to the east of Man where a fine member named Batesti had lost his father a few days earlier. We came to pay our respects to the family and visit with the little group that gathers on the Sabbath. There was a photo of his father propped up on a chair next to him, as the family looked on and reflected on their loss. We were formally welcomed, and after some customary politesse I was welcomed to speak. I began by saying that the Bible calls death an enemy, that the hole it leaves in our lives is excruciatingly painful. We deeply mourn and miss our loved ones. Then I explained that the Bible promises that everyone will be resurrected, so we shall all be reunited with our lost loved ones. And that one day death will be destroyed; it will exist no more. 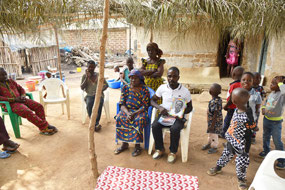 Batesti and his mother with the photo
I asked after the surviving family members, and talked briefly, then, as the custom is here, I made small contribution to the family, the equivalent of ten dollars, on behalf of the Church to help defray the funeral costs. I’m sure that will be the largest gift they receive. They were very touched and those speaking for the family, Batesti and his older brother, thanked the church sincerely. I took a photo of Batesti with his mother with his father’s photo. 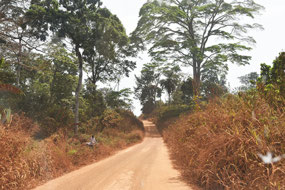 Heading out into the bush
Then we drove back through Man and then south about 30 km, then off the blacktop to another village where members were waiting for us. We talked, I gave some news, and they offered us a meal and orange Fanta. 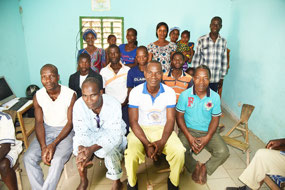 Second visit
I passed on the meal, it was only 10:00, but had some Fanta to be polite. Both Séussié and Paul ate the whole meal offered. At the Native Americans were supposed to have said: “You never know when you may next eat.”
Then we went farther on down the dirt road, another 20 minutes, to a village where a small group is transitioning to Sabbath observance. They had several questions for me, and which I answered going through an interpreter both ways:
Q.: Please explain again, why do you keep the seventh day Sabbath?
My answer: I explained how the Sabbath was created right after Adam and Eve. That is was so important to God that He rested himself, though He never tires, to set us an example. That Jesus said “the Sabbath was made for man”. And that the 10 commandments are still in force (Jesus said “if you want to enter into life keep the commandments” and gave examples to show He meant the 10. And there is absolutely no instruction in the New Testament saying the day of worship was transferred from the seventh day to the first. They knew all this, but wanted to hear it from the white guy. They’re following the Bereans example in a way.
Q.: What laws and rules do you have?
My answer: The Bible. We try very hard to live by every word that proceeds from the mouth of God. 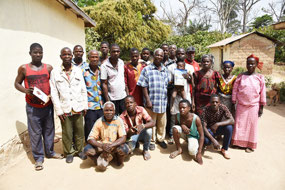 Third visit, the new group
Q.: What do you do?
My answer: Our mission is to preach the good news of the Kingdom of God to the world as a witness and spiritually care for those that God draws to His Son through us. I gave details about each aspect of that mission.
Q.: People say Jesus was black during his lifetime but white when he was resurrected. Does that mean God thinks it’s better to be white?
My answer: Jesus was of the tribe of Judah. Jews are not black, they are of the white race though sometimes a darker than I. So during His physical lifetime, Jesus was white. God said everything he made was very good and He made the races. Then I tried some humor: I told them it’s easy to see God loves black people. They asked how. I said “because he has made very many of them.” What there was of humor escaped them, but hopefully they got my point.
Q.: Do you just travel around preaching or do you also build church buildings.
My answer: The Church is the members that have and are led by God’s spirit. The New Testament has examples of Paul saluting member and “the church that is in their house.” So what is important is to meet and learn and encourage one another, not impress people with architecture. We do occasionally build halls, but only when other arrangements can’t be made. If the Western congregations all built church halls, I probably wouldn’t be able to come visit them in their village and teach them, the money would mostly go to buildings. So no, I said, we won’t be building Our Lady of Peace (the giant Catholic basilica in Yamoussoukro). They did laugh at that one!
Q.: What do you think of people and groups who say “we are the children of God and you are not!”?
My answer: I’ve met more than a few like that myself! The Christian example is one of humility and esteeming others better than one’s self. Boasting is condemned. So we don’t think well of such statements and approaches, and try hard not to be that way.
Q.: My family totem (that’s the exact word he used – the Chippewa word was adopted into French) is the antelope. Is my life in danger (if he were to eat antelope)?
My answer: Belief in totems is not biblical and we do not believe in them. Eating properly prepared antelope will not hurt you. Properly prepared is key. The Bible does gives us lists of meats God intends for us to eat and others that were not made to be eaten, but those rules are the same for everyone and nothing like totems.
There were more of course, but that’s a slice. 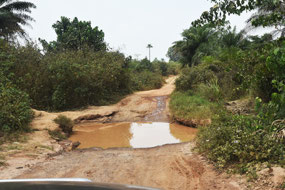 Bush piste
They thanked us very much for coming and we wished them well and said we’d keep in touch. Then we drove back to the blacktopped road and back to Man. This time we turned west on the road that leads to Liberia and Sierra Leone. We drove about fifty km west then another 20 on a dirt piste. Five men were waiting to counsel for baptism. Three I had already seen, so I spent 45 minutes with the two I had not seen before, giving them a reading list and explaining some basics. Only one of them could read and he had no Bible. I told him I would buy him one if he would commit to reading it at least little every day. He agreed, and said he would read it to his friend, they would prepare together. 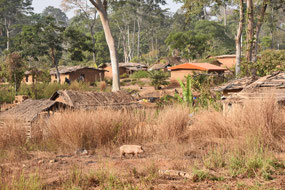 Fourth village
Then I spent an hour with the other men going through a number of subjects necessary to baptism. I could tell they had really been studying, and they had been examining themselves too. I met with each privately toward the end, I find that time is important, and I was happy to say to each of them they if they wanted to be baptized I would do so. They were overjoyed!
There was no use waiting, so I asked where we could perform the baptisms. They told me there was a pond about two km away. Stagnant water in the tropical bush is normally something to strenuously avoid. I’ve written before about the many parasites that lurk in Africa among other tropical zones. If you want to disgust and frighten yourself do a web search “African parasites pictures.”
But the Bible says “baptize them”. So we take what precautions we reasonably can (wear footwear, no open sores on your legs or have someone else to do the dunking, don’t linger in the water, shower or at least rinse off as soon as possible), then ask God’s protection and do your job. In all my years of doing this I’ve never seen any ill come of it, so I was told by one of the ministers who baptized me between Thailand and Laos in the dirty Mekong River, which has its fair share of parasites. I have found the same to be true during my career. Don’t tempt the Lord your God but do your duty; He does look after His children.

Joël, Serge and Michael, newly baptized
As we were getting ready at the pond, I found myself standing in a line of reddish ants, and quickly moved aside. I don’t know if or how badly those ants bite and I didn’t want to find out. Mostly things that bite in North America and Europe, bite harder here: felines, canines, ants….
The baptisms of Michael, Serge and Joël were moments of great joy for all of us in preparation for years. 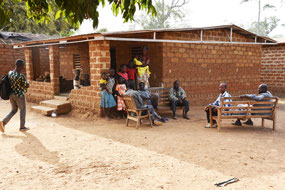 Michael's house
Michael’s wife served a meal which was quickly eaten and then we said goodbye, loaded up and drove the hour back to Man, arriving shortly before dusk. I still had a few more visits to do this night, personal counseling which went well. Now I hope to sleep well in preparation for the long drive back to Abidjan.
Other Entries
-

Thanks for the interesting account and pictures, especially the words of assurance for Batesti and family. The questions from the new group are thought provoking, the "totem," how to counsel men who can't read or have no Bible. Also, baptism picturing death of the old man takes on a new dimension in some waters! Sounds like the village visits have been productive and appreciated.

I was so touched to read of the preparations for baptism - a man who would read to his friend, preparing for parasite-known waters, etc. What joy there is for all of us to welcome these 3 men into the Body of Christ.