-
This morning I paid for my room, which had to be done in cash, no card payments here. It's a pain because it requires carrying rather large sums of cash around. I hide it in various places on my person and in my bags, so that if thieves get some they won’t get all. We loaded my luggage in the big Pajero and drove to the Brioche for our coffee and French pastries which might not be considered pastries by Americans or Brits. They are only very slightly sweet, nothing like a Danish or a bear claw. Even French desserts are usually not nearly as sweet as the Anglo varieties.
We drove on to the hotel where we held the conference and I paid for the remaining rooms, then we said goodbye to Séussié, until next time, and we started out on the long trek to Yamoussoukro, over the same bad roads we had taken to come. 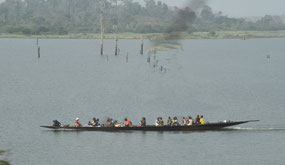 Crossing hydroelectric Lake Buyo
At Daloa I decided to double check my theory about keeping the camera in my lap. On arrival again the police saw my skin color and moved in for a bribe. This time the camera had no effect on the policeman. He ordered us to park in direct sunlight, which Dosos didn’t do, he parked next to the designated spot but in the shade. The policeman reprimanded him:
-I told you to park here, he gestured.
-I don’t want to drive off the pavement down that step, car parts are expensive.
-And if you are hit be a bus that will be more expensive.
-By God’s grace that will not happen.
-May God hear you (This is certainly taking God's name in vain....). They took Dosso off to check his papers. A while later, another policeman came to my window.
-Vous parlez francais?
-Yes, I said in French
-Why are you here?
-I visited friends in Man.
-Did you arrange to rent with the driver or his boss?
(I should have seen the trap here, but I wasn’t quick enough on the uptake)
-His boss.
-Aha! (unspoken)
Off he went with a smile, he had just pumped me for information he could use against Dosso, who didn’t have a particular document saying he could drive for a merchant, rather than dealing directly with the passenger (me). That meant they had a legal claim that he was not in compliance and they would require a bribe to fix it for him. I kicked myself for being too slow. 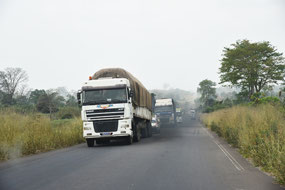 On the road again
In the end Dosso came back to the car to get his phone. “Ah no” he said to himself “if he thinks it will be that easy he’s wrong!” He called a friend in the Police Judiciaire (we don’t really have the equivalent in English, it comes from the Napoleonic Code in France.  PJs work for procurators, which are something like District Attorneys. Long story short, they have clout). A few minutes after his call to Abidjan, a policeman in street clothes arrived and pulled rank on the corrupt policemen. We were allowed to leave without paying anything. They had offered the rotten cop 2000 Francs (four dollars) but he wanted 10,000. In the end he got nothing. So all we lost was 45 minutes sweating in the sun. We gave the good cop a lift back into town.
I made a mental note, next time rotten cops pump me for information, I’m going to say “I know what you’re doing, and it’s wrong. I will not help you by answering your questions.” Or maybe simply “no, just no.” 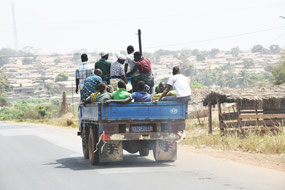 Any ride is a good ride....
We finally arrived in Yamoussoukro where we stopped for lunch at 1:30. I ordered a pizza of which I at half and had the other half boxed and gave it to Paul. He said he would take it to his wife, who she found out a couple of years ago, really like pizza. I had taken them out for lunch and ordered pizza, while they ordered the usual, fish in sauce and rice. She looked at my pizza as if it had come from an alien spacecraft. But I sent some home with her so she could try it and to her great surprise she found she loved it. Now I’m happy to send some her way when I can and Paul does too.
There is often little variety in the local diet.  Except for Doss he ordered agouti again.  To maintain my appetite I avoided looking at the bug chunks of rat in sauce, I just focused on my pizza.
We arrived in Abidjan about 5:00 and drove back to Treichville to change more money. Things always cost more than one thinks. Back at the Ibis, I paid Dosso and picked up my receipt and gave Paul some assistance too, then shook his hand and thanked him for his help and service.
Tomorrow will be a travel day, taking me on to my next stop: Lomé in Togo.
Other Entries
-

Interesting mud flaps on that blue truck. Thanks for the narative Joel, always fascinating.

I can see that along with protection you also need large measures of wisdom in your travels. Thankfully we know God promises to provide that too. Thank you once again for writing these blogs which provide incite and awareness.

It must be hard to stay ahead of all the attempts for bribery. Someday it will be different!