-
This morning I negotiated a taxi to the airport. He started by asking twice the going price, so we wheedled back and forth until we finally reached an agreement, at the going price. There was lots of traffic of course at 07:30 and there is much-needed road construction underway in Abidjan as well. But we still arrived at the airport at 8:00 which was my goal since the flight was scheduled for 9:50. Inexplicably on arrival, the departure time was posted at 10:50. I could have spent another hour in bed, which would have been good since I’ve developed a cough, probably due to the Harmatan, the seasonal dry north wind out of the Sahara that brings with it a great deal of dust. It causes many cases of respiratory complications. 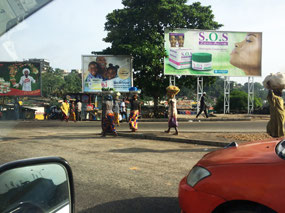 Sorry to hear of your recent ordeal. Praying for your safety and God's complete healing so you may carry on unhindered.

So sorry about your cough and will pray about your healing and return to full strength. The description of the airport fiasco must be the worst you've faced so far? Or is it? I hope these folks aren't on duty on your flight out!

What a horrible ordeal, and a very unneeded waste of time and energy! Sorry to hear about your cough and will be praying you get well soon to be able to continue with visits and speaking.

So sorry to hear of your ordeal praying for your speedy recovery!

I haven't been as diligent praying for your safety as I try to be. I will certainly ask God to protect you daily until you get back home. I'm also praying for a prompt recovery.

I am so sorry to read of your ordeal! I will continue to pray for your safety and that your will be feeling completely better.