-
This morning I still coughed quite a bit, especially first thing in the morning, but I felt pretty well. My voice was back although my head was still quite congested. At 10:00 I left my room and checked out. The Kloutsés were right on time to meet me and Mme Zikpi came by to say goodbye too. Her office building is just a short walk away from the hotel. It was a kind gesture on her part. We chatted briefly and said goodbye, then we all four drove to her office to drop her off, the three of us continued on to the airport.
We talked as we went, looking forward to my next visit when I would be able to spend time with the group and study the Bible together. Perhaps I can make it back around the spring festivals.
At the airport, the usual obstacle course began. There are two entrances open to the terminal. At each there was a line of passengers about 50 feet (16 m) long. We stood out in direct sunlight in 93° F temperatures. The lines moved slowly, because progress was determined by metal detectors just inside the building. All our bags had to go through, and our shoes and metal items. Every passenger in the airport had to go singly through one of only two screening points. It was not speedy. Once through this first check we could line up at the check-in counters. At the entrance to the line, I had to show my Cameroonian visa.  The agent checking this showed my visa to two men who were trying to negotiate their way through. “You see” he said in French, “this is a visa for Cameroon. This is what you must have to board this flight. This is what you don’t have.” The two men continued pleading, as I moved on. Check-in went fairly quickly because passengers essentially arrived one at a time.
The agent asked to weigh my two carryon bags which had weighed the same amount on the whole trip. She declared to be twice as heavy as I was allowed and that I would need to move some weight into my checked bag. I explained as I always do that they were filled with delicate electronics which could not go in the checked bag. She called her supervisor, who heard here query, looked at the bags, looked at me, and waved his hand. The status quo was allowed.
I walked to the emigration counter, where my passport was stamped and I was allowed through to the second security check. Electronics out of bags, pockets empty, shoes off, etc. I made sure to take my belt off and slip in in my shoulder bag, out of site…. I grabbed a chicken panini in the café, and settled down to wait for the flight scheduled for 1:10 pm.
The flight left close to on time and was two-thirds fill, so I had an empty seat next to my aisle seat, which is appreciable. The flight lasted two hours, during which a light lunch was served. Because of the congestion and in spite of having taken an antihistamine, I had great difficulty clearing my ears, which was painful. I finally did get them to clear toward the end. On arrival in Douala we were actually allowed to deplane by jet-bridge. Most often for regional flights, one deplanes down stairs onto the apron and then back upstairs into the terminal. I can establish no rhyme or reason for which flights do or don’t use a jet-bridge, but here it always feels like a luxury.
I knew the drill at the health desk, where the arrival forms were and so on, so I was one of the first through immigration. In baggage claim they now have screens above the two luggage carrousels to identify where the luggage will arrive, but the last few times I have been through, the screen has been wrong. It was again. At least there is not far to walk between the two. 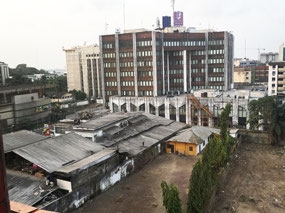 The view from my window
Out in the oppressive heat, I negotiated a taxi to the hotel. I ask the driver if everything was calm in Douala. He said it was, but all was not calm in the English zone, he told me. There is political tension in the north-west of the country, the part that speaks English, because of perceived unequal treatment and oppression. This is an ongoing problem. Several times to keep a lid on things the government turned off the Internet in the whole English zone. Somehow they have a kill switch for the Internet and they use it. Recently Nigeria extradited back to Cameroon about 50 opposition political leaders. They were arrested on arrival, but no one knows for sure what has happened to them since, which is causing considerable unrest in the region.
Other than that the country is calm, the driver finished up. I arrived at my usual hotel, the Ibis, about 5:30 pm.
I received a room on the seventh floor, facing north. It’s easy to see we’re in the tropics, most of the visible buildings are covered in a composite of rust, mold and peeling paint. Those that fare the best are covered in ceramic tile which can be high pressured washed every so often.
After having let my local contacts know that I had arrived, I had a lovely chat on FaceTime with my devoted and loving wife, without whose approval and support I would not have been able to serve in this region as I have for the last 22 years.
Now for an early night, hoping my health will continue to improve overnight.
Other Entries
-

Glad you're feeling better! Trust the rest of your trip will go well.

Yes, it's so good to read you are on the mend! I still shake my head at the 'money belt' debacle. You were wise to pack it away. We pray you will have a safe, healthy and productive rest of your trip.

Glad to hear you are feeling a little better and are in Cameroon. We will be praying for the visits and activities you've scheduled.