-
My wife and I have started our spring festival trip through parts of French Africa. This has been a very complicated trip to make because of the difficulties of obtaining a visa to Burundi, which I have not visited in a year, and because of a strike by Air France. This tale is full of twists and turns. Due to a disputed election, there has been a great deal of civil unrest in Burundi even open violence on the part of supporters and opposition to the president. As a result, the authorities do not automatically grant visas, as they used to  (with a US passport one could obtain a visa on arrival) and they take their time in granting them in an effort to keep out any outside influences wich might destabilize the situation. I was told a visa would be delivered in 15 business days. When that limit came and went, it seemed certain we weren’t going to be able to visit Burundi on this trip. I had my second passport in the Congolese consulate in New York to obtain a visa to visit that country, after this trip. The process there takes even longer for the DRC than for Burundi and is even less certain, again due to a disputed election (actually a cancelled election).
So, follow closely here, if I recalled the “Burundian” passport, I would lose all the fees involved, the process would end; I’d have to start over later. That’s hundreds of dollars. However if I recalled the “Congolese” passport, the process of obtaining that visa would continue; I could send the passport back to the consulate to have the visa stamped it when it was approved. So I decided to leave the one passport with the Burundian embassy, and recall the passport from the Congolese consulate in New York. I also changed our African zone tickets so that we would spend more time in Rwanda and none in Burundi. This was twice as much time as we needed in Rwanda, so I decided to spend two nights in Kenya, through which we were passing in any event, and where I could take my wife to our favorite game reserve. It’s been 18 years since she’d done that. I avoided re-booking our long-haul tickets, which at the last minute is always very expensive.
Then a snow storm hit New York and the Congolese consulate closed for the day. Then Air France went on strike in Paris, so there would be no flights to Lomé for two days! So we could not start our outward bound trip Thursday as planned, nor Friday because of the strike. We could not fly until Sabbath afternoon. At the same time, I was informed that our visas for Burundi had impossibly arrived and we could have the passports in hand by Sabbath morning! So after thinking the situation through, I changed the African tickets once again so we could visit Burundi, almost as planned. Thankfully, with the help of an expert travel agent, Delta and Air France agreed to consider our long-haul schedule changes as being mixed up with the strike, so they waved their change fees and did not charge us the much-higher last-minute fares. This probably saved the Church close to $2000, which would still have been less than paying for another complete trip to Burundi. 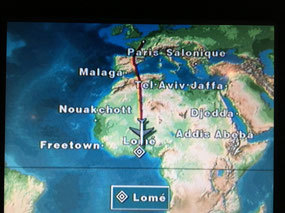 Flight map to Lomé
If you stayed with me through all that, you can imagine our confused and slightly-more-stressed-than-usual state of mind when we finally began the trip. On the positive side, we were able to use two upgrade certificates that had actually expired the day before we flew (thank you Delta!), and flew business class to Paris.
Business class means better food and drink, but also a seat that folds down completely flat: a few extra and better hours’ sleep. We arrived in Paris early this afternoon, and had just enough time to rush through security to our connecting flight to Lomé where we finally arrived at 7:30 pm. We should have been in Lomé Friday evening and have spent the Sabbath with the group, but with the delays that, of course, didn’t happen. We only had Sunday night with them, but we went straight to Guy and Odette’s home where the little congregation had gathered.
We greeted everyone all around, and sang a hymn. Then I gave a long news update 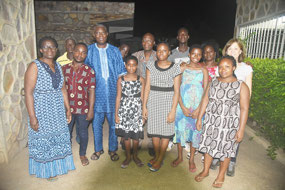 Sunday night in Lomé
about the work of the office and answered about a dozen Bible questions, a Bible Study format this group in particular really enjoys. Then we had a meal of fish, yam and tomato-onion sauce with a local hot sauce, and we fellowshipped until our eyelids grew too heavy to continue.
We were driven to our hotel for the night and are pretty certain we’ll sleep well tonight!
Other Entries
-

What a challenging beginning to your trip! Glad your plans finally came together and you are safely on your way. We look forward to following along and trust everyone will be pleased to share time with you both.

What an ordeal!!! So glad you were blessed with a way, though stressful, to still visit in Burundi. Praying for the rest of your trip to be less complicated!

Wow! We're thankful that the details worked out, although we regret the terrible stress. We can only imagine the challenges you face on this entire journey. Thank you both for your dedicated service!