Another night on a plane, arrival in Kenya

-
Yesterday we slept as late as we could, before having a quick breakfast and being driven, a little before 11:00 am, to the airport by Pierre. We thanked him sincerely for his help and began the frustrating process of getting into the new Lomé airport. We went to the back of the long line, in direct sunlight and high 80° F temperatures. Let the perspiration begin! This line is caused by a security scan to passengers before they’re allowed to enter the terminal. There are only two scanners for all the passengers trying to move inside, so the lines move slowly. After half an hour we finally put our affairs through the scanner and walked through the metal detector. Then we went to the check-in counters and waited again in line. Finally checked in, we cleared immigration and went through the “real” security check.
We waited another hour and boarded the ASky flight for Abidjan. The flight left and arrived on time. At the airport we entered limbus passageorum, that much-feared intermediate place of restraint between the heaven of the departure lounge and the hell of a holding cell. We had not been able to check our bags from Lomé to Nairobi and so had to claim and recheck them in Abidjan. But the airport is not organized to allow that easily done.
So after we explained our situation, an immigration official held our passports while we went to claim our checked luggage. Then, passports back in hand, we were led through a back hallway into the check-in area. Here were told to sit until the Kenya Airways counter opened, which was several hours away. I was hungry so I asked the guard at the entry if he would hold my passport while I went to get a whopper (yes indeed the Abidjan airport has a Burger King in the arrivals area!). He asked gruffly, “do you have a visa?” I said I did not. “Then you stay inside” he ordered. So we remained for several hours until the KQ staff arrived and we could check in. Then we were directed through immigration, even though we weren’t immigrating or emigrating, just transiting. Another security check for good measure, and we finally reached the lounge where we had a bit to eat before it was time to board for the overnight flight to Nairobi. 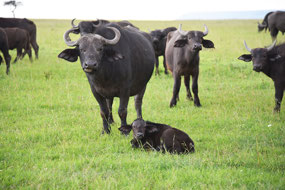 Cape buffalo cow and calf
After the six hour fight, and three time zones, we arrived in Nairobi a little before 06:00 having slept two or three hours. As we approached the visa counter we were surprised to see elder John Pentlin, whom we knew from our time in Missouri, occasionally visiting Kansas City, and another adventurous member standing in a parallel line. They were on their way to Migori, in western Kenya for the Passover and first part of UB. What a coincidence to meet in Nairobi!  We chatted briefly and then found each other again at baggage claim where we talked until our bags finally arrived. They headed off to their hotel and Marjolaine and I headed to our transportation to the Mara Conservancy, where we arrived a few hours later. 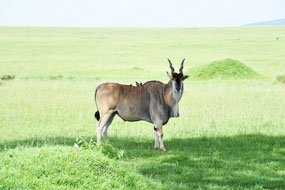 A normally shy eland
We had an afternoon game drive, and as always the animals were very plentiful. The east African plains represent one of the most amazing ecosystems in the world. There were antelope of many sizes from the little dik dik (a little over a foot high fully grown) to the huge eland, which can weigh close to a ton! There were lions and elephants, and giraffes, oh my! 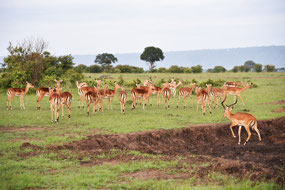 Harem of impalas
There are zebras and jackals and spotted hyenas. There are vultures and marabout storks and yellow billed storks, and fish eagles and crowned cranes, and Egyptian geese. I think this is the most amazed one can be at the splendor of God’s animal kingdom. The African savannah ecosystem is a stunning and overwhelming masterpiece. 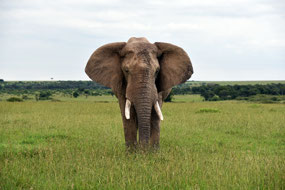 OK we're backing away....
After dinner, back in our tent, we can now hear hippos coming up out of the water to graze in the darkness.
Hopefully they won’t wake us during the night.
Other Entries
-

It must help to have a sense of humor while waiting---in limbus passages rum. What beautiful photos from the game preserve. Everything looks lush and green, and it appears you saw an abundance of animals--a nice change of pace from the uncertainties of travel.

Great slides of game reserve! So sorry to hear of the added difficulties to this years journey. Pray all improves for the remainder of the trip!