A day by the Mara River

-
The hippos did wake us in the night, they are noisy brutish neighbors, grunting and roaring back and forth to keep track of where everyone is in the darkness. In the morning we found tracks of at least one hippo only 20 feet from our tent! We had a blissful day, with a morning game drive leaving just before dawn but just after coffee. 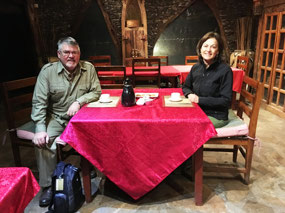 Pre-dawn coffee
The sun rose over the plains dotted with thousands of animals. Our driver, James is very knowledgeable and kind. I have the chance to visit a game park somewhere for a day or two every few years, but this was the first time since 2000 that Marjolaine was able to visit the Mara area and she is thrilled. 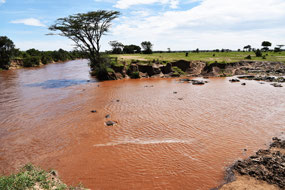 Hippos in the Mara River 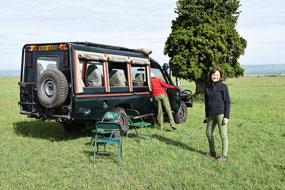 Breakfast
James brought our breakfast in a cooler and about 9:30 found a spot on a hill with good visibility all around (so no predators could sneak up on us) and spread breakfast out on the ground: fresh fruit, boiled eggs, toast and butter, beef sausages, and coffee! It’s a particular thrill to stand on the savannah and feel fully immersed in this nature. 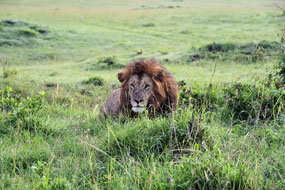 Eye to eye
After breakfast we made our way back to the camp where a guard carrying a 30.06 knocked on our tent soon after we arrived back. He was there to take us on a walk outside the camp.
This is also a joy, to walk out among the animals. There is also the thrilling whiff of danger to walk where lions and leopards hunt and where hyenas, with their crushing jaws, scavenge pitilessly. 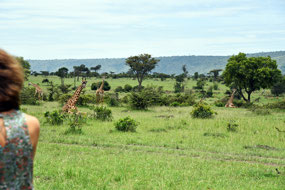 Walking with giraffes
We could meet an elephant or a cape buffalo, and there are plenty of hippos around, the latter two especially dangerous to people. We walked out several miles, seeing many Thompson gazelles and impala, and walking up to a herd of giraffes. The ranger did not walk us straight at them, but had us approach obliquely, a less threatening manner, and so we were able to get quite close. 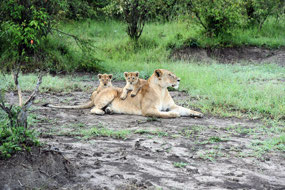 Mom and cubs
After lunch we rested a few hours before heading out at 4:00 for the afternoon drive. Again we saw hundreds if not thousands of animals including a pride of lions finishing up a recent kill. There were young cubs which are always a delight to watch. They are cute and cuddly and they play lion games, stalking each other clumsily, chewing on mom’s ear, climbing up her back and falling down the other side, all of which she takes patiently. 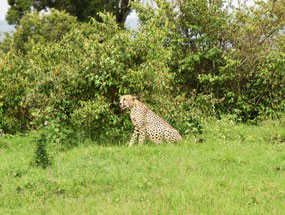 Cheetah on a kill
We also came on a cheetah eating a fresh kill, a baby warthog, James told us. A sad thought for the pumbas, but necessary for the duma (you just learned some Kiswahili…).
We’ll head to bed early again tonight, we’re still trying to catch up on sleep after short hours and jet-lag.
Other Entries
-

Hello Mr and Mrs Meeker, Delighted to be following on again with your trip. So happy you can make this one together. The photos of the animals are stunning. Keeping you in our prayers.

Wow what great photos. Impressively green and what a thrill to walk about and get up close to the giraffes. Wonderful picture of the lion also the lioness and Cubs, especially cute description of their lion "games." How nice that James is knowledgeable and such a good guide.

I'm so happy that you were both able to enjoy the wild life in Kenya. The photos are wonderful. I especially like the lioness and cubs. Hope you'll get some needed rest as you continue your travel and responsibilities. Praying for you!